When did Hillary Clinton become the ultimate Troll Queen?

Since unpacking her defeat in the 2016 election and the political trauma that likely came with it, Hillary Clinton has emerged as a glorious political foil to Trump.

The former First Lady turned Troll Queen has made it her mission to publicly call out Trump whenever, wherever, for his disastrous leadership — and she does so with calculated shade.

Just last week, after it was reported that the U.S. has surpassed China and Italy with the most novel coronavirus cases in the world, Clinton tweeted, “He did promise ‘America first.’”

Days earlier, Clinton warned Americans to ignore Trump’s suggestions for coronavirus treatments, tweeting, “please do not take medical advice from a man who looked directly at a solar eclipse.”

He did promise “America First.” https://t.co/bzks3hqCUE

Please do not take medical advice from a man who looked directly at a solar eclipse.

These scorching digs are some of many insults hurled at Trump by Clinton over the years. But she doesn’t just insult him — she categorically eviscerates him.

In fact, Clinton’s shade-throwing is so majestic it’s almost hard to believe it’s actually her. Perhaps it’s a clever young staffer who overindulges in Real Housewives and RuPaul’s Drag Race? If so, he or she needs a raise.

Either way, through her unwavering dedication to calling Trump out on his many shortcomings as a president from the sidelines, Clinton continues to show us that she stays ready to remind the American public how terribly wrong they were to elect him in the first place. At the very least, she provides us with some much needed comic relief to keep us all from crying.

READ MORE: Omarosa says Hillary Clinton was ‘robbed’ at the chance to be president

Shady Hillary, of course, isn’t what many remember from the career politician during her campaign run against Trump in 2016. Clinton was accused of being a robot and often chose to take a more even-keeled approach to her opponent’s crazy. 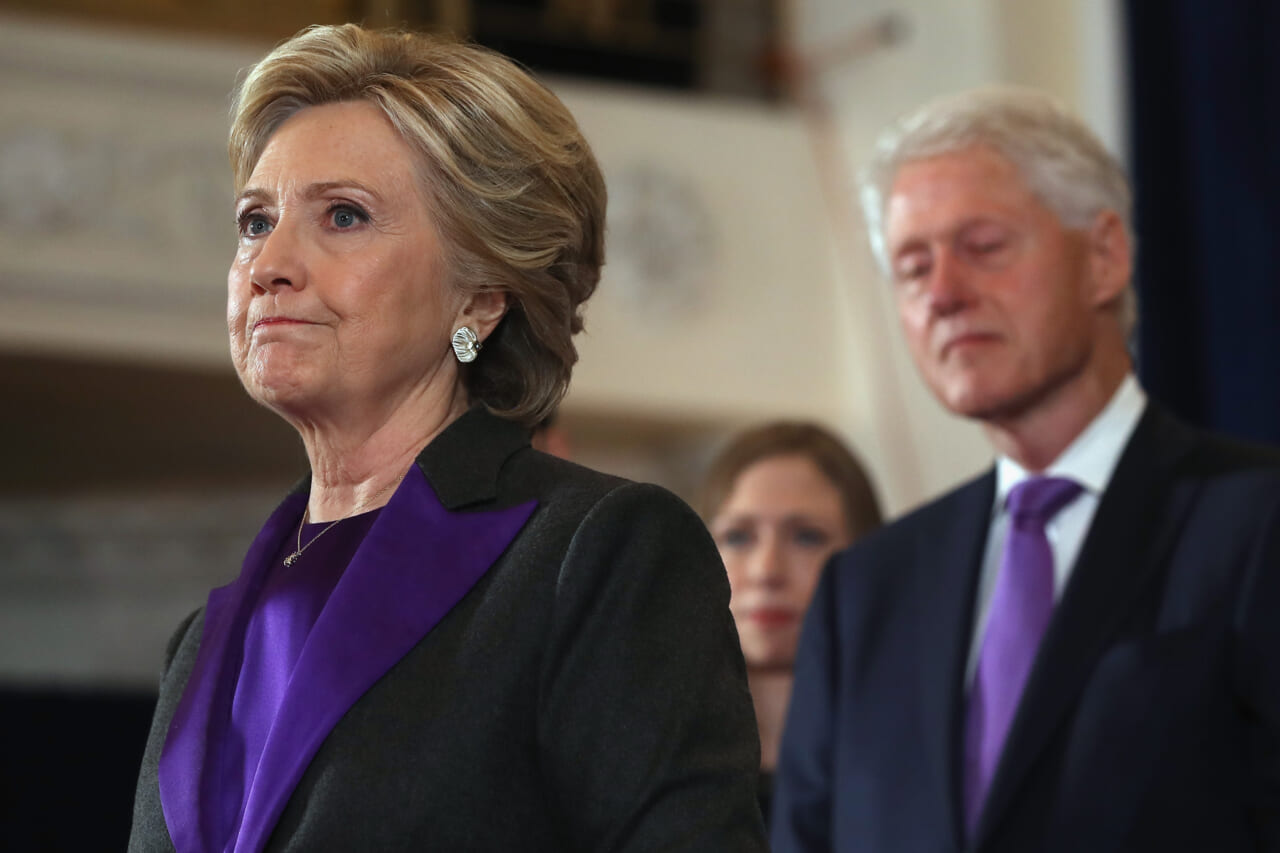 Former Secretary of State Hillary Clinton, accompanied by her husband former President Bill Clinton, pauses as she concedes the presidential election at the New Yorker Hotel on Nov. 9, 2016. (Photo by Justin Sullivan/Getty Images)

In the Hulu documentary, Hillary, which chronicles her historic run for president, Clinton admits that she was scared of coming off as too emotional. If she reacted too strongly to Trump’s jabs, she would face sexist accusations of being unstable and not having control of her emotions. What’s more, Clinton admitted that she often masked how she really felt throughout her political career as a governor’s wife turned ambitious stateswoman.

Recalling the infamous moment when Trump towered over her as she spoke during a CNN presidential debate Clinton said, “If I had wheeled around and said ‘Back up you creep! You’re not going to intimidate me,’ would I sound angry? Would people recoil from that?”

But that Hillary is so 2016. Since licking her wounds and returning to the public eye — this time as a citizen unbeholden to a constituency for the first time since entering politics with her husband — Clinton has held her foot on Trump’s neck and has yet to let off. And to be honest, it’s appreciated.

Unlike the current Democratic presidential candidates and most Democratic leaders in Congress, the “new” Hillary gives it to Trump straight with no chaser and she’s doing it on a world stage.

Maybe she’s fed up, or maybe this isn’t a new Hillary at all. As her documentary also points out, Clinton trafficked in shade long before the mainstage even had a name for it.

After George W. Bush said he looked into Russian President Vladimir Putin’s eyes and saw his soul, then-Senator Clinton famously said, “I could have told him — he was a KGB agent. By definition, he doesn’t have a soul.” 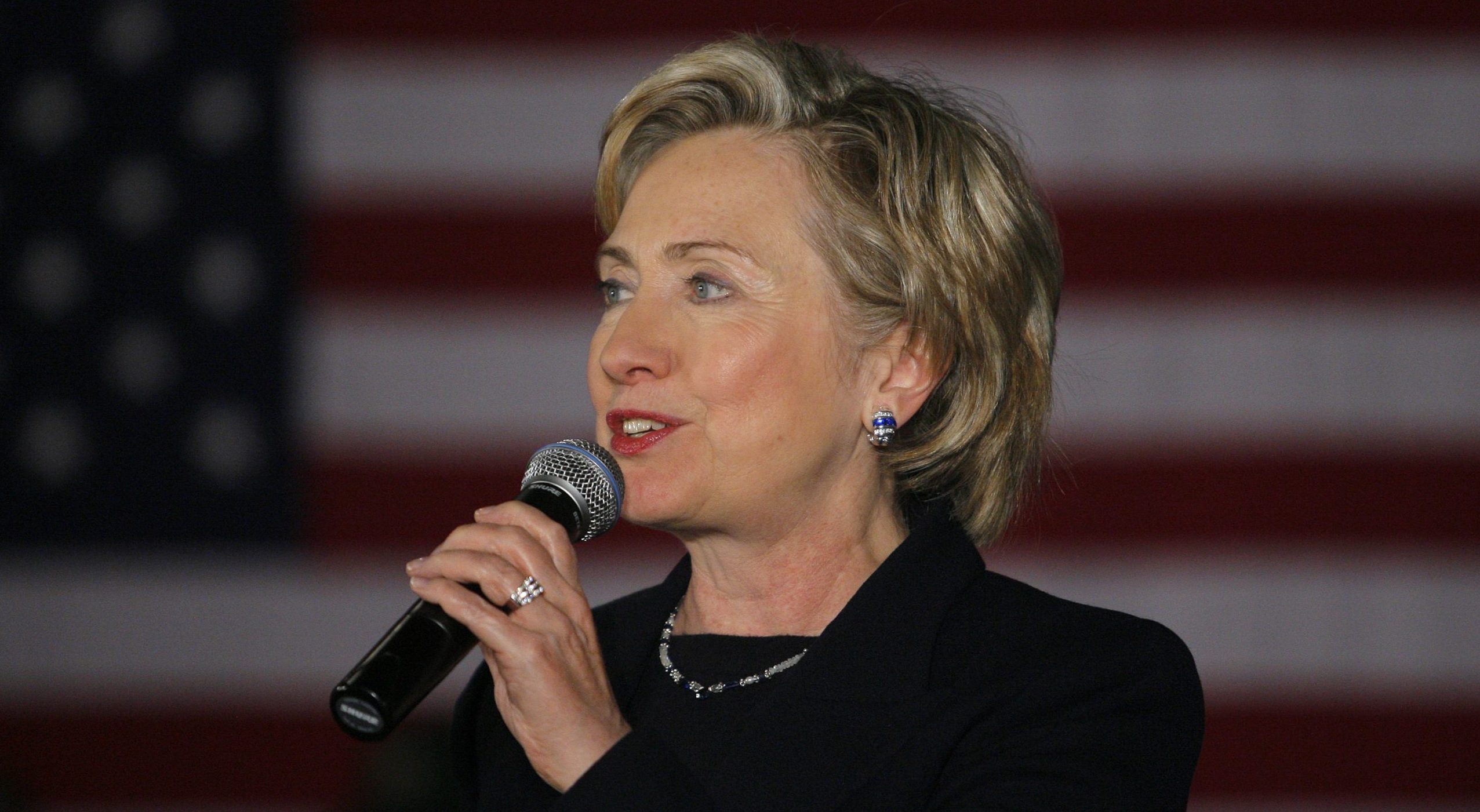 Maybe it’s not that Hillary has become a new Hillary, but rather, at 72 years old and over 50 years of public service, she has let go of her fears of judgment as one of the most recognizable and polarizing women in the world. Maybe she’s finally showing us the fullness of who she is. Smart, accomplished, and yes, maybe even a master at throwing shade.

That apparent mastery, however, can’t be mentioned without acknowledging the several Black women in politics who have read Trump like only a Black woman could. Sen. Kamala Harris, Rep. Ayanna Pressley, among others, have been unapologetic in their public scorns of the president.

The true crown, of course, belongs to Rep. Maxine Waters, affectionately known as Auntie Maxine, who has called for Trump’s impeachment long before the rest of Congress officially impeached him. Just this week, Waters gave Trump a virtual ass whooping in response to his poor response to the COVID-19 pandemic.

Perhaps Clinton, who followed in the footsteps of Shirley Chisholm in her quest to be the first woman president, was inspired yet again by the strength of Black women, who are essentially the grand marshals of shade-throwing.

Instead of the ‘polite,’ polished politician we’ve known her to be, maybe Clinton instead chose to give us what America apparently can’t get enough of; a good ole unadulterated realty-TV mess. At least judging from who currently occupies the White House.

In fact, perhaps the real joke is on us. Touché, Hillary, Touché.

Gerren Keith Gaynor is the Managing Editor at theGrio. The New York Times-published journalist previously served as an editor at Fox News, BET and Vibe magazine. He earned his master’s degree from Columbia School of Journalism and a bachelor’s from the illustrious Morehouse College. Follow him @MrGerrenalist on Twitter and Instagram.