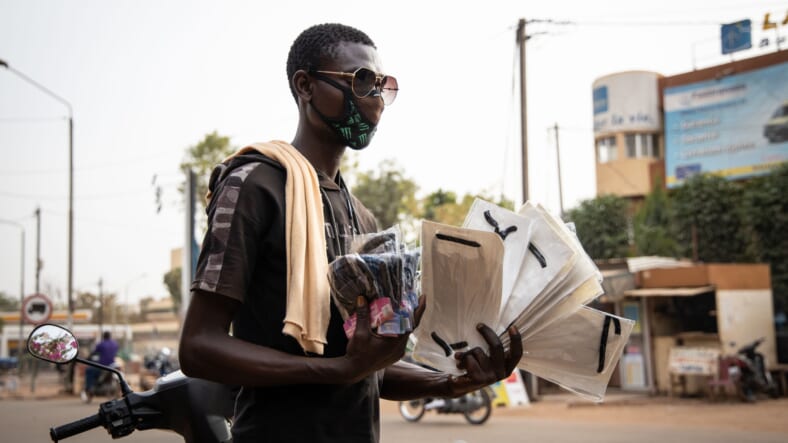 A street vendor wears a face mask as a preventive measure against the spread of the new COVID-19 coronavirus while selling face masks in Ouagadougou. (Photo by OLYMPIA DE MAISMONT/AFP via Getty Images)

Two French doctors are being slammed for suggesting that vaccines for the novel coronavirus should be tested in Africa during a television broadcast.

According to the BBC, Jean-Paul Mira, head of intensive care Cochin Hospital in Paris, was featured on the TV channel LCI, debating with Dr. Camille Locht, Inserm Health research group’s head of research, about using a tuberculosis vaccine to combat COVID-19 in European and Australian trials.

Mira then suggested that trials should take place in Africa.

“A bit like as it is done elsewhere for some studies on Aids,” Mira said. “In prostitutes, we try things because we know that they are highly exposed and that they do not protect themselves.”

But this evil people want to start vaccination in Africa#AfricansAreNotLabRats#DearMrPresident
pic.twitter.com/PUxUdvky6W

He questioned that since Africa had “no masks, no treatments, no resuscitation,” would trials in Europe and Australia work as planned since they have access to personal protective equipment (PPE).

Dr. Locht replied, “You are right. We are in the process of thinking about a study in parallel in Africa.”

Reactions to the doctors’ statements hit social media, where many were irate and offended. Online outrage also led to the hashtag #AfricansAreNotLabRats to become a trending topic on Twitter.

Among them was Didier Drogba, former star of the Chelsea Football Club, and captain of the Ivory Coast national soccer team.

“I would like to vividly denounce those demeaning, false and most of all deeply racist words,” Drogba tweeted.

It is totally inconceivable we keep on cautioning this.
Africa isn’t a testing lab.
I would like to vividly denounce those demeaning, false and most of all deeply racists words.

Helps us save Africa with the current ongoing Covid 19 and flatten the curve. pic.twitter.com/41GIpXaIYv

Africa is currently the continent that is the least afflicted with COVID-19, with only 7,064 positive cases and 290 deaths.