As the coronavirus death toll rises, officials use refrigerated trailers to store the overflow as an alternative to sending the dead to potter's field 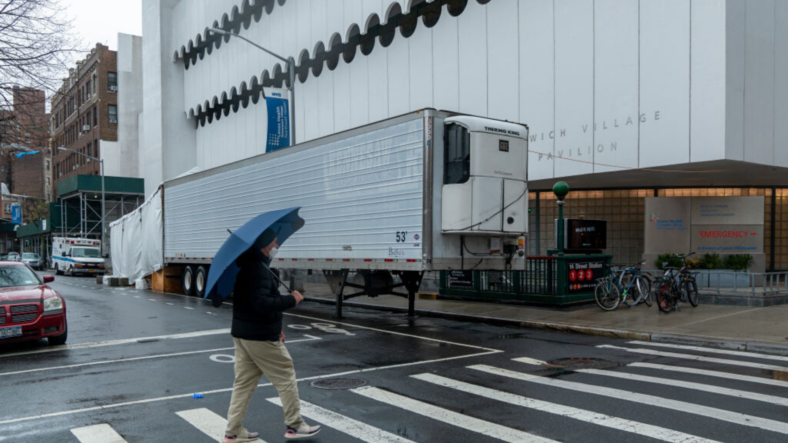 NEW YORK, NY – APRIL 13: A person walks by a refrigerated trailer intended to house the morgue over flow at Lenox Health in Greenwich Village. (Photo by David Dee Delgado/Getty Images)

In a grim report out of New York City, the city will start transferring bodies of victims of COVID-19 from refrigerators and morgues to freezer trucks to preserve the remains of victims.

The trucks will serve as an alternative resting place for those who have succumb to the respiratory disease. This way victims of the virus will not have to be temporarily buried at the public cemetery on Hart Island as previously proposed by local politicians.

Hart Island is a small park north of the Bronx. Since the late 1970s, Hart Island has been used to bury the unclaimed dead of New York City. The island is only accessible via ferry and the dead are buried by inmates of Rikers Island.

According to the New York Daily News, “Freezing bodies will also give families and funeral directors more time to make arrangements, as well as alleviate pressure for staffing and resources like stretchers in hospitals and morgues.”

Bodies of victims of the virus can be stored in the freezers for up to a year.

Governor Andrew Cuomo has gained national acclaim for his handling of the pandemic and his informative, but empathetic daily press briefings. The governor met with President Donald Trump on Tuesday at the White House. Cuomo expressed that the president has committed to increasing testing for the virus and antibodies. He did not give a date for when that testing would take place.

Governor Cuomo and other governors across the country have stated emphatically that testing is key to reopening their states.

READ MORE: Bodies left in beds at nursing homes as NYC morgues run out of room

Cuomo’s younger brother, Chris is a well-known anchor for CNN. Their banter during the beginning of the pandemic was funny and well-received. Chris Cuomo recently rejoined his family after being quarantined from them while himself battling the coronavirus.