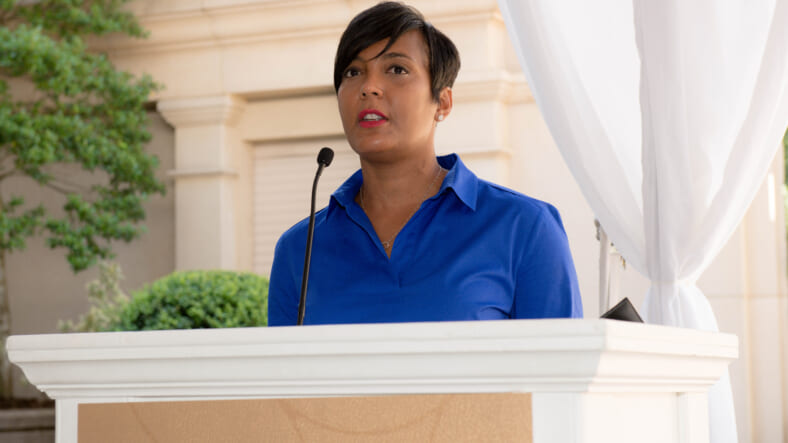 Atlanta Mayor Keisha Lance Bottoms will not be bullied by racists for refusing to reopen the city amid the ongoing COVID-19 crisis, and luckily she has allies and mentors that can assure her she is not alone in her fight.

Bottoms is speaking out about the disturbing text message she received Wednesday night after calling out Gov. Brian Kemp’s plan to reopen the state during the pandemic. She posted on Twitter a screenshot of the message from an anonymous sender, who called her the n-word, and said for her to “just shut up and re-open Atlanta!”

Bottoms said she received the text while her daughter was “looking over my shoulder. She included in her Twitter post, “I pray for you,” along with a quote from Dr. Martin Luther King Jr., “conscientious stupidity or sincere ignorance.”

“That was more concerning to me than anything,” the mayor said.

When asked about the racist abuse from a city council member during a meeting on Thursday, Bottoms noted, “We are not cowards. Cowards don’t run for office.”

Andrew Young, former congressman, and United Nations ambassador, speaks during the discussion panel, LBJ and MLK: Fulfilling a Promise, Realizing a Dream, on the second day of the Civil Rights Summit at the LBJ Presidential Library April 9, 2014, in Austin, Texas. (Photo by Rodolfo Gonzalez-Pool/Getty Images)

Civil rights activist and former ambassador Andrew Young understands too well what Bottoms is going through. As the second Black person to serve as mayor to the City of Atlanta, he was able to put these racist attacks in perspective during a private call. He reminded her that “white supremacy is a sickness.”

The offensive tweet was in response to Bottoms’ pushing back on Kemp’s decision to allow beauty salons, barbershops and tattoo parlors to reopen on April 24.

“I have searched my head and my heart on this and I am at a loss as to what the governor is basing this decision on,” she said earlier this week. “You have to live to fight another day, and you have to be able to be amongst the living to be able to recover.”

President Trump also agrees that Kemp’s re-open agenda during these uncertain times is not a good look.

“I told Georgia’s governor Kemp that I strongly disagree with his decision to open certain facilitates which are in violation of phase one of the guidelines … but at the same time he has to do what he thinks is right,” Trump said at his daily briefing on Wednesday.