Former Georgia Gubernatorial candidate Stacey Abrams speaks at the National Action Network’s annual convention, April 3, 2019 in New York City. A dozen 2020 Democratic presidential candidates will speak at the organization’s convention this week. Founded by Rev. Al Sharpton in 1991, the National Action Network is one of the most influential African American organizations dedicated to civil rights in America. (Photo by Drew Angerer/Getty Images)

Conservative journalist Marc A. Thiessen has offered up an explosive opinion on Stacey Abrams in The Washington Post.

The writer, who covers foreign and domestic policy, recently said in his article that if Abrams is selected as Joe Biden‘s vice-presidential pick, she would “displace Sarah Palin as the least-qualified person ever to serve on a major-party ticket.”

The opinion piece references another 2008 article that claimed the choice of adding Palin to the Republican ticket “sent Democrats, independents, and moderate Republicans scurrying” to (then) Sen. Barack Obama. According to Thiessen’s reasoning, tapping Abrams would create a similar political environment.

The writer notes that Abrams is popular with Black, Hispanic, and Asian American voters.

He also states, “whatever advantage Abrams might bring with minority voters who are already in Biden’s camp would be dwarfed by her obvious lack of readiness for the presidency, which would drive away the moderate suburban Republicans and independents in the swing states that Biden needs to defeat Trump.” 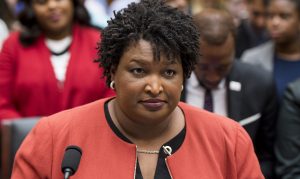 Stacey Abrams, former Democratic leader in the Georgia House of Representatives and founder and chair of Fair Fight Action, prepares to testify during the House Judiciary Subcommittee on Constitution, Civil Rights and Civil Liberties hearing on the Voting Rights Act on Tuesday, June 25, 2019. (Photo By Bill Clark/CQ Roll Call)

Thiessen goes on to detail what he perceives as Abrams’ lack of qualification.

“Abrams’s claim to fame is that she lost Georgia’s governor’s race in 2018,” the writer argues. “Indeed, she has never won a statewide race. The highest office she has ever attained is minority leader of the Georgia state House of Representatives, a part-time legislature.”

Thiessen notes that Abrams’ foreign policy experience includes serving as a “former term member of the Council on Foreign Relations” which is listed on Abrams’s bio.

If elected, Joe Biden will be the oldest person elected to the presidency. Thiessen posits that this fact alone makes his VP pick extremely important.

Abrams remains an extremely popular choice, she has publicly advocated being Biden’s choice. She has also publicly stated that she does plan to run for President of the United States one day.