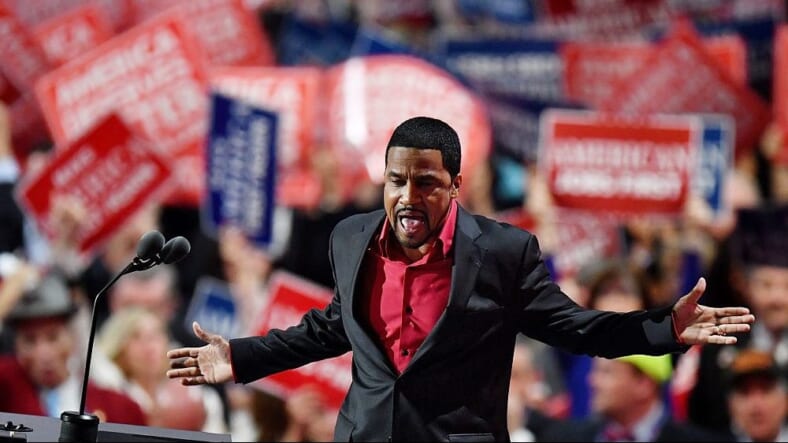 Darrell Scott, Senior Pastor of New Spirit Revival Center Ministries, gestures after delivering a speech on the third day of the Republican National Convention on July 20, 2016 at the Quicken Loans Arena in Cleveland, Ohio. (Photo by Jeff J Mitchell/Getty Images)

Pastor Darrell Scott has doubled down on his support for President Donald Trump, reviving his belief that he is the “most pro-black president” ever.

Scott, who is part of Trump’s National Diversity Coalition and served on the president’s transition team in 2016, made the bold statement at a roundtable event in Michigan on Thursday, Newsweek reports.

Scott accompanied Trump in his official visit to the state, during which he met with Black Michigan leaders, and the idea was touted of bringing a “new” historically Black college to Detroit.

“But when I say pro, I’m saying pro in the sense of being proactive. He’s been proactive rather than reactive to issues concerning minorities, underserved and disadvantaged communities than any other president in my lifetime,” Scott added. “I really believe history is going to be kinder to you, Mr. President, than fake news media is today.”

And with that, Trump reportedly laughed and said: “It can’t be any worse, thank you.”

U.S. President Donald Trump shakes hands with Pastor Darrell Scott, co-founder of the New Spirit Revival Center, before Trump signs an executive order during an event in the Rose Garden to mark the National Day of Prayer at the White House May 3, 2018 in Washington, DC. (Photo by Chip Somodevilla/Getty Images)

Scott made similar comments about Trump in 2018 during a meeting with Black, inner-city pastors at the White House, according to The Philadelphia Tribune.

“This is probably going to be, and I’m going to say it at this table, the most pro-black president that we’ve had in our lifetime,” he said at the time. “Because, and I try to analyze the people I encounter, this president actually wants to prove something to our community.”

Scott added, “the last president [Barack Obama] didn’t feel like he had to.”

“This administration is probably going to be more proactive regarding urban revitalization and prison reform than any president in your lifetime,” he said.

Additionally, a separate poll conducted this month suggests Trump’s approval rating among Black voters dropped further over his handling of the coronavirus pandemic.

Pastor Darrell Scott: "This President has been the most pro-black president in my lifetime." pic.twitter.com/KeoP7QRN5j