Trump had already banned certain travelers from China, Europe, the United Kingdom and Ireland and, to a lesser extent, Iran.

WASHINGTON (AP) — President Donald Trump on Sunday further limited travel from the world’s coronavirus hotspots by denying entry to foreigners coming from Brazil, which is second to the U.S. in the number of confirmed cases.

Trump had already banned certain travelers from China, Europe, the United Kingdom and Ireland and, to a lesser extent, Iran. He has not moved to ban travel from Russia, which has the world’s third-highest caseload.

Trump had said last week that he was considering limiting travel from Brazil.

White House press secretary Kayleigh McEnany cast the step announced Sunday as another “decisive action to protect our country” by Trump, whose management of the crisis has come under sharp scrutiny.

The U.S. leads the world with more than 1.6 million confirmed coronavirus cases and a death toll that is expected to surpass 100,000 later this week, according to a tally by Johns Hopkins University.

The White House did not immediately respond to queries about whether a travel ban would be imposed on Russia. 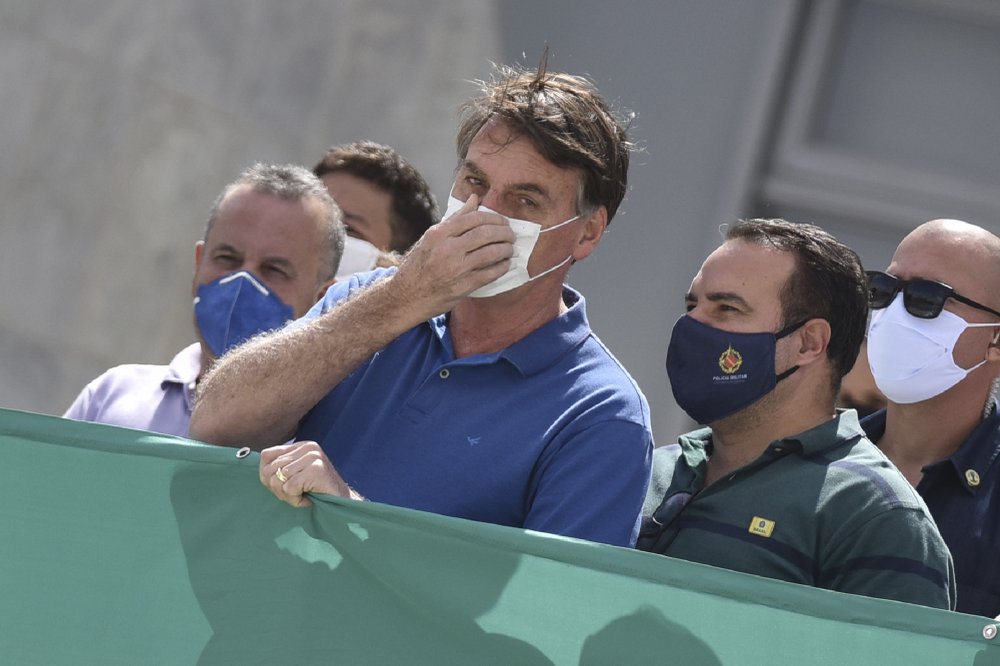 In this May 17, 2020 file photo, Brazil’s President Jair Bolsonaro, wearing a protective face mask as a precaution against the spread of the new coronavirus, joins in a protest against the Supreme Court and Brazil’s National Congress, in Brasilia, Brazil. (AP Photo/Andre Borges, File)

“Today’s action will help ensure foreign nationals who have been in Brazil do not become a source of additional infections in our country,” McEnany said.

Filipe Martins, who advises Brazilian President Jair Bolsonaro on international affairs, said the U.S. was treating Brazil as it had other populous countries and suggested the news media were overplaying Trump’s ban.

“By temporarily banning the entry of Brazilians to the U.S., the American government is following previously established quantitative parameters that naturally reach a country as populous as ours,” Martins tweeted. “There isn’t anything specifically against Brazil. Ignore the hysteria from the press.”

Bolsonaro has downplayed the coronavirus by repeatedly calling it a “little flu” and insisting that closing businesses and issuing stay-at-home recommendations will ultimately cause more hardship by wrecking the economy. Bolsonaro fired his first health minister for going against him and backing restrictions put in place by Brazil’s governors. His second minister also resigned after openly breaking with Bolsonaro over widespread prescription of the antimalarial drug chloroquine for coronavirus treatment.

Trump said in an interview broadcast in the U.S. on Sunday that he had completed a course of a related drug, hydroxychloroquine, as a line of defense against becoming infected.

Bolsonaro’s approach has mirrored that of Trump, who in the early days of the outbreak sought to downplay the severity and suggest the few cases that existed in the U.S. would “just disappear.” After agreeing to encourage Americans to practice social distancing, Trump began to say the “cure can’t be worse than the problem itself.” He has been aggressively pushing governors to allow businesses to reopen and traveling more himself.

Meanwhile, the number of cases in Brazil has continued to surge, pushing hospitals in multiple states to the brink of collapse and causing the Amazon city of Manaus to bury people in mass graves. The pace of deaths has been accelerating and, with a peak still approaching, the country has only an interim health minister. 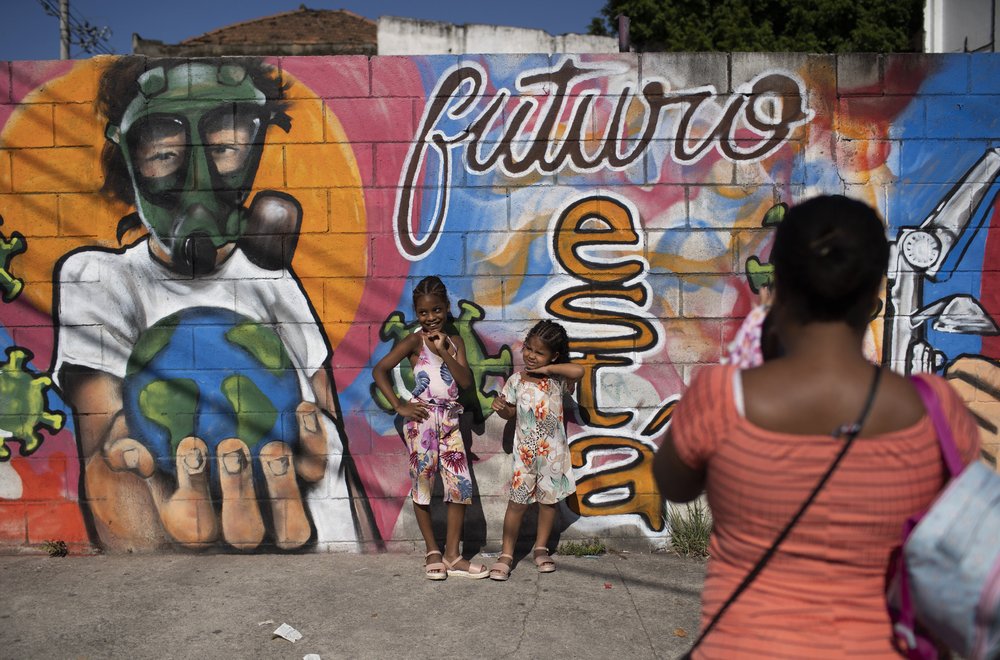 A woman takes photos of her daughters by a mural referencing the COVID-19 pandemic, painted in honor of health workers in Rio de Janeiro, Brazil, Thursday, May 21, 2020. The mural is by graffiti artist Angelo Campos, 39, who has lost two relatives to the new coronavirus. (AP Photo/Silvia Izquierdo)

Brazil has more than 360,000 cases of COVID-19, the disease caused by the coronavirus, according to health ministry data released Sunday night, meaning it trails only the U.S. in the Johns Hopkins University tally. Experts consider it a vast undercount due to insufficient testing. The ministry reported more than 22,600 deaths.

The White House said Sunday it plans to donate 1,000 ventilators to Brazil.

“We’re concerned about the people of the Southern Hemisphere and certainly the people of Brazil. They’re having a rough go of it,” he said on CBS’ “Face the Nation.” He said the travel ban would likely be temporary.

“But because of the situation in Brazil, we’re going to take every step necessary to protect the American people.” O’Brien said.

Data from Brazil’s civil aviation agency shows there has already been a sharp reduction in U.S.-bound flights from the South American country. There were more than 700 flights from Brazil to the U.S. in February of this year, with the number dropping to just 140 in April, two months later.