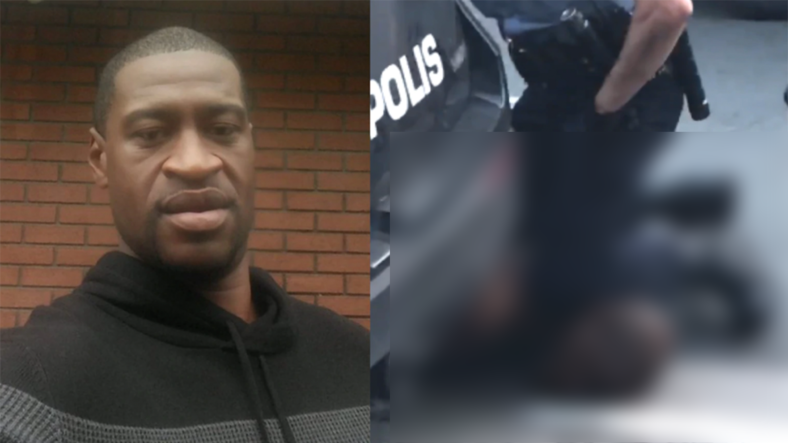 A horrifying video out in Minneapolis is going viral, after onlookers captured an interaction between police officers and a Black man resulting in a tragic civilian death.

Witnesses begged the cops to release the man, who has been identified by civil rights attorney Benjamin Crump as George Floyd, from the lethal hold that would eventually take his life, but the officers refused.

According to a statement by the Minneapolis Police Department, officers responded to a report of a “forgery in progress.” They arrived and found the suspect sitting in his car.

“He was ordered to step from his car. After he got out, he physically resisted officers,” the statement reads, “Officers were able to get the suspect into handcuffs and noted he appeared to be suffering medical distress.”

The bystander in the video, however, tells a different story.

A white officer is seen sitting with his knee on Floyd’s neck for at least eight minutes. For the first five minutes or so, he can be heard pleading with officers that he can’t breathe.

“My stomach hurts. My neck hurts. Everything hurts … (I need) water or something,” Floyd cries out.

The grown man even calls out to his mother, saying heartbreakingly, “Mama.” When his actual words stop, his agonizing moans begin.

Bystanders are heard asking, “How long are you going to keep your knee on his neck?”

A male onlooker says out loud that the officer is “enjoying that.”

“He’s a bum, Bro,” the unidentified voice asserts, “You could have put him in the car by now. He’s not resisting arrest or nothing. You’re enjoying it. Look at you. Your body language — you bum. You know that’s bogus right now.”

Repeatedly, the concerned onlookers asked for the officers to “check his pulse.” They would not. In fact, one officer seemed to be more concerned about being videotaped and making sure the witnesses were on the curb.

Five minutes into the video, Floyd appears to lose consciousness. The officer still keeps his knee on his neck for an additional three minutes until an ambulance arrives. Floyd was transported to Hennepin County Medical Center by ambulance where he died a short time later.

At the end of the video, as an ambulance drives away, a male onlooker is heard saying, “You just really killed that man, Bro.”

The video was posted to Facebook by a woman named Darnella Frazier who captioned the video, “They killed him right in front of cup foods over south on 38th and Chicago!! No type of sympathy #POLICEBRUTALITY”

MPD states that body cameras were on during the incident and that The Minnesota Bureau of Criminal Apprehension has been called in to investigate. In an update, MPD also announced that the FBI will also be a part of the investigation.