US layoffs climb to 41 million, despite business reopenings

The figures underscored the continuing damage to businesses and livelihoods from the outbreak that has now killed at least 100,000 people in the U.S.

WASHINGTON (AP) — An estimated 2.1 million Americans applied for unemployment benefits last week despite the gradual reopening of businesses around the country, bringing the running total since the coronavirus shutdowns took hold in mid-March to about 41 million, the government said Thursday.

The figures underscored the continuing damage to businesses and livelihoods from the outbreak that has now killed at least 100,000 people in the U.S., more than the number of Americans lost in the Vietnam and Korean wars combined, and more than 33 times the death toll on 9/11.

The U.S. unemployment rate was 14.7% in April, the highest since the Great Depression, and many economists expect it will near 20% in May.

First-time applications for unemployment, though still extraordinarily high, have fallen for eight straight weeks, and states are gradually letting stores, restaurants, salons, gyms and other businesses reopen. But other employers are still laying off workers in the face of a deep recession.

The Labor Department included a positive sign: The number of people now receiving benefits fell for the first time since the outbreak intensified in mid-March, from 25 million to 21 million. That suggests companies are starting to rehire and could mean that total job losses will peak in May. 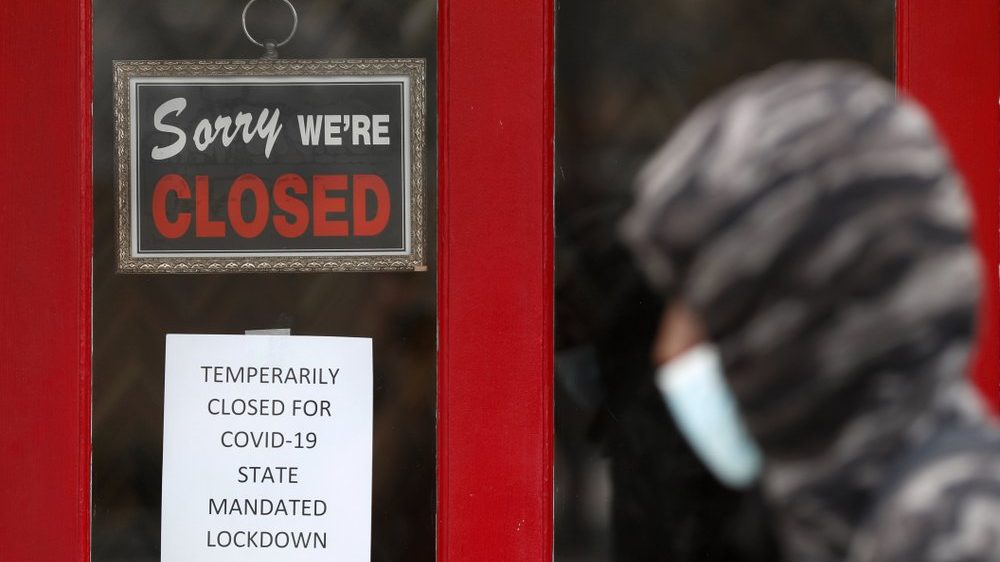 In this May 7, 2020 file photo, a pedestrian walks by The Framing Gallery, closed due to the COVID-19 pandemic, in Grosse Pointe, Mich. (AP Photo/Paul Sancya, File)

Elsewhere around the world, India saw another record daily jump in coronavirus cases, while Russia reported a steady increase in its caseload, even as the city of Moscow and provinces across the vast country moved to ease restrictions in sync with the Kremlin’s political agenda.

India, home to more than 1.3 billion people, reported more than 6,500 new infections, bringing the nation’s total to over 158,000. The spike comes as the nation’s 2-month-old lockdown is set to end Sunday. The country has recorded over 4,500 deaths.

Prime Minister Narendra Modi’s government is preparing guidelines to be issued this weekend, possibly extending the lockdown in hard-hit areas. Earlier this month, the country allowed the reopening of shops and factories and the resumption of some train service and domestic flights.

Meanwhile, India’s top court ordered state authorities to provide free train rides and proper food and water to hundreds of thousands of poor migrant workers returning to their villages in the blazing heat after being thrown out of work in the cities and towns.

TV images have shown desperate and hungry migrants looting food carts at train stations, and at least four people have died on the trains this week as daytime temperatures climbed to 113 degrees Fahrenheit (45 Celsius).

South Korea on Thursday reported its biggest jump in coronavirus cases in more than 50 days, a setback that could erase some of the hard-won gains that have made it a model for the rest of the world.

In Russia, President Vladimir Putin announced earlier this week that the country’s postponed Victory Day military parade marking the 75th anniversary of the Nazi defeat in World War II will be held June 24, declaring the nation has passed the peak of the outbreak.

Russian media reported that the Kremlin now also plans to go ahead with another high-priority item on Putin’s political agenda — a referendum on constitutional amendments that could allow him to remain in power through 2036. He postponed the vote in April because of the outbreak.

The government reported more than 8,300 new infections Thursday, down from more than 11,000 earlier this month. The total number of infections topped 379,000, the world’s third-largest caseload behind that of the United States and Brazil.

Russian officials reported 174 new deaths, for a total of almost 4,150.

Some Kremlin critics allege that the relatively low mortality rate reflects manipulation by authorities trying to set a positive environment for the parade and the constitutional vote. Russian officials have angrily rejected the allegations. 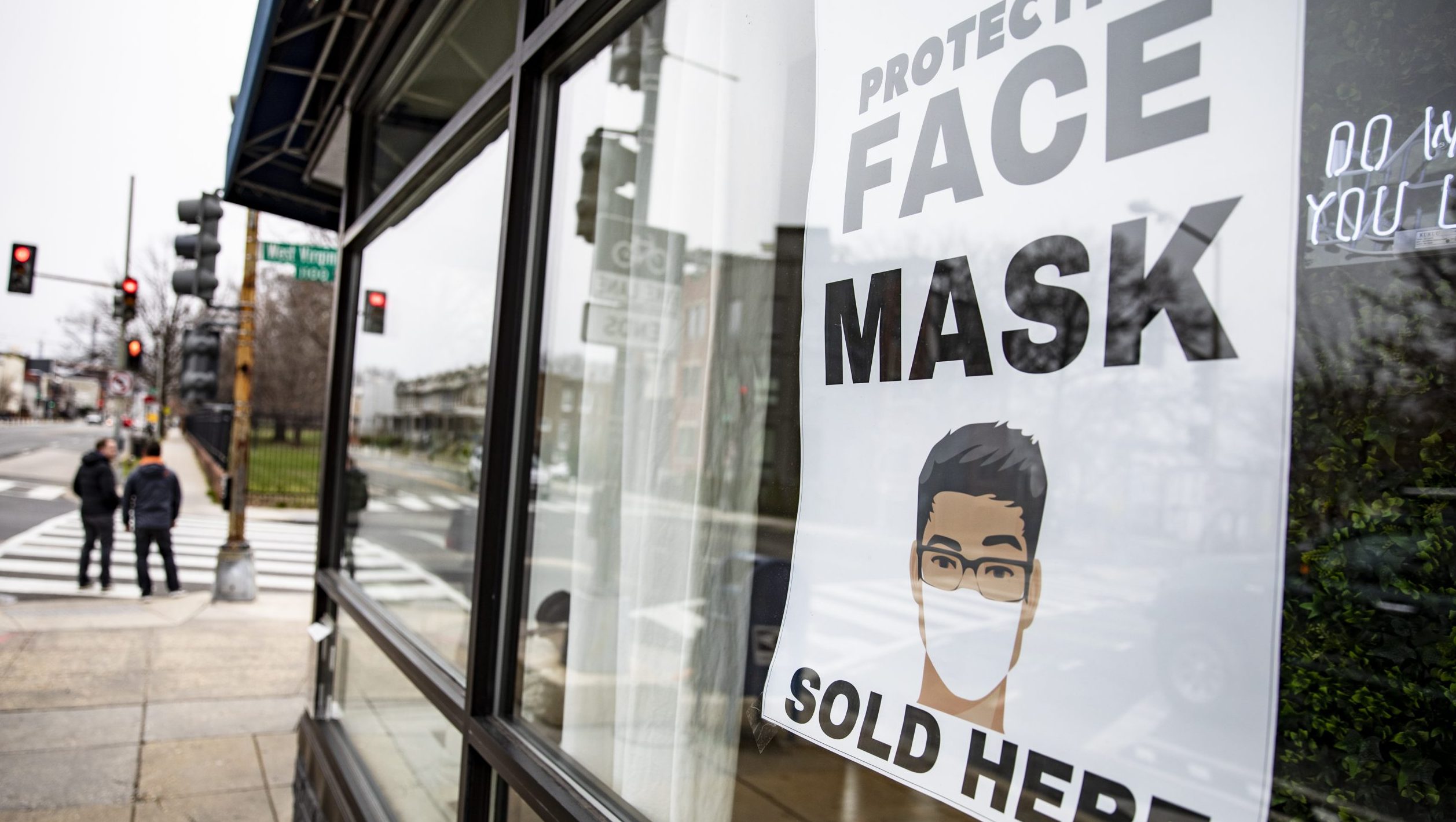 With the growing spread of the coronavirus around the world it is becoming harder and harder to find protective equipment and hand sanitizer around the country, especially the N95 protective face mask which Patrom is selling for $30, three times its regular cost. (Photo by Samuel Corum/Getty Images)

Moscow, which accounted for about half of all infections, ordered an easing of the tight lockdown in place since late March, saying that non-food stores, dry cleaners and repair shops can reopen on Monday. The mayor also announced that residents will be allowed to walk in the parks with some restrictions and engage in sports in the mornings.

Across the vast country, numerous provinces already have eased the lockdowns.

In the U.S., Las Vegas casinos and Walt Disney World have made plans to reopen, and crowds of unmasked Americans are expected to swarm beaches over the summer months. Public health officials predict a resurgence by fall.

Despite the risks, the pressure for easing restrictions has risen across the globe as the economic pain has worsened.

French unemployment claims jumped 22% in April, as 843,000 more people sought work and the virus lockdown prevented companies from hiring. The jobless ranks in France don’t include 8 million people who received paycheck subsidies from the government.

Worldwide, the virus has infected more than 5.7 million people and killed over 355,000, with the U.S. having the most confirmed cases and deaths, according to a tally by Johns Hopkins University. Europe has recorded about 170,000 deaths.

The true death toll from the virus is widely believed to be significantly higher, with experts saying many victims died without ever being tested.

Some nations are seeing improvements. New cases in Spain and Italy have fallen steadily for two months. China reported just two new cases on Thursday, both from abroad. New Zealand has reported no new cases for six days and has just eight active cases remaining.

Isachenkov reported from Moscow. Associated Press reporters from around the world contributed to this report.