Waltz decries ‘chaos,’ claiming only 20% of Minnesotans were taking part in these demonstrations. The rest, he said, were provocateurs from out of state.

Governor Tim Walz of Minnesota declared that the protests over George Floyd’s murder were no longer a matter of righteous fury but were now being driven by “domestic terrorists” and was now enlisting the National Guard.

Walz, a Democrat, made the remarks during a Saturday morning press conference. He also called upon for the state’s National Guard and the mobilization of its full force of which there may be 13,000 guardsmen serving and the first time they’ve been called upon since World War II. He felt the increased presence of law enforcement was necessary to combat agitators whom he now believes have descended upon the area. 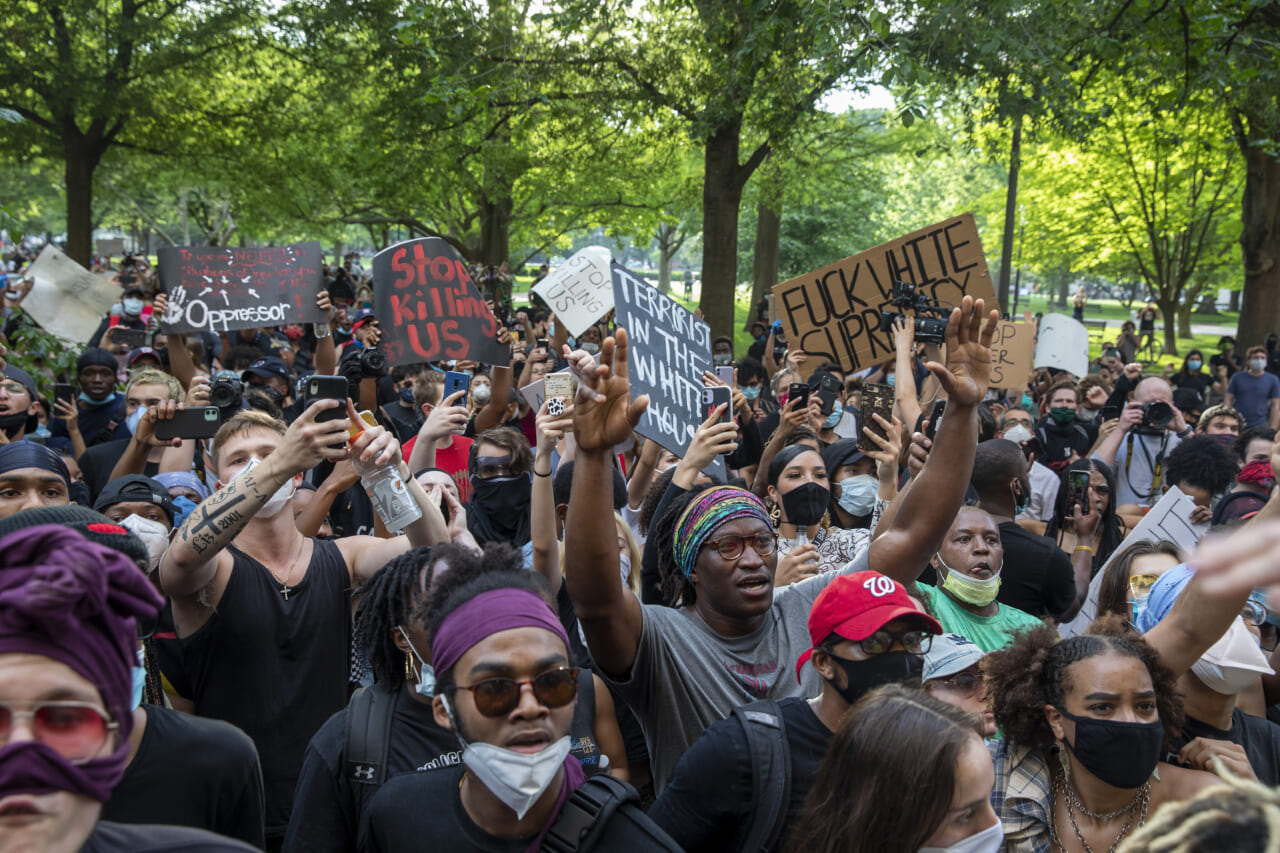 Demonstrators hold a protest in response to the police killing of George Floyd in Lafayette Square Park on May 29, 2020 in Washington, DC. (Warning: Image contains profanity) (Photo by Tasos Katopodis/Getty Images)

“Last night is a mockery of pretending that this is about George Floyd’s death, or inequities, or historical traumas to our communities of color,” Walz said.

Walz maintained that the protests that have erupted in Minneapolis and across the nation in response to Floyd’s death, who died Monday after a police officer placed a knee on his neck, had been taken advantage of. He was of the opinion that chaos had now taken over and that only 20% of Minnesotans were taking part in these demonstrations and the rest, 80%, were provocateurs coming in from out of state.

Minnesota Gov. Tim Walz: “Let's be very clear. The situation in Minneapolis is no longer in any way about the murder of George Floyd. It is about attacking civil society, instilling fear and disrupting our great cities.” https://t.co/a9S9a49kht pic.twitter.com/ZnTEXcmeeu

“The situation in Minneapolis is no longer in any way about the murder of George Floyd, it is about attacking civil society, instilling fear, and disrupting our great cities,” he said.

“As you saw this expand across the United States, and you start to see whether it be domestic terrorism, whether it be ideological extremists to fan the group, or whether it be international destabilization of how our country works.”

Walz said that the priority was now the “protection of citizens and property is our top priority, and maintaining and restoring civil order on the streets.” 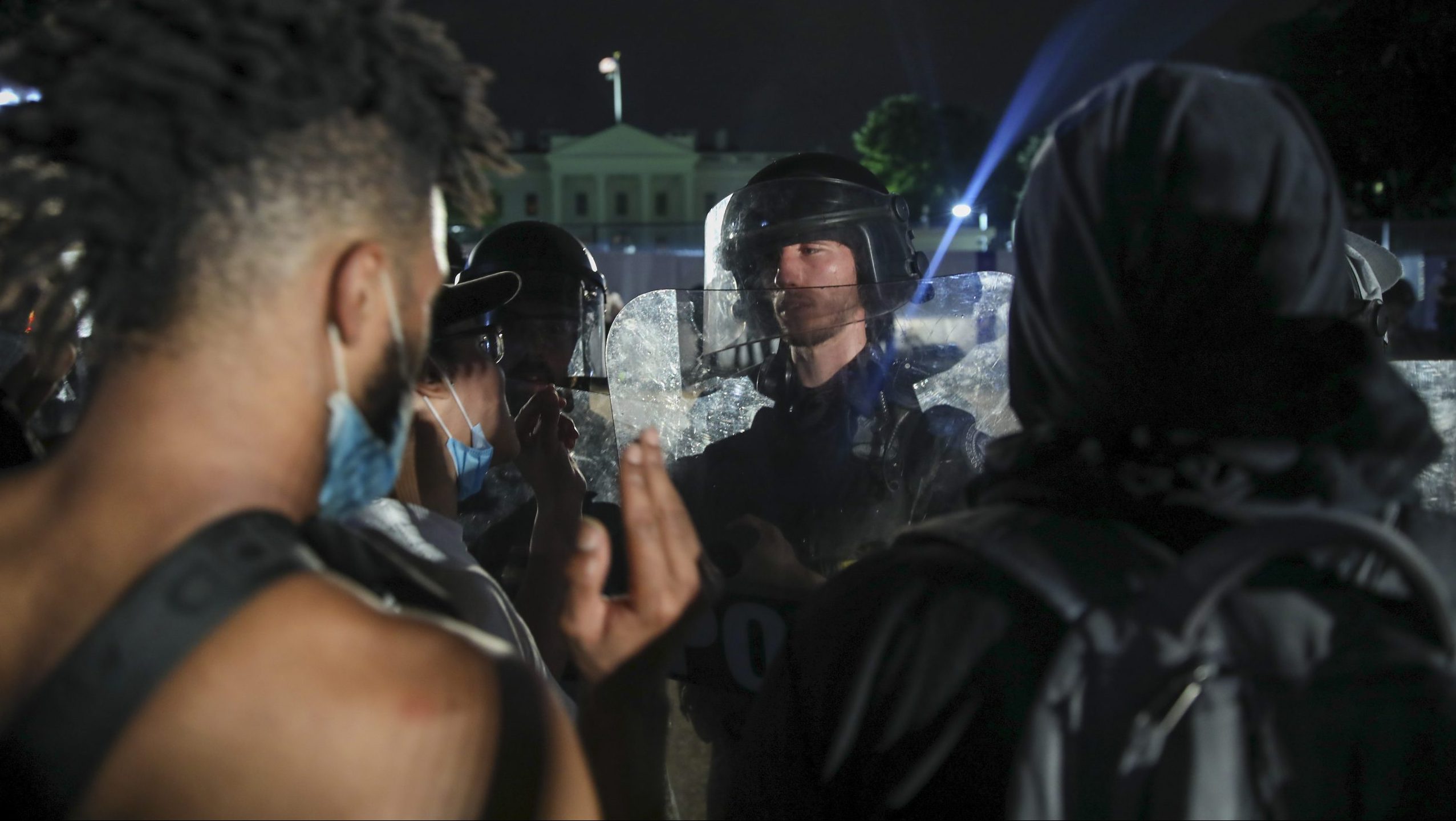 Demonstrators hold a protest in response to the police killing of George Floyd in Lafayette Square Park near the White House on May 29, 2020 in Washington, DC. (Photo by Tasos Katopodis/Getty Images).

The comments were an expansion of his suggestion Friday evening that white supremacists and cartels were infiltrating the Black Lives Matter protests and purposefully causing conflict. He said the extremists were seizing on this moment to advance their causes.

“It gets worse than that,” Walz said. “The cartels, who are wondering if there was a break in their drug transmissions, are trying to take advantage of the chaos. That’s why this situation is on a federal level.”

He was arrested Friday for third-degree murder and manslaughter for the death of Floyd and taken into custody by the Bureau of Criminal Apprehension. However, the arrest did not subside the protests as the violence has continued and footage from the various protests has shown that there may be heft to Walz’s claims that there are those exploiting the tragedy.

A viral video of protestor Selena Adera shows her pleading with those breaking windows, destroying property, and inciting violence. She can be heard yelling “stop yelling” to those who are causing the mayhem. In a Twitter thread, she said that they were accused of wrongdoing when they tried to stop them.

2/Across the country, white privileged kids were caught on camera starting violent riot behavior in the midst of organized Black protests.

When we tried to stop them, their buds falsely accused us of assault, stoking further police violence against us.pic.twitter.com/zWH64DUc2U

“After failing to appropriate the Black People’s Party, entitled white kids appropriated our fight yesterday, and made it dirty. Then they left us to deal with the police violence they stoked,” the caption read.