NYPD officer shoves protester, 20, to the ground who then has seizure

From her hospital bed, Dounya Zayer gave a video diary of the account. 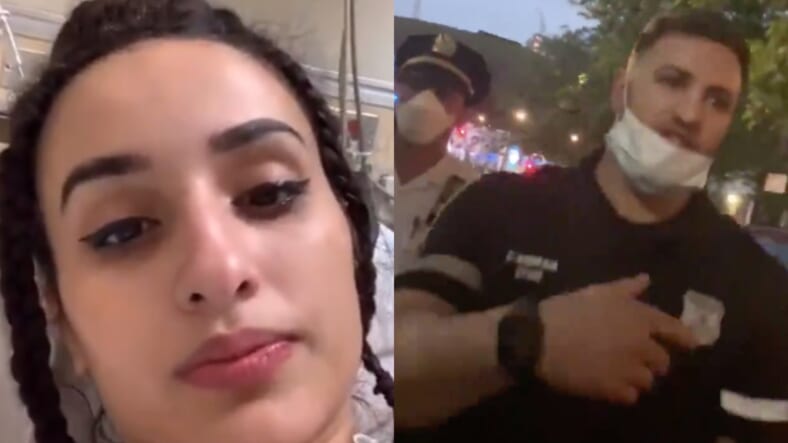 Multiple videos captured a young woman of color being violently shoved by an officer from the New York Police Department as she protested the death of George Floyd.

On Friday, Dounya Zayer joined a Brooklyn crowd to express her outrage peaceably but was met by an aggressive officer who not only smacked her phone and called her a “b*tch,” but pushed her to the ground. It caused her to have a seizure.

From her hospital bed, Zayer gave a video diary of the account.

First, she shared a video of her recording the march. The officer is walking toward her and barks for her to get out of the way. When she asks “Why?” the phone goes dead. He hit it out of her hand.

This is the officer. He threw my phone before throwing me. As you can see I was already backing up. All I asked was why. pic.twitter.com/8mct5GrztV

Others captured what happens next.

A woman named Whitney Hu posted to Twitter her angle of the assault. Her post captioned, “The cop pushed her so hard at Barclays & she flung back. She is tiny.”

Update: Got her permission with a fuck yeah. The cop pushed her so hard at Barclays & she flung back. She is tiny. Now she’s in the ER after a serious seizure. I’m waiting for updates but have to wait outside because of COVID-19. Please keep my protest sister in your thoughts. pic.twitter.com/MqV0QJ0D8h

Hu accompanied Zayer to the hospital but could not go in with her through the emergency room because of the restrictions set up to protect people from the deadly and highly infectious COVID-19 virus.

Another angle was shot by Newsweek reporter Jason Lemon, who was present and heard her being called a “stupid f*cking b*tch” after the assault.

I fixed the video for you, and also slowed it down on replay. pic.twitter.com/TTRUSiOFY2

According to Zayer, some people were disorderly.

“[I want] tell you what happened right before the video started,” she reflected. “We were all in a crowd peacefully protesting in front of a crowd of police officers.”

She admits that one of the protestors threw a bottle which caused the officers to rush in their direction.

She continues, “So we were all starting to get pushed back by a different officer before what you saw.”

“When I [initially] got pushed back, I realized what was going on because everyone was getting pushed back. I wasn’t the only one. So, I looked down and started recording. I looked back up and that is when the video that posted starts.”

“That’s when the guy pushed my phone. But as you can see, I was already running backward. I wasn’t trying to get in his face. I asked him ‘why’ because we were peacefully protesting and we were not the ones to throw the bottle.”

Both New York City’s mayor, Bill de Blasio, and New York State’s governor, Andrew Cuomo, are checking in with the police department to identify the officer, gather more information, and a police review.

“Review all the facts. Review the police procedures. Review the crowd’s actions and give us an independent review,” Cuomo said, wanting Attorney General Letitia James to do so within 30 days.

However, Black and Woke Twitter seems to have done their own digging.

According to several sources, the officer who pushed the 20-year-old woman, who will be voting in her first presidential election this November, is officer Vincent J. D’Andraia from the 73rd Precinct. His commander is named Craig Edelman, who accompanied him.

Activist Shaun King mentions that he is said to have a history of brutalizing “Black people all over Brownsville.”

Multiple police officers from inside the NYPD told me that this officer who assaulted the young woman is Vincent J. D’Andraia is the 73rd Precinct.

They said he brutalizes Black people all over Brownsville.

And so does NYPD Commander Craig Eldelman, who is in the white shirt. pic.twitter.com/z2wJLq8Y3T

Zayer says that she is doing better, but still visibly angry. From her recovery room, she wants to clarify any misinformation.

“This was me, and I want to make one thing clear to all the people that are commenting lies below this video. I did NOT spit in this officer’s face. I was wearing a face mask. He told me to get out of the street and then immediately threw me out of the way,” she posted.