Minnesota protester calls out looters on CNN: ‘Something’s wrong with you’ 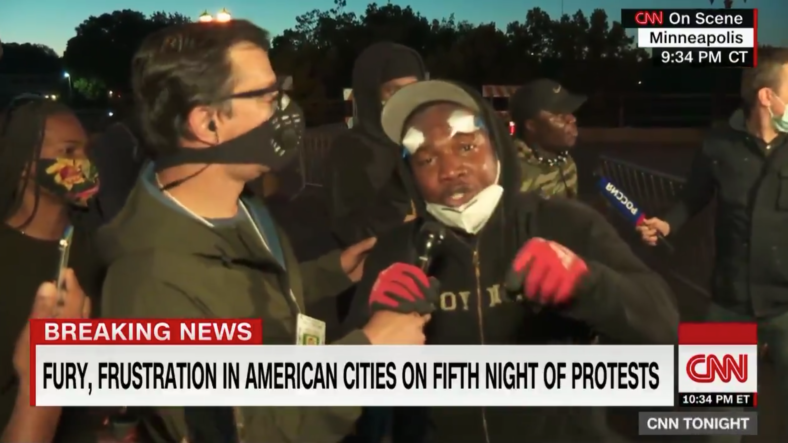 Minneapolis, where 46-year-old George Floyd died at the hands of city police on Memorial Day, is the epicenter of police brutality protests that have sparked nationwide. While some protests at times have devolved into riots, one protester believes the individuals looting stores aren’t being genuine.

Patrick Smith, a 24-year-old Minnesota man out protesting near the state capital Saturday night, told CNN had some words for the people who did so.

“If you really feel like you have to take an opportunity, like if you’re going to be an opportunistic, something’s wrong with you,” Smith told a reporter with the station.

Smith, a Liberian immigrant, feels that much of the property damage is being started by people who are trying to take advantage of the protests for personal gain and to appear to be cutting corners.

Minneapolis protester: “We're trying to … stand up for the basic rights of humanity. … I want to be able to go in a white neighborhood and feel safe. I want to be able, when a cop is driving behind me, I don't have to clench and be tense, OK? I want to be able just to be free” pic.twitter.com/EKjrij326V

The sentiments of Smith’s statement echo the feelings of many Black Americans who are outraged at police brutality and racism that led to Floyd’s death.

“We do not want to go through this anymore,” Smith said in the clip. “I want to be able to go into a white neighborhood and feel safe. I want to be able, when a cop is driving behind me, I don’t have to clinch and be tense. … I want to be able just to be free and not have to think about every step I take, ’cause at the end of the day being Black is a crime.

“At the end of the day, being born Black is a crime to them, and I don’t understand why ’cause we’re all humans.”

Smith’s comments echo that of Minnesota Gov. Tim Walz and other elected officials who have decried violent demonstrations. The city of Minneapolis was subjected to an 8 p.m. curfew and more than a dozen major cities across the country were also placed under overnight restrictions in efforts to stop rioting.

Police, state troopers and National Guard members swept Minneapolis after the curfew went into effect to stop demonstrations. More than 4,000 National Guard troops have been deployed to the city and the number could reportedly rise to almost 11,000.

“The situation in Minneapolis is no longer in any way about the murder of George Floyd,” Walz said. “It is about attacking civil society, instilling fear and disrupting our great cities.”