World alarmed by violence in US; thousands march in London

Chanting 'No justice! No peace!' and waving placards with the words 'How many more,' the protesters ignored U.K. government rules banning crowds because of the pandemic. 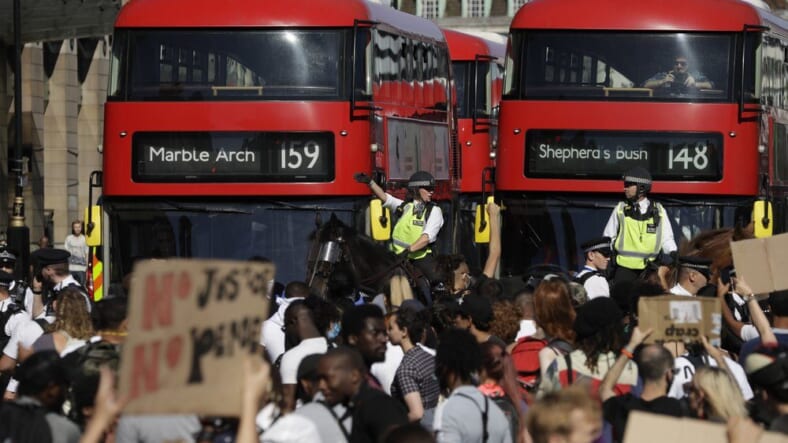 Police officers on horseback stand next to demonstrators blocking the road outside the Houses of Parliament in central London on Sunday, May 31, 2020, to protest against the recent killing of George Floyd in Minneapolis, USA. US Police officers have been detained in connection with the death of George Floyd that has led to protests in many countries and across the U.S.(AP Photo/Matt Dunham)

LONDON (AP) — Nations around the world have watched in horror at the civil unrest in the United States following the death of George Floyd, a black man who died after a white police officer pressed his knee on his neck until he stopped breathing.

Racism-tinged events no longer startle even America’s closest allies, though many have watched coverage of the often-violent protests with growing unease. Burning cars and riot police in the U.S. featured on newspaper front pages around the globe Sunday — bumping news of the COVID-19 pandemic to second-tier status in some places.

Floyd’s death on May 25 in Minneapolis was the latest in a series of deaths of black men and women at the hands of police in the U.S.

Thousands gathered in central London on Sunday to offer support for American demonstrators. Chanting “No justice! No peace!” and waving placards with the words “How many more?” at Trafalgar Square, the protesters ignored U.K. government rules banning crowds because of the pandemic. Police didn’t stop them.

Demonstrators then marched to the U.S. Embassy, where a long line of officers surrounded the building. Several hundred milled around in the street and waved placards.

Protesters in Denmark also converged on the U.S. Embassy on Sunday. Participants carried placards with messages such as “Stop Killing Black People.” 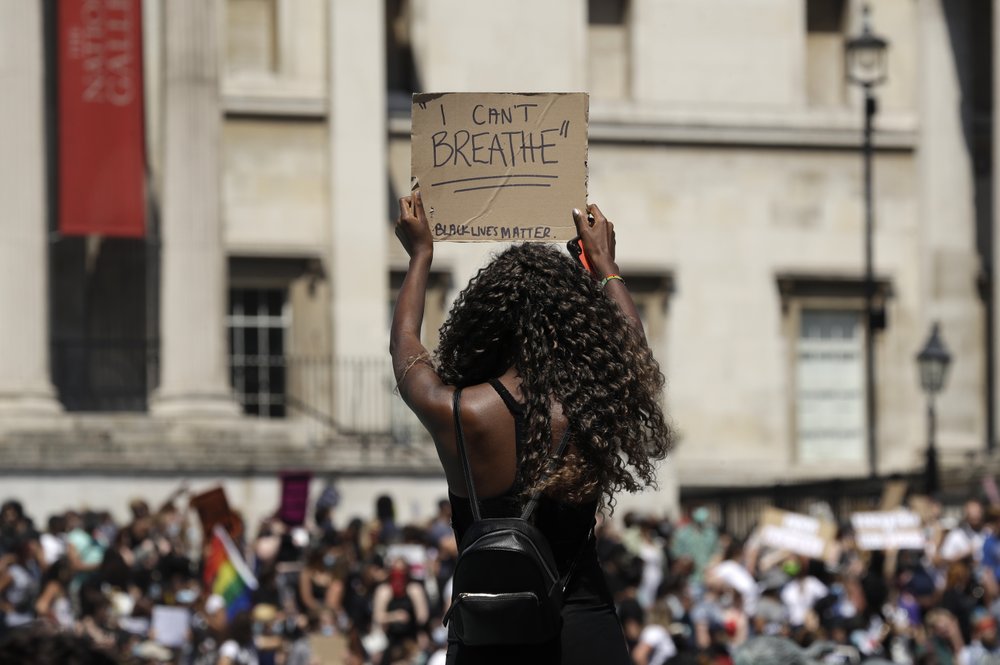 A woman holds up a banner as people gather in Trafalgar Square in central London on Sunday, May 31, 2020 to protest against the recent killing of George Floyd by police officers in Minneapolis that has led to protests across the US. (AP Photo/Matt Dunham)

The U.S. Embassy in Berlin was the scene of protests on Saturday under the motto: “Justice for George Floyd.” Several hundred more people took to the streets Sunday in the capital’s Kreuzberg area, carrying signs with slogans like “Silence is Violence,” “Hold Cops Accountable,” and “Who Do You Call When Police Murder?” No incidents were reported.

Germany’s top-selling Bild newspaper on Sunday carried the sensational headline “This killer-cop set America ablaze” with an arrow pointing to a photo of now-fired police officer Derek Chauvin, who has been charged with third-degree murder in Floyd’s death, with his knee on Floyd’s neck. The newspaper’s story reported “scenes like out of a civil war.”

In Italy, the Corriere della Sera newspaper’s senior U.S. correspondent Massimo Gaggi wrote that the reaction to Floyd’s killing was “different” than previous cases of black Americans killed by police and the ensuring violence.

“There are exasperated black movements that no longer preach nonviolent resistance,” Gaggi wrote, noting the Minnesota governor’s warning that “anarchist and white supremacy groups are trying to fuel the chaos.″

In countries with authoritarian governments, state-controlled media have been highlighting the chaos and violence of the U.S. demonstrations, in part to undermine American officials’ criticism of their own nations.

In China, the protests are being viewed through the prism of U.S. government criticism of China’s crackdown on anti-government protests in Hong Kong.

Hu Xijin, the editor of the state-owned Global Times newspaper, tweeted that U.S. officials can now see protests out their own windows: “I want to ask Speaker Pelosi and Secretary Pompeo: Should Beijing support protests in the U.S., like you glorified rioters in Hong Kong?”

Hua Chunying, a Chinese Foreign ministry spokeswoman, pointed out America’s racial unrest by tweeting “I can’t breathe,” which Floyd said before his death.

In Iran, which has violently put down nationwide demonstrations by killing hundreds, arresting thousands and disrupting internet access to the outside world, state television has repeatedly aired images of the U.S. unrest. One TV anchor discussed “a horrible scene from New York, where police attacked protesters.” Another state TV message accused U.S. police agencies in Washington of “setting fire to cars and attacking protesters,” without offering any evidence. 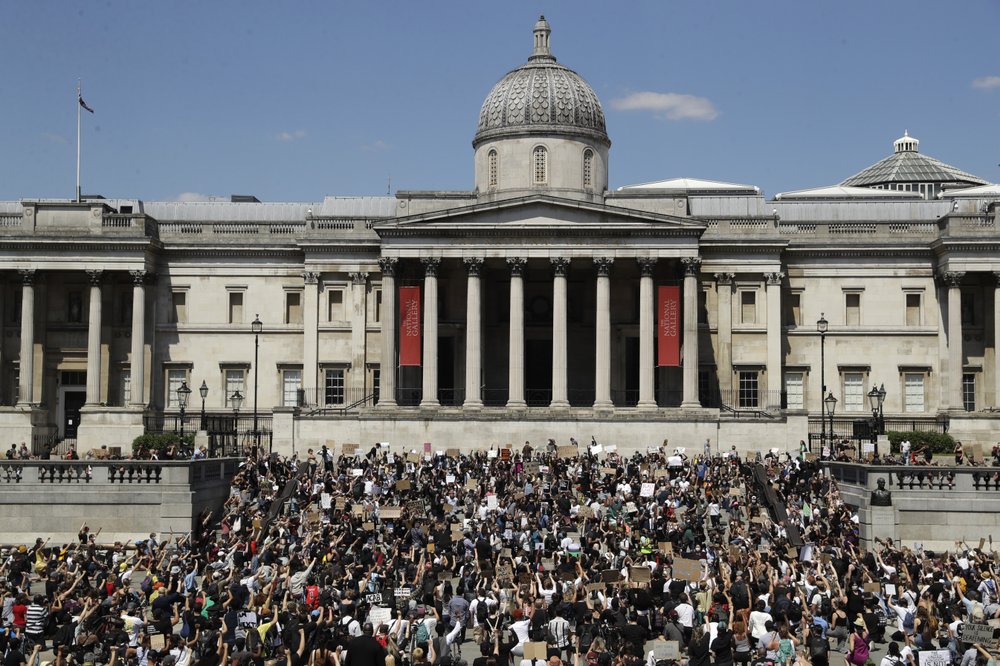 People, some of them kneeling gather in Trafalgar Square in central London on Sunday, May 31, 2020 to protest against the recent killing of George Floyd by police officers in Minneapolis that has led to protests across the US. (AP Photo/Matt Dunham)

Russia accused the United States of “systemic problems in the human rights sphere.″ It denounced Floyd’s death as the latest in a series of police violence cases against African Americans.

“This incident is far from the first in a series of lawless conduct and unjustified violence from U.S. law enforcement,” the Russian Foreign Ministry said in a statement. “American police commit such high-profile crimes all too often.’’

There also have been expressions of solidarity with the demonstrators.

Over the weekend, Lebanese anti-government protesters flooded social media with tweets sympathetic to U.S. protesters, using the hashtag #Americarevolts. That’s a play on the slogan for Lebanon’s protest movement — Lebanon revolts — which erupted on Oct. 17 last year. Within 24 hours, the hashtag #Americanrevolts became the No. 1 trending tag in Lebanon.

In another expression of solidarity with American protesters, about 150 people marched through central Jerusalem on Saturday to protest the shooting death by Israeli police of an unarmed, autistic Palestinian man earlier in the day. Israeli police mistakenly suspected that the man, Iyad Halak, was carrying a weapon. When he failed to obey orders to stop, officers opened fire.