Kendrick Sampson on ‘traumatic’ clash with LAPD, using his voice in Hollywood

The 'Insecure' star says that it's his mission to advocate for the Black community, no matter the cost.

The Insecure star, 32, is nursing several rubber bullet wounds and tending to bruises and cuts from being beaten by a baton, when he hops on the phone with theGrio on Sunday. Even with all of his injuries, he is only focused on one thing: defunding the police.

Sampson is one of the few thousand people who took to the streets of Los Angeles on Saturday, May 29, to protest against police brutality amid widespread civil unrest. The actor’s non-profit initiative, Build Power, partnered with the Black Lives Matter Los Angeles chapter to organize a peaceful protest in Pan Pacific Park in the Fairfax district of L.A.—a moment that Sampson calls “a beautiful, powerful experience.”

“We brought people out to the park, in Pan Pacific Park, we honored on the land,” he says. “We honored those who have been murdered by police. The many that had been murdered by police—George Floyd brought us there that day, but we also had Tony McDade, and Kenneth Ross Jr., Breonna Taylor. …We poured out libations and we did so many beautiful things. We had an amazing song by Amber Riley, she’s sang ‘Freedom’ by Beyoncé—you know, my H-town people.” 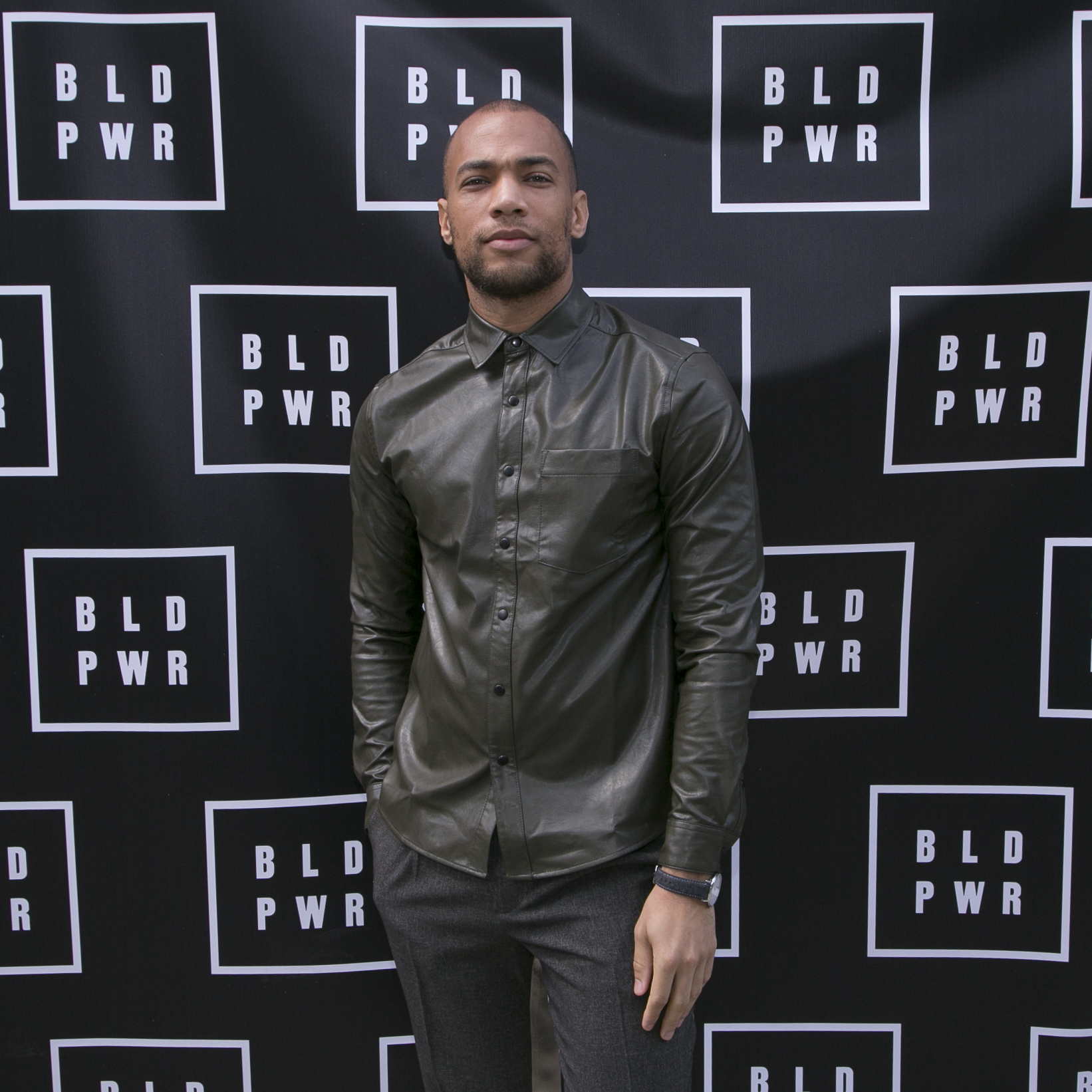 The energy of the gathering was so overwhelming that organizers decided to continue on, marching down Third Street to the intersection of Third and Fairfax Avenue. There, they continued to speak about tangible solutions to combat the inequality facing the Black community.

“We talked about mental healthcare in our community, education and after-school programs, and healing in our communities and what that infrastructure looks like. We talked about the organizations that people could join to do the work every day,” Sampson says. “Then we ended with a Assata Shakur chant in the middle of that intersection.”

The event was over and an exhausted Sampson was ready to “go home.” The Los Angeles Police Department, however, had different plans, the actor shared.

“I looked for my staff and my staff had disappeared,” he explains. “Lacey, my associate director, and Mario, my assistant, and I couldn’t find them. And as I was looking for them, I realized just about half a block in…that the police had set up, you know, cop cars all in the streets and they had batons in their hands and they were aggressive. They looked like they were military ready to attack.”

Sampson began to utilize his “training defending black lives” and began recording the encounter in hopes that it would document the truth. The How To Get Away With Murder alum and his assistant were then confronted by LAPD officers, who began shooting rubber bullets at them and hitting them with batons, an encounter that was captured live on CNN.

“I was thinking we have to get the truth out,” he says about what was going through his mind at that time. “We have to get the truth out and then probably halfway in, my staff showed up. I guess because they saw on my IG [Instagram] what was happening and they—and that makes me a little bit emotional, they actually came to my aide, even though they were swinging these batons at me, hitting me and shooting me with rubber bullets—they came to stand with me.”

I cut this together from both of our IG live stream POVs. Keep in mind, I don’t know this man AT ALL. I want to make this really clear. He was targeted because he called out the undercover cops in the LAPD. He said that the people throwing things (water bottles and such) at the police are not protesters, they are undercover cops (agent provocateurs/infiltrators) who are agitators and trying to give justification to the brutality. He said over the bullhorn to turn your camera’s on the people throwing stuff and call them out because they are LAPD!! VERY shortly after, he was tackled and the people around him were viciously brutalized as you can see in this video to ensure no interference even though no one was interfering. Now to be clear, I don’t EVER advocate for turning your camera on a protestor. I am not demonizing or denouncing the tactics we use to dismantle police/slave catching or #DefundPolice. We have to be creative and relentless. I am not demonizing or denouncing the way we get to express our rage, grief, mourning or trauma in this moment. And I’m talking about Black people. Non Black people – especially white folks – know that what you do at these protests directly affects the lives of Black protesters as you scream #BlackLivesMatter BUT apparently in this moment – HE KNEW SOMETHING or he FELT something. And apparently he happened to be right. I have some videos I’m sorting through now. And he was targeted for it. #DefundthePolice #DefendBlackLives #ProsecuteKillerCops

He continues, “Then I felt even more protective, you know? I was thinking about defending folks that were being brutalized by police, that they were hurting. Like, they were bringing their batons all the way up in the sky, and cracking down on folks for nothing, unprovoked, and shooting people with rubber bullets. That can cause life-long damage, brain damage. They were were aiming at people’s faces, and head and chest. Sometimes they would ricochet off the ground, most of the time, but then they would aim for certain folks and that’s what they did to me.”

Sampson, who speculates that his livestream airing on CNN may have been the cause of the targeting, walked away with seven rubber bullet wounds. His assistant was so severely injured by the encounter that he had to get stitches because “you could see the bone,” the Houston native explained.

“It is a scary circumstance,” he says about the confrontation. “You don’t know what’s going to happen. You have adrenaline going, fight or flight, and fortunately, I was blessed enough to make sure that I was fighting. You know, I don’t condemn anybody who does anything different necessarily. I want to be very clear that I don’t condemn anybody else’s type of protest, that the only reason I continue to say that it was peaceful is to highlight the brutality of these cops. But I don’t necessarily advocate that it should have been peaceful with the violence that they were shown.”

He adds, “It was incredibly traumatic for a lot of folks, but that’s what was going through my head, I have to get the truth out there. I have to keep filming. I have to get these officers faces and names out there. …I have to defend the folks on the frontline and utilize whatever privilege I have to make sure that liberation is happening, and that we get our demands out there: defund the police and prosecute killer cops.”

In an industry where people are terrified to use their voice or so engulfed in privilege that they don’t see injustice, Sampson has been a vocal advocate for change. The actor pays little mind to his brand or the effects that advocacy could have on his Hollywood career.

Instead, he choses to fight and use his platform, motivated by the ones he loves. 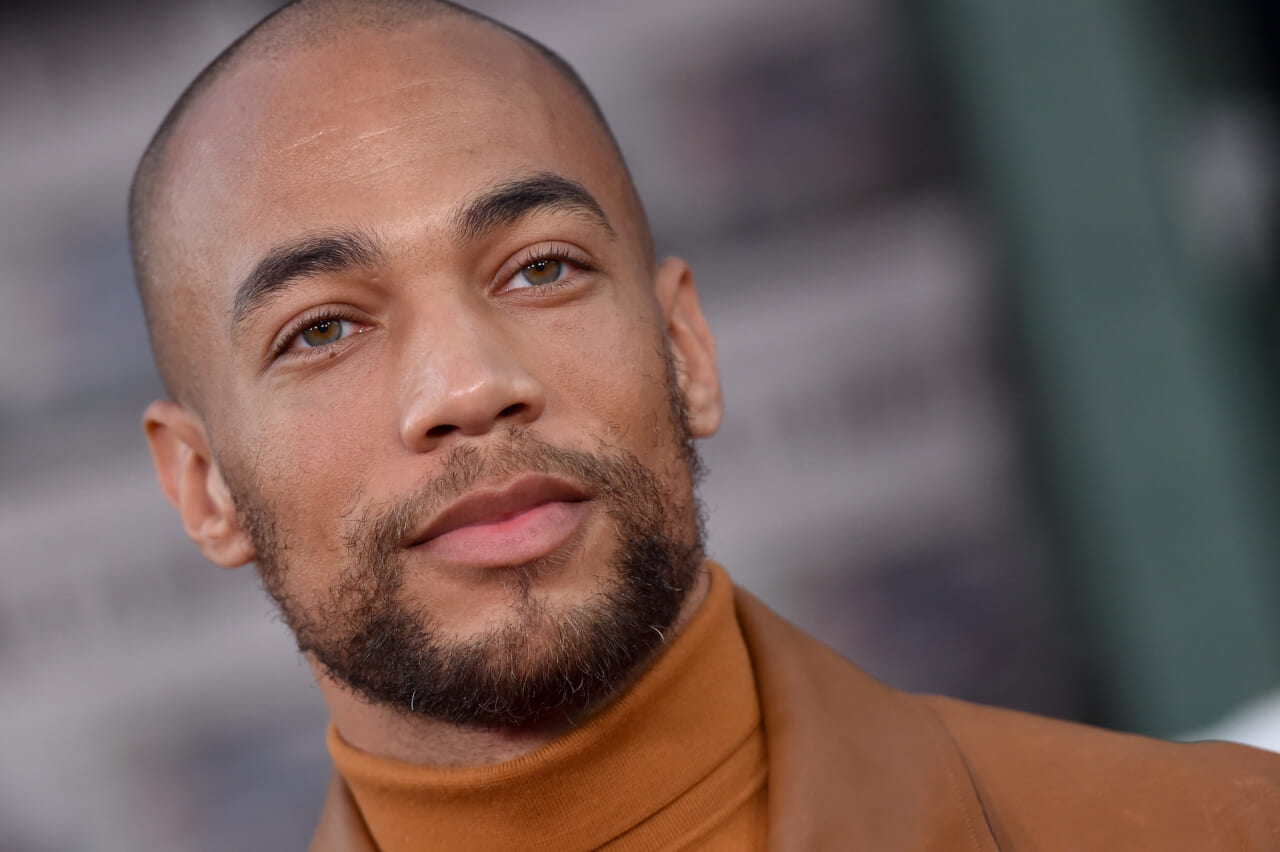 Kendrick Sampson attends the Premiere of Netflix’s “The Irishman” at TCL Chinese Theatre on October 24, 2019 in Hollywood, California. (Photo by Axelle/Bauer-Griffin/FilmMagic)

“I have 21 nephews and nieces,” he explains. “I picture their faces all the time, because I’ll be damned if I fight for our communities, and one of them loses their lives to police violence. If y’all think I’m angry now. If y’all think that I am militant or whatever now, you haven’t seen the extent of what actions I will take in order to defend those that I love, especially when we’re talking about children.”

Sampson references the funding of police departments nationwide as one of the major issues. That money, he argues, could be used for a greater cause: to uplift the Black community through policy and resources.

“The police are the largest gang in this country. They are dangerous. They have lobbying power, money. We invest billions of our tax dollars, billions every year. That money could be used to heal our communities and we can have true safety, which is not police,” Sampson says. “True safety is housing, healthcare, jobs and education. …Making sure everybody has a quality education, after-school programs, and that our kids are safe. They’re not safe with the police terror that goes on in our schools that is targeting Black and Brown kids.”

He concludes, “I’m not calling myself a leader by any means. But I’m saying that I’m not gonna put my face and my name out there—specifically targeting officers that brutalized me and calling for defunding for police—unless I know it is the solution. And that it can bring about a better world for those that I love and our community, and truly liberate our community. I know that. I know it. And I’m putting myself at risk for that. …I do not care about support for me. …I don’t care about it. I don’t need it nearly as much as I need us to have true liberation.”