OPINION: 'The displays of care and love do not absolve police departments for decades of life-taking racist sins,' say writers Stacey Patton and David J. Leonard. 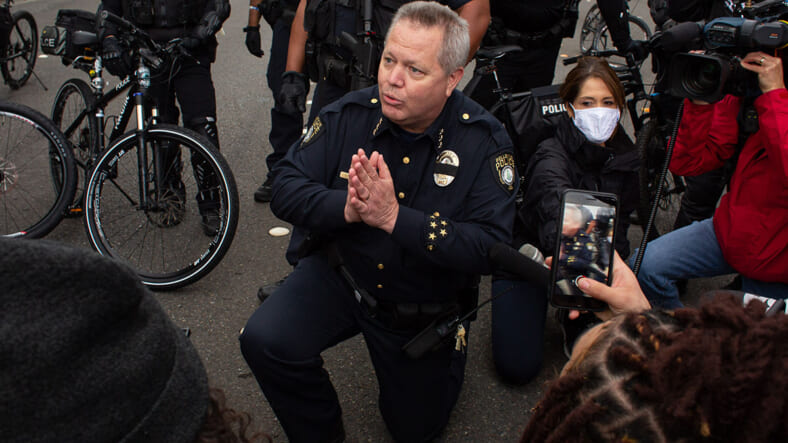 Bellevue Police Chief Steve Mylett kneels next to demonstrators while talking with them during a gathering to protest the recent death of George Floyd on May 31, 2020 in Bellevue, Washington. (Photo by David Ryder/Getty Images)

As mayhem continued to spread across the nation this week over the murders of Breonna Taylor and George Floyd, police officers and deputies have been winning praise for crossing the line and showing solidarity with protesters.

In these moments, which have gone viral across social media and news outlets, crowds have cheered and applauded cops as they’ve kneeled, hugged, sought dialogue, listened, prayed, and shook hands in a show of support for the protests.

In Flint, Michigan, for example, Sheriff Chris Swanson gained nationwide praise when he put down his baton, took off his riot gear, and told protesters, “We want to be with y’all for real. I want to make this a parade, not a protest. These cops love you.  You tell us what you need us to do.”

He peacefully marched with them to a local Target while giving high fives and posing for selfies with protesters. Scenes like this have gone down in cities from Oakland to Atlanta, and even across the Atlantic in London on Downing Street. They have been described in headlines and tweets as “a beautiful moment,” “a turning point,” “unifying” and “hopeful.”

At first glance, these made-for-TV moments may seem like humbling and welcomed gestures signaling that cops finally realize that they have more in common with protesters than their bosses.

But don’t be fooled.

These displays are a PR strategy being used to quell the rage and an attempt by police departments to redeem their image. In some of these same staged spectacles, the cops have lured protesters into a false sense of love, trust, peace and community, and then minutes later the mace, tear gas, flash-bang grenades and rubber bullets began to fly.

In Manhattan, cops tricked excited protesters by kneeling and then tear-gassing them when they got close enough. Not surprisingly, the protesters were stunned and angry because they presumably believed that a change had come.

It would be easy for us to shake our heads and ask: What were they thinking? How could they not recognize the setup? How could they be so trusting and naïve? But their actions are a consequence of media hero-worship of police, not knowing the history of civil rights protests, the lack of preparation and training for a 21st-century fight for racial justice, denial about the slyness of how agents of the state uphold white supremacist agendas, and people’s genuine desire for racial harmony.

In Orlando on Sunday, at the most segregated hour in America, police sanctified a protest with prayer followed by mace. The next day, our white supremacist-in-chief followed suit in similar fashion at St. John’s Church in Washington, DC.

The police used batons and tear gas to part the sea of protesters for him so that he could stage a photo-op. While holding the Bible upside down, he gave his anointing command to police: behold, “dominate the streets.”

?? RT @NeeNeinNyetNo: Literally 45 minutes later they maced us in the face for the crime of standing in their vicinity https://t.co/N2LQ7yetRl

The police are out here committing war crimes on their own citizens.#GeorgeFloydProtests #protests2020 #NoJusticNoPeace

One protester tweeted that members of the New York Police Department “beat the sh*t out of us” one hour after they took a knee. In Washington Square Park, NYPD’s top cop Terence Monahan kneeled in solidarity, hugged protesters, and made them feel safe to express their anger.

“Protest, yell, scream, let your rage out, but don’t take your rage out on the community, destroy the businesses that actually employ members of this community,” Monahan said.

When asked if racism plays a role in the disproportionately higher number of officer-involved killings of unarmed Black men, he was adamant that racism had nothing to do with past incidents in New York, the land of stop and frisk.

“I don’t believe racism plays a role in New York. I can only speak for what I’ve seen in New York City,” Monahan said. “I would never say that we are a racist police department. Absolutely not. Have incidents happened? Maybe there was a racist incident, something, and that person has been removed from this agency? Absolutely.”

He punctuated his comments by saying, “We all care about the communities we work in. We care deeply in the minority communities, the cops that work there, each and every day.”

The minority communities? He might as well had said, “We love the Blacks.” Monahan and others would have us believe that the proof of cop’s love is in their kneeling.

But lest we forget, that Monahan lords over the same city where Donald Trump called for the execution of four innocent teenagers who were falsely accused of raping a white woman in Central Park. It’s where 66-year-old Eleanor Bumpurs was shot to death when cops tried to evict her from public housing and where police officers pumped a combined total of 91 bullets into Amadou Diallo and Sean Bell.

It’s the same city where a police officer choked the life out of Eric Garner on the street and then blamed him for his own death. And it’s the same city where cops were recently found to have engaged in a racist double standard by arresting more Black people for violating social distancing rules during the current COVID-19 pandemic.

They beat the living shit out of us one hour after this. https://t.co/qROFE1YY2R

We aren’t suggesting that every cop who takes a knee is engaging in performative solidarity to bait or mock protestors. There are some who are being genuine. For example, last Sunday night a DC cop was repeatedly yanked and dragged off his knees by his fellow officers. As he refused to hide behind the blue wall of silence, his colleagues’ actions remind us of whose side they really stand on.

They kneel now, but we can’t recall officers kneeling in support of protestors following the killings of Michael Brown, Tamir Rice, John Crawford, Eric Garner, Freddie Gray, and so many others. Police officers will kneel one minute and brutalize the next and then engage in silent complicity.

Even during these current upheavals, cops are brazenly knocking people in the head, beating them in alleys, yanking off protective masks to mace protesters in the face. And, they haven’t stopped kneeling on bodies. In Seattle, one officer put his knee on a man’s neck during an arrest as protesters yelled “get your fucking knee off his neck.”

All this kneeling is a de-escalation tactic disguised as solidarity. The displays of care and love do not absolve police departments for decades of life-taking racist sins. It is not evidence of change, a sign of a new day, or confirmation that these agents of the state truly believe that Black lives matter. 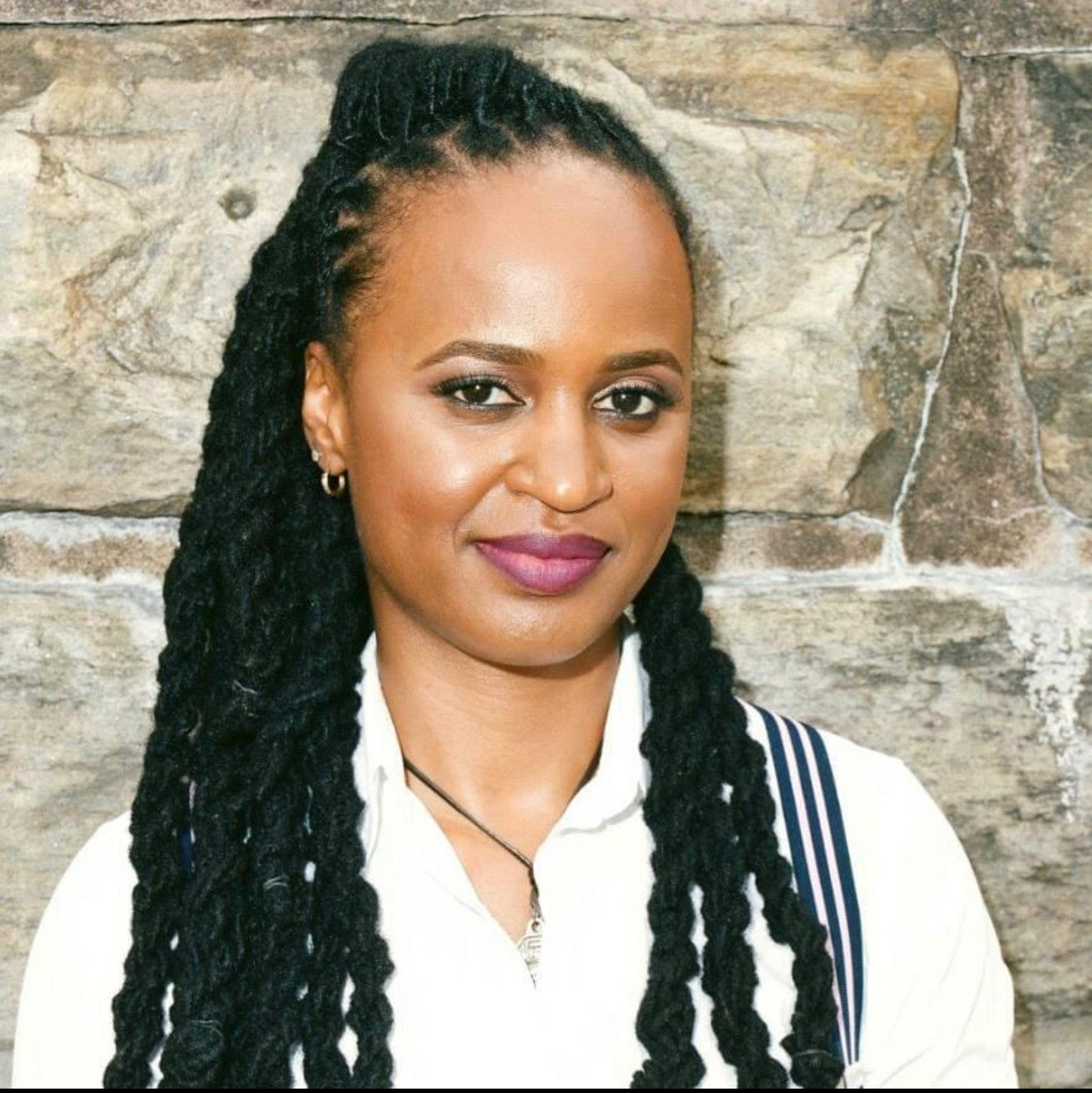 Stacey Patton is an award-winning journalist and the author of Spare the Kids: Why Whupping Children Won’t Save Black America and the forthcoming book, Strung Up: The Lynching of Black Children in Jim Crow America.

David J. Leonard is a professor of ethnic and American studies at Washington State University at Pullman and the author of Playing While White: Privilege and Power On and Off the Field.