About a dozen audio and dashboard camera video recordings from the May 23 traffic stop, shed more light on the death of 28-year-old Maurice Gordon. 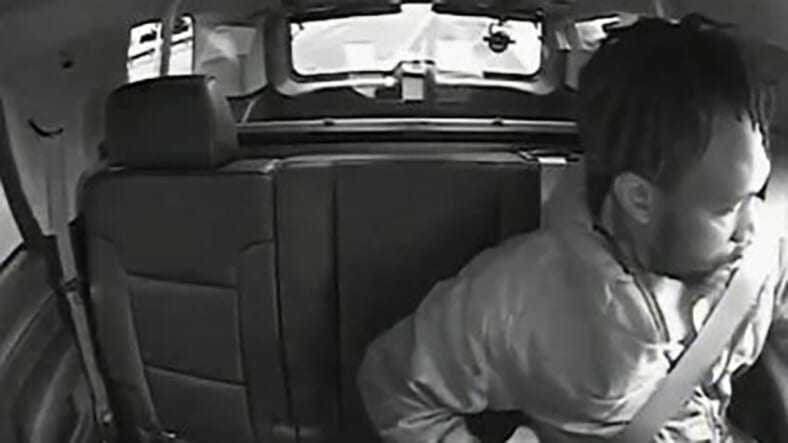 This image taken from May, 23, 2020, video shows Maurice Gordon, of Poughkeepsie, N.Y., as he unbuckles his seatbelt before exiting a New Jersey State Trooper’s vehicle in Bass River, N.J. (New Jersey Attorney General’s Office via AP)

About a dozen audio and dashboard camera video recordings from the May 23 traffic stop in Bass River, New Jersey, shed more light on the death of 28-year-old Maurice Gordon, a black man from Poughkeepsie. His death has sparked an investigation by the state attorney general and will lead the case to be presented to a grand jury under a 2019 law aimed at holding law enforcement accountable.

The trooper was identified for the first time Monday as Sgt. Randall Wetzel, according to New Jersey Attorney General Gurbir Grewal, who said the shooting is still being investigated.

The release of the videos Monday came amid global protests of police use of force against black people, touched off by the death of George Floyd, who died two days after Gordon after a white Minneapolis officer pressed a knee into his neck.

Also released were audio recordings of a 911 call from the day before the shooting made by one of Gordon’s friends, who said Gordon had left his house in the middle of the night looking “really panicked.” 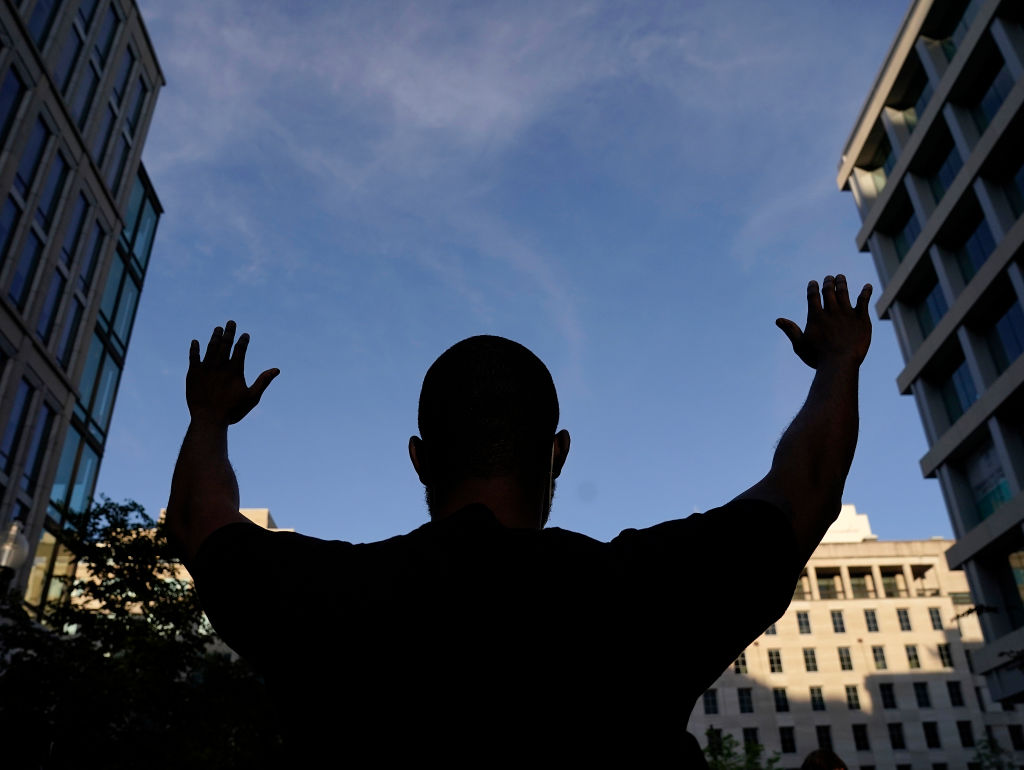 WASHINGTON, DC – JUNE 01: A demonstrator holds his hands up during protest on June 1, 2020 in downtown Washington, DC. Protests and riots continue in cities across America following the death of George Floyd, who died after being restrained by Minneapolis police officer Derek Chauvin. Chauvin, 44, was charged last Friday with third-degree murder and second-degree manslaughter. (Photo by Drew Angerer/Getty Images)

The attorney for Gordon’s family, William O. Wagstaff III, said in a phone interview he thought race was a factor in Gordon’s death.

“If Maurice Gordon was a white male he’d still be alive,” Wagstaff said.

A message was left at a cell phone listed for Wetzel, and another was left with the attorney general’s office asking if he has an attorney.

The video shows Wetzel, a white man, pulling Gordon over about 6:30 a.m. and telling him he stopped him because he was going 110 miles per hour.

Gordon had been pulled over about 15 minutes earlier and given a ticket for going 101 miles per hour on the Parkway and a few hours before that was helped by police to get a tow truck when he apparently ran out of gas, according to Grewal.

Before the shooting, Gordon pulled over, and Wetzel can be heard telling him the spot was not safe and that he should move his vehicle over more. Gordon is heard saying his car won’t start, and he tried unsuccessfully to turn it on.

Wetzel told Gordon he needed to pat him down, and then Gordon sat in the back of the vehicle without handcuffs.

Wetzel asked Gordon a series of questions, including where he was going. His responses were difficult to hear from the video. But Wetzel can be heard confirming that Gordon wanted to go buy a new car, leading the trooper to tell him he could not given the hour and the COVID-19 outbreak.

The trooper then asked again where Gordon was going, and can be heard confirming Gordon’s response, which is inaudible: Atlantic City.

Wetzel asked why Gordon was going so fast, but Gordon did not answer.

Wetzel offered to give Gordon a ride and call a tow truck, and again Gordon’s responses were difficult to hear. 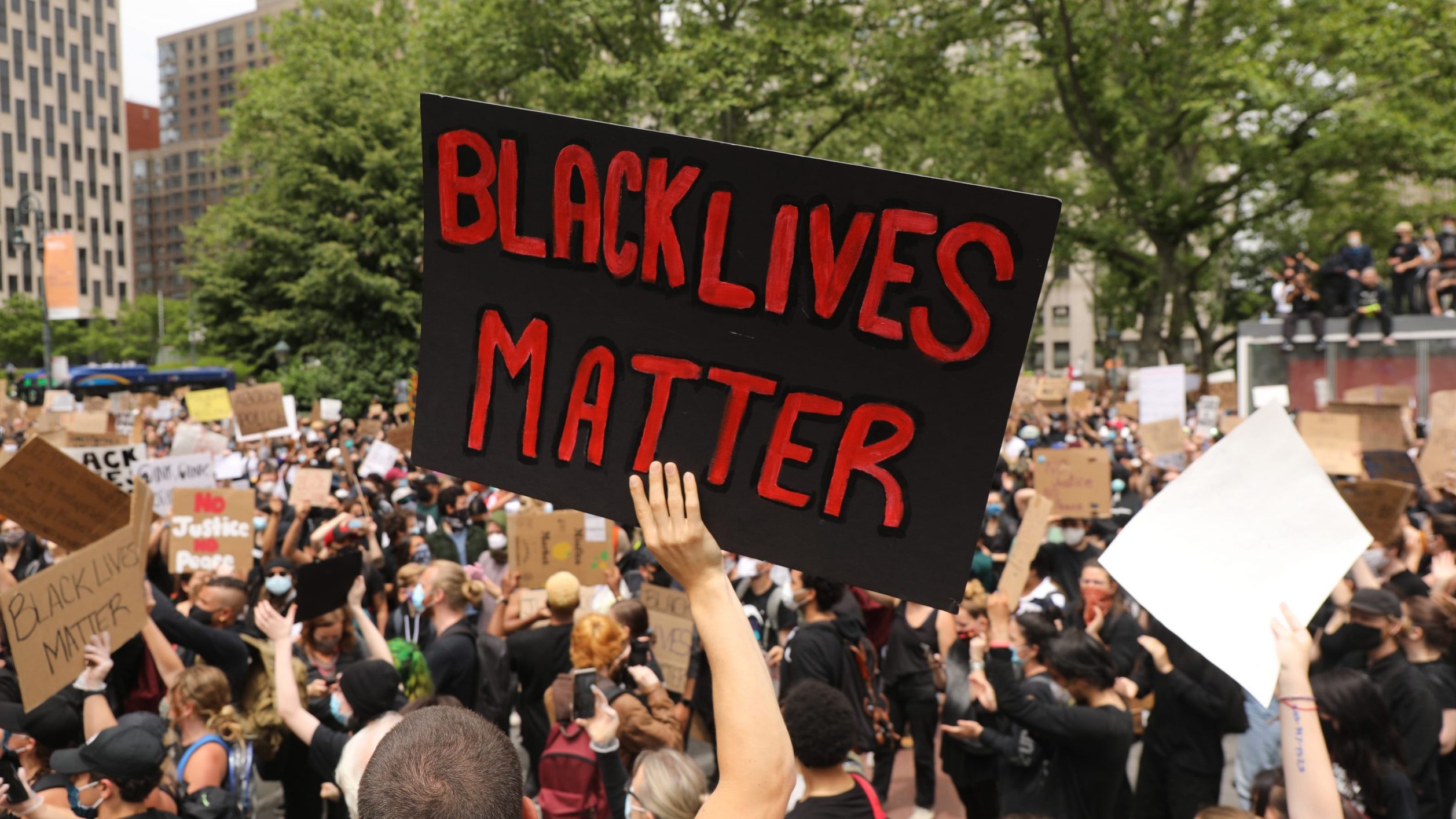 The officer continued to ask Gordon where he was going, why he was speeding and says he is trying to help him.

After roughly 20 minutes from the start of the traffic stop, Wetzel asked Gordon if he wanted a face mask.

“You want a mask like this to wear? Yeah? Do you have one in your car or no,” the trooper asked.

Gordon then released his seat belt and opened the car door, getting out of the police vehicle. Wetzel was off camera but can be heard using an expletive telling Gordon to return to the car.

Gordon returned to close the door and appeared to walk to the driver’s side of the vehicle in an attempt to get in.

“Get out of the car!” Wetzel yelled.

The men were off screen when the trooper called for another unit, and scuffling sounds could be heard before gunfire.

Another official arrived minutes after the shooting, and Wetzel told him what happened, including that he used pepper spray on Gordon. The pepper spray was not visible in the video.

“He was in my car, went to give him a mask. He tried getting out of my car. We got in a fight on the side of the road. He tried running into my car. I got him out, sprayed him. We got in a fight again. He ran away from me, tried to hop in my trooper car, grab my gun. We were fighting with my gun and I shot him. He was already cuffed,” Wetzel said.

It’s unclear when Gordon was handcuffed by the officer.

The trooper was not equipped with a body camera, though he had a body-worn microphone, according to the attorney general’s office. Wetzel belonged to a troop that patrols the Parkway and is in the process of getting body cameras, according to Grewal spokeswoman Sharon Lauchaire.