Mayor Keisha Lance Bottoms announced during a news conference that she had accepted the resignation of Police Chief Erika Shields.

ATLANTA (AP) — Atlanta’s police chief resigned Saturday, less than 24 hours after a Black man was killed by an Atlanta officer in a struggle following a field sobriety test.

Atlanta Mayor Keisha Lance Bottoms announced during a news conference that she had accepted the resignation of Police Chief Erika Shields.

Police were called to the restaurant on a complaint that a man was sleeping in a car blocking the drive-thru lane as customers waited in line, the GBI said. The agency identified the man who was fatally shot as 27-year-old Rayshard Brooks.

READ MORE: Black man dies after being shot in back by Atlanta police at Wendy’s sparkling lot on video

Brooks was killed by Atlanta police in a struggle following a field sobriety test was shot after he snatched an officer’s Taser and pointed it back at the officer while fleeing, the head of the Georgia agency investigating the case said Saturday.

“In a circumstance like this where an officer is involved in the use of deadly force, the public has a right to know what happened,” Reynolds told a news conference on a day when protesters gathered at the scene of the shooting and in other areas of Atlanta.

Atlanta police were called to the restaurant on a complaint that a man was sleeping in a car blocking the drive-thru lane as customers waited in line, the GBI said.

The shooting came at a time of heightened tension over police brutality and calls for reforms across the U.S. following the May 25 death of George Floyd in Minneapolis. Atlanta was among U.S. cities where large crowds of protesters took to the streets. 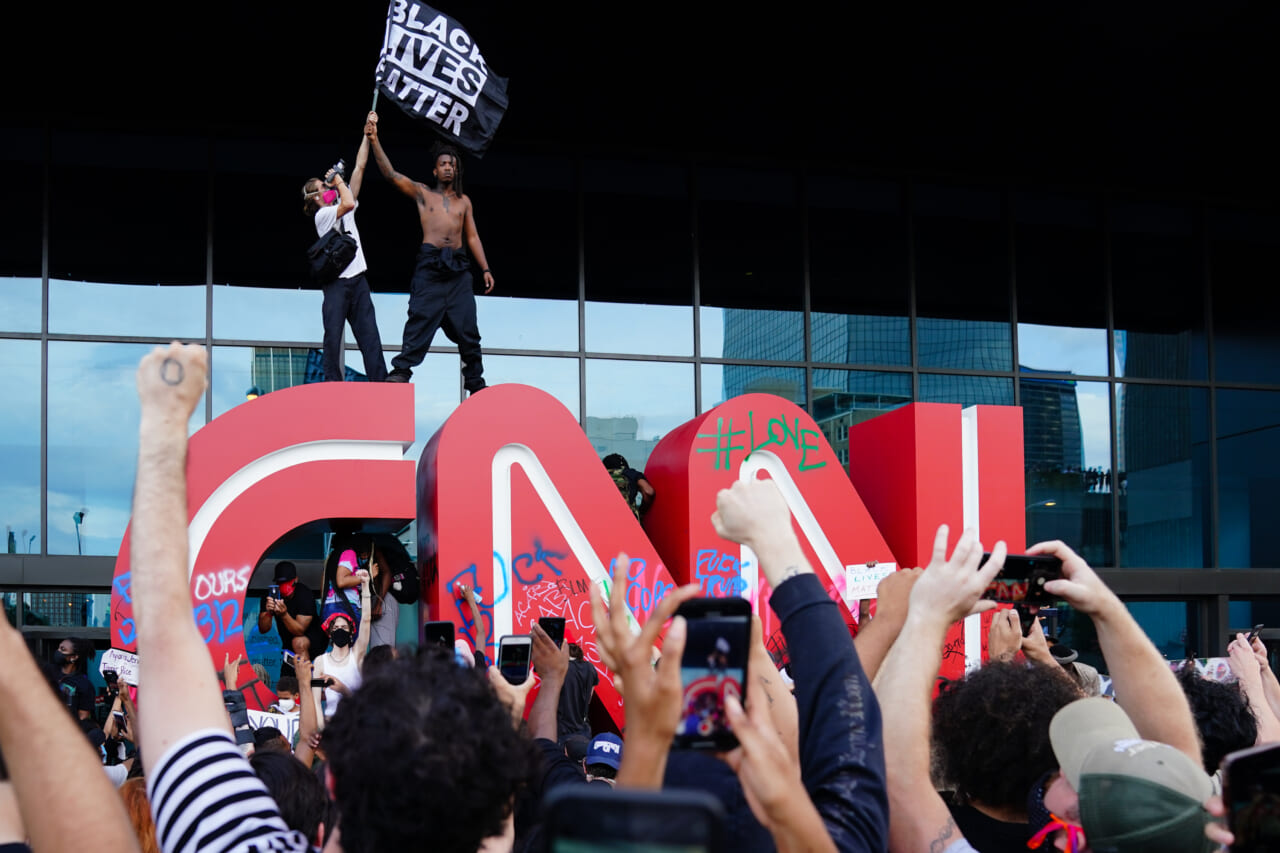 A man waves a Black Lives Matter flag atop the CNN logo during a protest in response to the police killing of George Floyd outside the CNN Center on May 29, 2020 in Atlanta, Georgia. (Photo by Elijah Nouvelage/Getty Images)

A crowd of demonstrators gathered Saturday outside the Atlanta restaurant where Brooks was shot. Gerald Griggs, an attorney and a vice president of Atlanta’s NAACP chapter, estimated there were 150 people protesting at the scene as he walked with them Saturday afternoon.

“The people are upset,” Griggs said. “They want to know why their dear brother Rayshard Brooks was shot and killed when he was merely asleep on the passenger side and not doing anything.”

Even though Brooks struggled with officers, Griggs said, “they could have used nonlethal force to take him down.”

Reynolds said his agents worked through the night interviewing witnesses and reviewing video. He said their findings show that Brooks tried to fight off two officers when they tried to arrest him and at one point managed to take a Taser away from one of them.

A security camera recorded Brooks “running or fleeing from Atlanta police officers,” Reynolds said. “It appears that he has in his hand a Taser.”

During a short foot chase Brooks “turns around and it appears at that time he points a Taser at an Atlanta officer,” Reynolds said. That’s when the officer drew his gun and shot Brooks, he said, estimating the officer fired three times.

Atlanta Deputy Police Chief Timothy Peek told reporters late Friday that both officers deployed their Tasers in an attempt to subdue the suspect but were unable to “stop the aggression of the fight.”

Reynolds said his agents will turn over results of their investigation to Fulton County District Attorney Paul Howard, whose office will decide whether criminal charges are warranted against either of the officers.

“My office has already launched an intense, independent investigation of the incident,” Howard said in a statement, saying members of his staff “were on scene shortly after the shooting, and we have been in investigative sessions ever since to identify all of the facts and circumstances surrounding this incident.”

Stacey Abrams, the Georgia Democrat who gained national prominence running for governor in 2018, tweeted Saturday of the shooting that “sleeping in a drive-thru must not end in death.”

“The killing of #RayshardBrooks in Atlanta last night demands we severely restrict the use of deadly force,” Abrams’ tweet said. “Yes, investigations must be called for — but so too should accountability.”

The officers involved in the shooting were not identified.

Brooks died after being taken to an Atlanta hospital. One of the officers was treated and released for unspecified injuries.