'That's Karen and she's calling the cops, and this is going to be really funny,' James Juanillo says, who was accused of vandalizing his own property 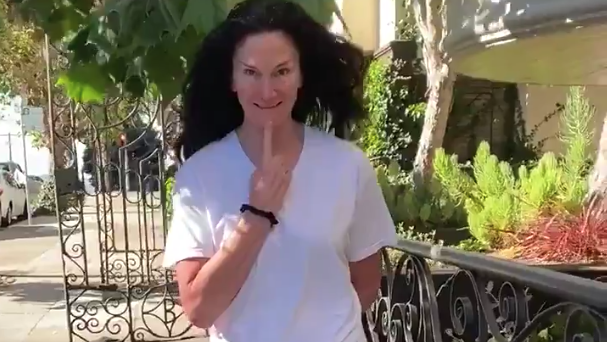 In San Francisco, a white couple accused a Filipino man of defacing private property when he stenciled “Black Lives Matter” on a wall in chalk.

The jig: it’s his own property.

In cellphone footage that has circulated the web, James Juanillo, who goes by Jamietoons on Twitter, can be seen confronted on the sidewalk by the passerby.

“A white couple call (sic) the police on me, a person of color, for stencilling (sic) a #BLM chalk message on my own front retaining wall,” he wrote in a tweet sharing the nearly two-minute clip. “‘Karen’ lies and says she knows that I don’t live in my own house, because she knows the person who lives here.”

A white couple call the police on me, a person of color, for stencilling a #BLM chalk message on my own front retaining wall. “Karen” lies and says she knows that I don’t live in my own house, because she knows the person who lives here. #blacklivesmatter pic.twitter.com/rOpHvKVwgP

Since posting the video to Twitter on Friday, the tweet has been retweeted more than 147,00 times as of Sunday afternoon.

Lisa, the woman in the video, can be heard asking Juanillo if it was his property. Juanillo responded by asking why she was inquiring. The accompanying gentleman, Robert, then jumps and can be heard replying “Because it’s private property.”

“You’re free to express your opinions, but not on people’s property,” Robert said, who attempted to explain how Juanillo should take a stand for Black Lives Matter.

“Absolutely. You just — respectfully. So, we’re just saying, absolutely, your signs and everything, and that’s good,” Lisa harangued. “This is not the way to do it. It’s private property.”

As the dispute continued, Lisa and Robert both accused Juanillo of breaking the law, claiming that they knew the property owner.

“Your choices are to call the cops, if you believe I’m [committing] a crime, and I will more than be happy to talk to them,” Juanillo said.

Robert and Lisa then proceed to walk away.

As KPIX reports, Juanillo is a gay Filipino and says he knows how it feels to be discriminated. He has lived at the home in Pacifico Heights, a San Francisco neighborhood, for nearly two decades. He operates a dog walking business.

Lisa was identified as Lisa Alexander, CEO of a skincare company in San Francisco called LaFace, according to the CBS affiliate. Makeup distribution company Birchbox said it has “cut ties with LaFace,” condemning Alexander’s actions.

A note from the Birchbox Team regarding Lisa Alexander and LAFACE. pic.twitter.com/CZSpBQegeA

“And that, people, is why Black Lives Matter,” Juanillo said before the viral video clip ends. “That’s Karen and she’s calling the cops, and this is going to be really funny.”