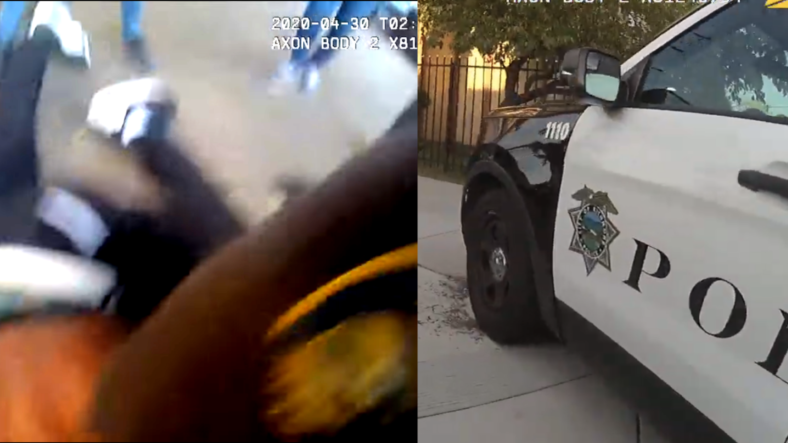 Police officers in the city of Richmond, California are under scrutiny after a minor arrest turned into two viral videos.

The incident occurred when a man and a woman were detained by police for smoking weed in a car. Several concerned community stake-holders inquired why the officers were harassing the couple and as a result, three people were violently assaulted and apprehended.

READ MORE: California police kill unarmed man who was kneeling with hands up

As seen in the one video, a bystander named Dejon Brown witnessed the arrest of the male from the vehicle, and said, “Y’all need to do your job.”

Brown continued to be combative with the officer, identified as Ahmed Khalfan, even after being told to leave the area. At some point in their confrontation, the civilian remarked, “I’ll beat your a**.”

The rest is messy history; one that has gotten all of the officers involved in trouble.

Brown, who challenged the cop, was then rushed by multiple officers on the scene, gripped up by his chest, tussled down to the ground and handcuffed.

The video becomes chaotic, as a different officer runs in the opposite direction to chase another man, Dareron Brown, for stepping in to make sure his brother was safe. This officer then tases him in front of more community stake-holders, who yell at the cops to leave him alone. In return, that officer threatens them also.

In a second video, another man named Johnathan Spragan tries to de-escalate the traumatic ordeal after he walked by, and observed the officers. However, the police are combative with him even as he raises his hands in compliance with their orders.

He is then seen being walked away by a neighbor. However, he comes back to the scene, and the cops violently arrest him too.

The charge? Violation of the face mask ordinance.

The entire ordeal was submitted to TMZ by an attorney who is helping victims sue for excessive force. All of the bystanders involved were charged with “felony resisting of an executive officer.”

According to the Mercury News, the Lafayette-based attorney Daniel Horowitz file a civil complaint on behalf of Dejon Brown.

Horowitz reports that police created a report of the incident that detailed a completely different story than what the officer’s bodycam footage actually shows. The officers tried to say that Brown came toward Khalfan.

In addition to Khalfan, the following officers are listed in the complaint: Brandon Hodges, Jesse Sousa, and Kristian Palma.

The Bay Area has been the center of multiple protests in the wake of the police killing of George Floyd. The home of the University of California-Berkeley is known as a hub for progressive thinking.

Bay Area psychologist and UC-Berkeley professor, Jack Glaser said the coronavirus pandemic highlighted a “stark conflict” between police and the communities they serve. He said that the “devastating” history of American racism has made for a system where it is difficult to approach police reform.

“I wouldn’t infer that there’s anything particularly unusual happening now,” Glaser said, “Black Americans have been encountering this for centuries. It’s a steady-state problem… The main difference we’re seeing now is the capacity to video record.”

The noted psychologist said that the “toxic legacy” of America’s police department can only be solved through strong policy, and possibly shifting funds to other social services

“Nine minutes of a police officer with his knee on the neck of a man who’s saying he can’t breathe,” Glaser said. “This man is being held down by two other officers, so there’s not even a concern about flight. We can all see him die in slow motion. There’s no turning away from that.”