President says to those who have lost family members and loved ones, 'I could never imagine your pain or the depth of your anguish' 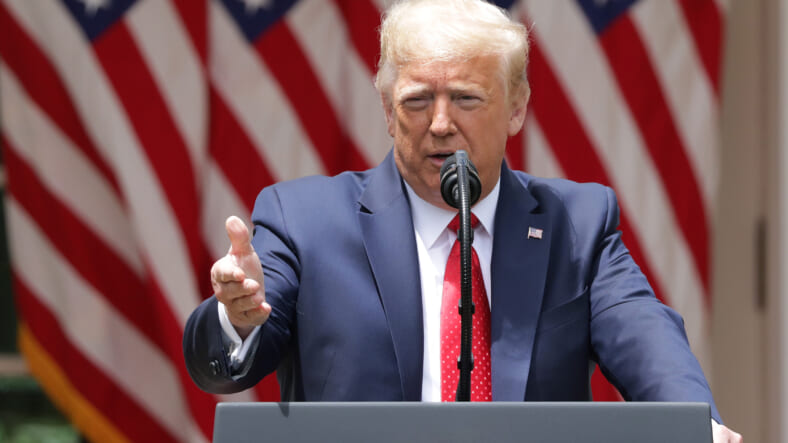 In announcing his executive order on police reform, President Donald Trump said that he met privately with Black families of police violence.

The president’s executive order would limit the use of chokeholds and create a national database for police misconduct.

Congress is working to pass additional legislation on police reform in response to the national outcry in the wake of the police killing of George Floyd in Minneapolis.

S. Lee Merritt, an attorney who represents a number of the families called the order, a “step in the right direction.” Merritt is also scheduled to meet with Republican and Democratic lawmakers and testify before the Senate on police violence.

In a press conference, Merritt was asked if he has any reservations about working with Trump who has been widely called a racist. Merritt said that his focus is on getting justice for the families.

“We are the deadliest and the most incarcerated nation on the planet and so that’s not a partisan issue,” Merritt said, “Whoever is offering solutions, are willing to work together across the aisle to change the actual laws that allow for this pattern of brutality and injustice and lack of accountability, then we’re willing to work with them.”

Civil Rights leaders have critiques Merritt’s position, believing that it undermines the work that they have been doing and calling it a ‘photo-op.’

EXCLUSIVE: #CivilRights leaders are OUTRAGED after a late night Tuesday call where they learned that Lee Merritt (@MeritLaw) & family members of #AhmaudArbery are expected to be on hand at the #WhiteHouse for a photo op during @realDonaldTrump’s #PoliceReform executive order.

Reports of a photo op with the president or standing with the White House during the EO signing are false.

Show me the civil rights leaders who are upset about families making a direct appeal for federal intervention after the murder of their loved one & I’ll show you a clown. pic.twitter.com/GXR5arB8Mz

READ MORE: Obama trends as Twitter shows appreciation for him on Trump’s birthday

At today’s press event, the president said that violence by police is the fault of a “very tiny number of bad police.” He also publicly mentioned his private meeting with the families.

“I could never imagine your pain or the depth of your anguish, but I can promise to fight for justice for all of our people,” Trump said.