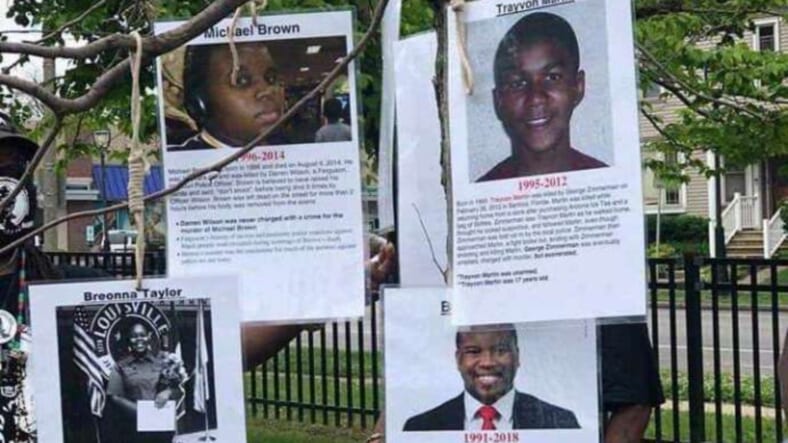 A Milwaukee, Wisconsin community is outraged after a group of photos of victims of racial violence was found hanging on nooses in the city’s Riverside Park.

According to WLKY, the photos were removed by local activists of the original Black Panther Panther (to distinguish them from the New Black Panther Party which has been defined as a hate group) and included pictures of Trayvon Martin, Eric Garner, Michael Brown, Botham Jean, Ahmaud Arbery and Breonna Taylor.

King Rick of the Milwaukee chapter of the Black Panther Party says that the photos were definitely racist in intent.

“Historically, African Americans have been hung and lynched,” Rick said.

“I don’t care what anybody says, they can justify it all they want to. It was disrespectful not only to the memories of these individuals — our beloved individuals — but also to the African American community, so I’m not hearing it.”

The nooses were removed and it’s unclear what was written on the descriptions that were on each pic.

Photos of a group of people who lost their lives to racial violence were hung up with nooses in Milwaukee.

This is just one of a series of incidents nationwide with racial overtones in the wake of the deaths of George Floyd, Taylor, and Arbery this year. All of the photos reference famous cases of racially-motivated killings from Martin’s in 2012, killed by security guard George Zimmerman as he walked home from a snack run in Florida, to Floyd, who was killed by Minneapolis police on Memorial Day.

In recent weeks, a series of mysterious hangings in California have also made the news. Both Malcolm Harsch and Robert Fuller were found hung in nearby cities in Southern California. While Harsh’s family, after reviewing footage provided by police, now believes that his death was a suicide, Fuller’s family is waiting for results from an investigation into his death. They say he was not suicidal.

As reported by the Grio, Harsh, 38, who had moved to California from Ohio, was living in a homeless encampment there, unbeknownst to his family. Police provided the family with video footage that seems to indicate that he died by suicide, though a final cause has yet to be determined.