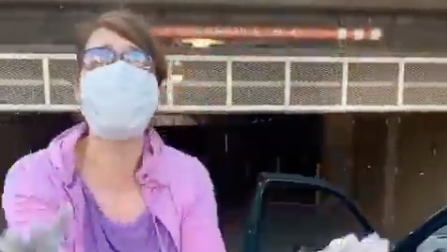 A "Karen" in Seattle is shown in a Instagram screenshot. (Credit: @karlosdillard)

It seems that the nation has another Karen on the loose. According to a video published on Tuesday, Karlos Dillard, a Black man based in Seattle, was driving and was cut off by the unnamed white woman.

In the video clip, he repeatedly states that she cut him off, flipped him, and called him the n-word. Instead of letting the offense ride, he followed her to confront the indignities.

After he flicked the door open, the woman went on an over 5-minute tantrum, screaming deliriously that she was being assaulted — an accusation that has historically gotten Black men killed. In her hysteria, she not only acts as the victim, crying out as if being attacked by the man, but also reveals that her husband is a Black man.

“Karen got caught with her road rage. I’m literally not leaving my house anymore. This Karen cut me off, break checked me and then followed me for 4 blocks. When I started recording her antics she peeled off and tried to get away with her racism. I had time today to let her know that i am not the one. I’m glad SEVERAL white and black people saw her racism and had my back. #karens #seattle #blm #karlosdillard #karensinthewild”

I’m literally not leaving my house anymore. This Karen cut me off, break checked me and then followed me for 4 blocks. When I started recording her antics she peeled off and tried to get away with her racism. I had time today to let her know that i am not the one. I’m glad SEVERAL white and black people saw her racism and had my back. #karens #seattle #blm #karlosdillard #karensinthewild

Ironically, a white man —knowing that nothing had been done to the woman— came to her rescue.

More and more stories like these are popping up on social media. Black men and women are documenting racist acts and the world is finding that many of their recordings include these hyped-up performances by white women.

One popular example is Amy Cooper in New York City.

Cooper, a white woman, encountered Christian Cooper, a Black man, in the Ramble part of Central Park. The area is known to have many different types of birds, making it a popular place for birdwatchers.

One of the rules of the area is that dogs have to be on their leash so as to not disturb the birds, and Amy refused to put her dog on the leash after Christian asked her to. At the onset of the conflict, Christian started to record as Amy said that she will call the police and tell them that a Black man is harassing her.

She made good on her promise and the entire performance was caught on camera, leading to several repercussions for Amy, including the loss of her job.

This is a rare time of immediate reprimand for cases like this. Propagated out of the racist south after the end of slavery, according to the Southern Poverty Law Center, one of the biggest lies in a “white supremacists’ playbook” is to say a Black person hurt or committed a crime against a white person.

In a report, they state, “The idea that Black people are wantonly attacking white people in some sort of quiet race war is an untruthful and damaging narrative with a very long history in America. White Americans’ unsubstantiated views about the potential of violence from Black people were the number one excuse they used to justify slavery, lynching, Jim Crow, and various forms of mass incarceration.”

They also note that at the center of this is the myth of the aggressive Black man looking to dominate or commit sexual violence to the weak white woman.

Karens are conditioned by systemic racism to know that there is a dog-whistle signifying “sexual violence” when they cry out as victims. But with the use of technology, a combination of camera phones and social media, their cries have not have the same deadly impact it has had in the past.