Indiana man says white mob tried to lynch him, no arrests made

White supremacists tackled Vauhxx Rush Booker to the ground, and yank his hair out 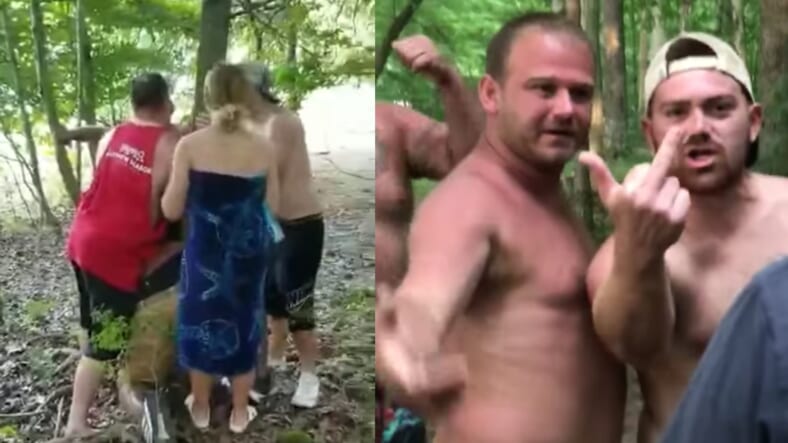 A group of white men attacked Facebook user Vauhxx Rush Booker at Lake Monroe in Indiana and threatened to get a noose.(Photo: Facebook/Vauhxx Rush Booker)
Also Read:
Indiana man says white mob tried to lynch him, no arrests made

A Black man in Indiana says he almost lynched by a mob of white supremacists who ambushed him in the woods.

The man identified as Vauhxx Rush Booker on Facebook detailed the July 4 encounter he had with a group of drunk white men who claimed he and his friends were on private property.

Booker and friends were trying to enjoy the view of the lunar eclipse at Lake Monroe in Bloomington, Indiana, he shared in a lengthy post on Monday.

At first, Booker and a friend were confronted by a lone white man, sporting a large hat with a confederate flag on it while on an ATV.

The driver told the two they were trespassing on private land, and he followed them to ensure that had left.

When Booker and his friend relayed the incident to their trip organizer, it was then they realized that the man wearing the confederate hat was not the property owner.

The intense conflict seemed suspicious for Booker, but he was determined to enjoy his time with nature.

Booker and his friend decided to take the public route from the beach to avoid similar people. However, the group ran into more drunk individuals, screaming “white power” as they blocked the beach pathway with their ATVs and boats.

With no way to evade the conflict, Booker’s group retreated from the way they came.

On their way back, Booker and his friend thought it was best to talk with some of the sober white men to lead them out of danger.

The sober white supremacists, with malice intent, directed the duo to a trail. The Black man and his friend were still being followed and taunted.

Suddenly, two white supremacists tackled Booker to the ground. Soon after, a total of five people jumped Booker, dragging his body and pinning him against a tree.

Booker endured a lot of pain. They hate group tore off some of his hair as they continued to beat his head and body.

During the attack, one of the men pressed his full body weight on his neck.

Thankfully, Booker was saved when white bystanders showed up to intervene and begin filming which caused the attackers to get more aggressive.

“‘We’re going to break his arms,’” Booker recounted one of his attackers saying.  “Then stated to the members of their party several times to ‘get a noose,’ amongst some other choice slurs.”

The onlookers managed to get the white attackers to leave, and some allies were able to stop the white supremacists from following Booker and his friend any further.

Booker said he called 911 and was transferred to the Department of Natural Resources (DNR).

The DNR conducted a review by contacting the attackers first, Booker said, and despite being shown video footage of the group attacking him, witnesses who saw the attack and prevented it, and yelling derogatory remarks, no one was arrested.

“The officers stated they contacted the Prosecutor’s office who relayed there was no immediate need to arrest anyone, and that the officers would simply file a report,” Booker said on Facebook. “I’m gravely concerned that if any other people of color who were to cross their path they could be killed.”

According to Booker, Bloomington had three similar hate attacks where the police were complicit within a month.