Lorenzo Jones, with a woman and three children nearby, gets hit by SWAT fire during an arrest attempt 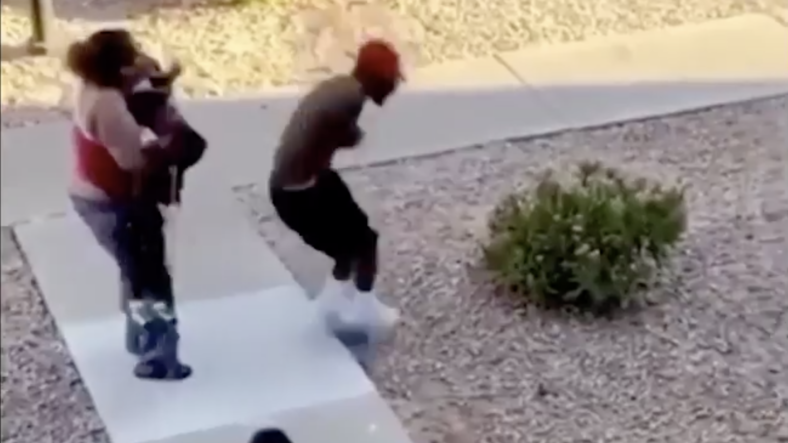 Lorenzo Jones gets hit with non-lethal bean bags when confronted by police in Arizona.

A Black man in Arizona failed to show up at a court hearing and was later met with non-lethal police fire, according to video obtained by TMZ.

Authorities confronting Lorenzo Jones found the man outside with family members, including a few children. In the video, Jones can be heard telling the authorities that in fact did show up for court, but it’s not clear as to whether his obligations were fulfilled.

The SWAT team instructed Jones to put his hands up as they moved in to arrest him.

Jones follows through on the officer’s request, but less than 30 seconds later bean bag rounds are fired, hitting him in the torso. He falls to the ground on impact and a woman screams and scrambles from the area while carrying the children to safety. The SWAT team was not visible on camera at the time of the shooting.

Someone off-camera tells Jones “I can’t even help you, because I’m not getting shot,” and advised him not to move. The SWAT team tries to instruct him again as he painfully moves around on the ground.

One officer can be heard telling Lorenzo to keep his hands up. As he turns to do so, two more shots are fired at him.

The Mesa Police Department is investigating the incident, and as of right now see the use of force against him as appropriate.

“They [the cops] felt that he was armed and dangerous,” Chief Ken Cost said.

From the video, it doesn’t appear Jones is armed and he continues to keep his hands up until he is shot.

“Less-lethal tools are exactly that, less lethal, and were developed to prevent violent actions, protect the public, save the lives of suspects as well as officers,” Cost added.