Davis created 'Focus' while battling cancer for the second time 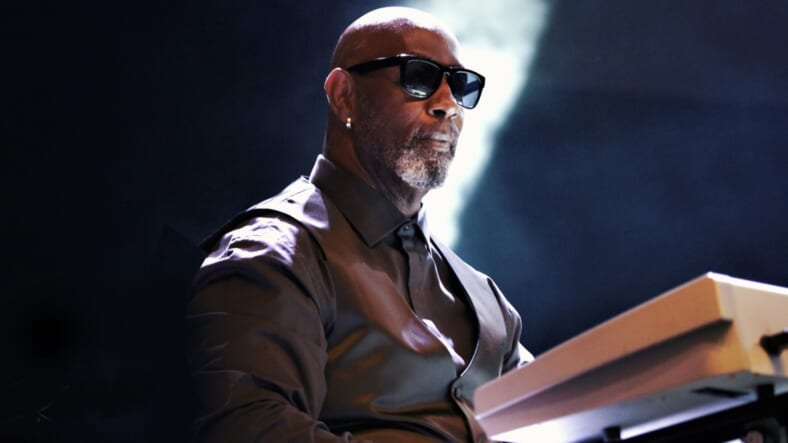 Chris “Big Dog” Davis is a Grammy-nominated producer and pianist who prefers to stay in the background. His debut album Focus, recorded while he battled lymphoma, is now a moment for him to enjoy life and the spotlight.

Davis was drawn to music early in life, playing the piano since the age of four while growing up in Waterbury, Connecticut. His skills were honed at Refuge Church of Christ where he played and his mother was the choir director. She ultimately saw his talent and provided him with a private teacher to help him evolve.

“They knew I had a gift,” Davis recalls.

Davis studied classical composition at Yale University then entered the Marine Corps at age 20. After leaving the military, he worked as a bodyguard for R&B heavyweight Brian McKnight.

Davis got his big musical break while working with the superstar, playing alongside him on The Arsenio Hall Show, The Tonight Show, and The Rosie O’Donnell Show.

He’s since worked and toured with George Clinton, Will Downing, Syleena Johnson, Chanté Moore, and jazz singer Maysa. His Midas touch is now on display for his own solo effort which comes decades into his career.

The 11-track career milestone, released in June by Shanachie Records, also came while Davis was battling lymphoma for the second time. He was previously diagnosed in 2010 and began to experience symptoms such as weight loss at the end of last year while touring with saxophonist Gerald Albright.

He was admitted to Yale New Haven Hospital but remained determined to complete his album.

“I went in there in January. I didn’t come out until like February. I was in there for at least 30 days when they were diagnosing me and everything,” he shares.

“I was sitting down with my sister who was my caregiver, God bless her soul. She took care of me and I sat up here myself and I put the whole Focus record together.”

Davis describes this project as “gumbo” inspired, taking bits and pieces from multiple genres like gospel, R&B, and jazz. He played bass, keyboards and mixed it while still ailing.

“I’m here to tell people that you can win this. This is my second [bout] with stage four,” he says. “You have to stay focused.”

Contemporary jazz greats Dave Koz, Nick Colionne, Kim Waters, Rick Braun, and Albright are just some of the artists who offered their talents for this project. Davis’ determination to breathe life into the album even as his was jeopardized is a testament to his unshakable character.

Albright, who has known Davis for years, hails him as having the “X Factor” and being a “warrior” whom he is proud to call a friend and collaborator. Davis has been in his band for several years as his principal keyboardist and has co-produced some of his albums.

“Whatcha Gonna Do For Me” is one of the songs they worked on together for Focus.

“He’s very tenacious in whatever he wants to conquer,” Albright says. “I was one of the closest people to him during that season where he was going through cancer.

And we would talk either every other day or, you know, through email or a phone call, whatever it was., I was just kind of monitoring him and, and help try to support him in the best way I could,” the saxophonist recounts.

“He was always positive during that whole process. I didn’t feel any energy of depression. I mean, he was obviously concerned, but he knew that in order to live, he had to go through certain stages of medical healing and otherwise.”

Focus, in his view, is a labor of love.

“I’m just so elated in celebrating him now that he’s in total remission. And he’s back to the music 100%,” Albright says.

Maysa has known Davis since 2006 and praises him as a “beautiful spirit” and musical genius. The singer and songwriter is a co-writer on the title track.

“He a strong man because the prognosis was not so good and so he was planning just in case something happened,” she recalls.

Read More: The beat of a culture: how HBCU bands relate to Black music legacy

She hopes that listeners are inspired to be “grateful” for what they do have.

“Staying focused on the good things in life..trying to change your perspective to not just focus on everything that’s wrong but the time you have to get your life in order; the time you needed so desperately when the world was at full speed ahead and you were waiting for some time to do it. This is the time to do it,” she declares.

There are many artists who view success as platinum records and #1 singles. The barometer for Davis is that his message is heard.

Focus can be streamed on Spotify and is available for purchase.