Jeannine Lee Lake, who is challenging Greg Pence in November, says the mall is 'profiting from hate' 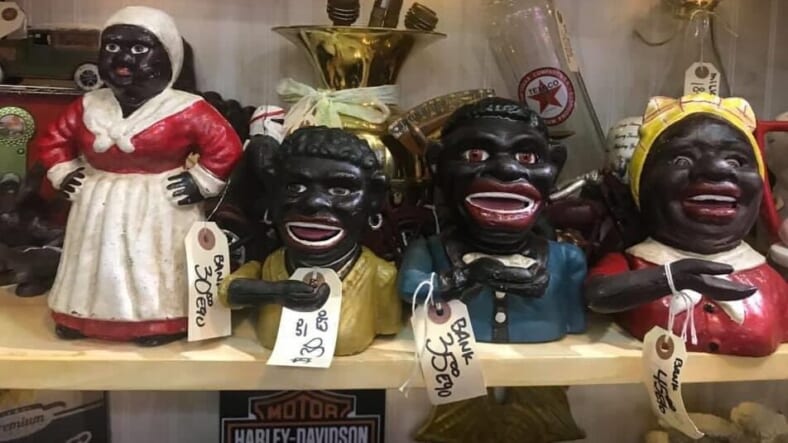 Racist memorabilia on sale at Exit 76 Antique Mall in Edinburgh, Ind. The mall is co-owned by Congressman Greg Pence. (via Twitter)

Congressman Greg Pence (R-In.) is getting public backlash for racist items being sold in a mall that he co-owns in Indiana.

Vendors at Exit 76 Antique Mall, an antiques Pence owns with his wife, are selling objects depicting Black Americans in stereotypical fashions, according to the Associated Press. Merchants can rent booths at the sprawling shopping center in Edinburgh, Ind., about 30 miles south of Indianapolis.

Over 4 million items are available for sale among the vendors, including other memorabilia like old baseball cards, Civil War relics and porcelain dinner sets.

Some vendors have been selling items of Black caricatures, such as biscuit jars depicting “Mammy” slave caricatures and coin jars with a Black man in a straw hat eating watermelon.

Complaints have been lodged against the mall’s choice to allow for the sale of Jim Crow-era memorabilia as far back as 2008, two years after Pence purchased the mall. The mall is now under the public microscope, thanks to Jeannine Lee Lake, the representative’s Black Democratic challenger.

“I’m officially calling out Greg and his wife, Denise, who co-owns the malls,” wrote Lake, who shared pictures of racist, homophobic and bigoted products on sale in a tweet.

“It made me want to cry,” Lake stated when she went to the mall in June to personally witness “rows and rows” of items being sold, “mocking Black skin, displaying protruding lips and having bugged out eyes.”

Smythe first complained to mall management about the racist items back in 2018. Although Confederate flags in the mall were removed, the racist caricatures continue to be sold.

AP said it discovered at least 36 racist goods for sale at the antiques mall in July. Pence’s spokesperson told The Star Press that the congressman is not intricately involved with the mall’s management.

“As you may know, Congressman Pence is not engaged in the active management of the Exit 76 Antique Mall,” Milly Lothian, the spokesperson, said.

The Star Press reports, however, that his wife, Denise, runs the mall. Lake, who took almost 33% of the vote in the 2018 race for the same seat in the red state, accused the center of “profiting from hate.”

Pence supporters came to the lawmaker’s defense on social media, saying that “It’s history;” “these items are found in all antique malls not just the Mall you’re attacking for political reasons;” and “they are antique collectibles sold in a free democratic country where we have freedom of choice,” the paper reports.

In light of increasing racial tension in the country being amplified by protests over the killings of George Floyd, Breonna Taylor and Ahmaud Arbery, Lake feels that bringing attention to Pence’s mall and the racist items on sale there is “a necessary action for an African-American woman running for Congress.”

Pence defeated Lake in the 2018 election to represent Indiana’s 6th Congressional District, which was held by his younger brother, current Vice President Mike Pence, for 12 years.

Lake will be on the ballot against Greg Pence in the November general elections.