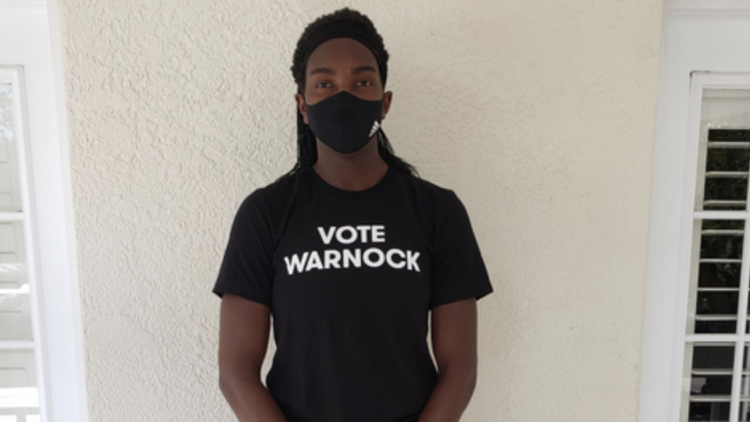 The women of the WNBA have emerged as powerful voices of the Black Lives Matter movement year.

Since the season returned at the end of July, players have demonstrated by kneeling during the National Anthem and wearing jerseys honoring Breonna Taylor who was shot to death in her home by police in Kentucky on March 13.

On Tuesday, players for the Atlanta Dream and other teams sported shirts reading “Vote Warnock” as a rebuke of U.S. senator Kelly Loeffler who has been critical of the league supporting BLM.

The senator wrote a letter in July condemning the league’s support of Black Lives Matter saying that it was politicizing sports. Players have continuously called for her to removed from her ownership of the Dream.

The shirts supported Rev. Raphael Warnock who is the Democratic challenger facing Loeffler in November’s special election. He has been the senior pastor of Ebenezer Baptist Church in Atlanta since 2005.

“We are players, but like the late, great John Lewis said, we are also ordinary people with extraordinary vision. (Rev. Warnock) has spent his life fighting for the people and we need him in Washington,” Williams wrote on Twitter.

Williams also retweeted a message from Warnock which read, “I am honored and humbled by the overwhelming support from the @WNBA players. This movement gives us the opportunity to fight for what we believe in, and I stand by all athletes promoting social justice on and off the court. #BlackLivesMatter.”

In a statement published by CNN, Loeffler called the action a continuation of “cancel culture.” She said that she remains opposed to Black Lives Matter because of its “radical ideals and Marxist foundations.”

Loeffler, who is worth over $500 million, has co-owned the Atlanta Dream since 2011. She was appointed to the Senate by Georgia governor, Brian Kemp in 2019. She is running to be elected to the seat.