The teenager was suspended for sharing a photo of a crowded hallway at North Paulding High School amid the coronavirus pandemic. 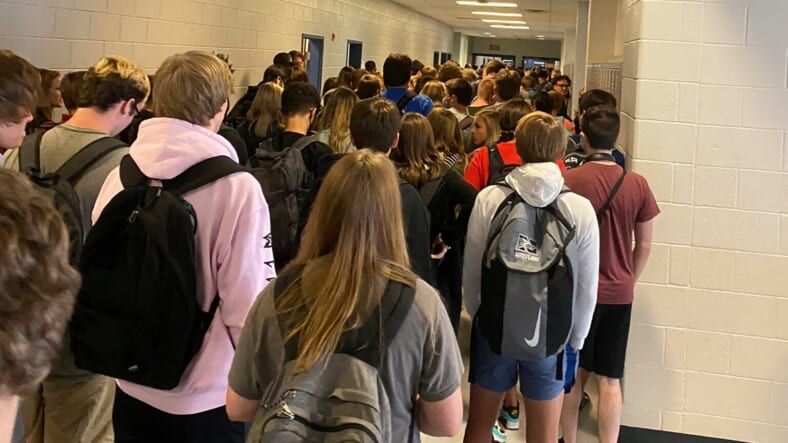 A photo showcasing an overcrowded school hallway went viral as debates continue on whether or not classrooms should be open amid the pandemic. The teenager who uploaded the image was initially suspended but the decision has now been reversed.

The Washington Post reports the suburban Atlanta school has issued an apology for any unwelcome attention the teen was given after the photo spread. Her mother Lynne Watters tells The Post North Paulding High School had ended her daughter’s suspension.

“The principal just said that they were very sorry for any negative attention that this has brought upon her, and that in the future they would like for her to come to the administration with any safety concerns she has,” Watters told the outlet via text message.

“[The principal] confirmed that she will have no disciplinary action on her record and she can return to school on Monday.”

The 15-year-old student, Hannah Watters, was handed a five-day suspension citing a violation of the school’s code of conduct by using social media during the school-day and recording video without permission. According to the Washington Post, she and a peer were both suspended. However, it is unclear whether the other student also had their punishment reversed.

Using her social media platforms, she uploaded photos and videos of a fully crowded facility and minimal masks.

READ MORE: Over 260 Georgia school employees under quarantine 1 day after returning to classroom

Principal Gabe Carmona issued an announcement to his school.

“Anything that’s going on social media that’s negative or alike without permission, photography, that’s video or anything, there will be consequences,” the administrator said over an intercom.

Fred Smith Jr., an associate professor of law at Emory University, informed Washington Post that the girl’s suspension held no weight due to her being off-campus when the media was uploaded.

“From a rights perspective, the question I would have is whether or not the school has exercised similar discipline for other students who have posted anything during the school day, especially instances of people posting favorable things,” he said to the Post.

theGrio previously reported students and faculty both fear the consequences of the non-adherence of social distancing guidelines. A student shared,  “There’s a lot of people in the hallways, and you can’t do nothing about it, so it’s scary.”

Amy Westmoreland, a nurse at the school, quit and shared her resignation letter with Buzzfeed.

“Masks are not a ‘personal choice’ during a pandemic. I cannot return knowing I am not supportive of your decision to open so quickly and not at least mandate masks,” she wrote.