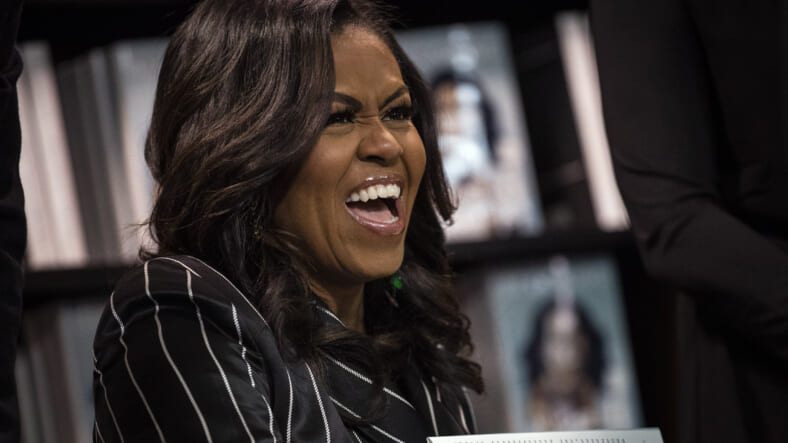 After dropping the first episodes of her self-titled podcast, former First Lady Michelle Obama has released an accompanying Spotify playlist full of incomparable Black female musicians. The compilation was made as a soundtrack to the first season of the new show.

As reported by Billboard, “Vol 1: The Michelle Obama Playlist” is an eclectic collection of songs that feature artists like Nao, Annie Lennox and Steve Lacy.

For the most part, however, it heavily highlights a talented array of Black female singers and MCs.

“Excited to share with you a new @Spotify playlist inspired by the first season of my new podcast. It’s filled with incredible new artists and a whole lot of #BlackGirlMagic,” Obama said in an Instagram post. “I hope you’ll give it a listen and follow some of these terrific musicians.”

The playlist, featuring more than 40 songs, is also filled with songs from some of the biggest names today, including “Black Parade” from Beyonce, “Made It” from Teyana Taylor, “Do It” from Chloe x Halle and “Still Blue,” a duet by Jill Scott and SiR.

Three artists were lucky enough to get multiple placements on the 41-track playlist. Taylor, SiR, and Grammy-winning singer and instrumentalist H.E.R. all appear twice.

“The Michelle Obama Podcast” is a partnership with Higher Ground, an exclusive Spotify hub. It is centered around Obama engaging in candid conversations with colleagues, family and friends.

The first episode premiered on July 29 and features her husband, former U.S. President Barack Obama. They discuss their marriage and civil service.