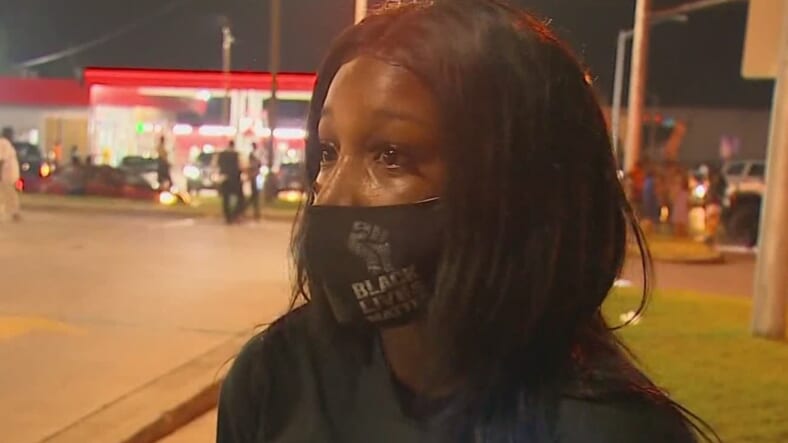 A Black Whataburger employee in Texas claims she lost her job after a white customer complained about her wearing a Black Lives Matter face mask. Instead of having her back, her manager ultimately ended up calling the police on her.

According to the Fort Worth Star-Telegram, on Tuesday, Aug. 4, a white customer walked into a Whataburger franchise in the predominately Black neighborhood in Fort Worth. She was so offended by Ma’Kiya Congious‘ Black Lives Matter face mask that she asked the 19-year-old for a corporate phone number.

READ MORE: BBC director apologizes after facing backlash over reporter’s use of n-word

“I asked, ‘Is it something I did wrong?’” Congious recalled while speaking to the publication . “She said, ‘They should not allow you to wear that mask … don’t worry about it you’ll be hearing from corporate.’”

Congious had been wearing the face mask for days. When she interacted with the district manager earlier in the day the mask was not an issue.

However, at the time that the complaint was made another high-ranking company official was there for a visit and she believes that’s why the woman’s threat to call corporate suddenly scared the manager.

To protect herself she also had the forethought to record part of her conversation with the manager.

“Whataburger wants you to wear a mask that has no opinions whatsoever on them. You’re entitled to your personal opinions and that’s fine. But at Whataburger we don’t want to portray them because some people may be offended. This is a big business,” the voice alleged to be the manager can be heard stating in the audio.

“Whataburger doesn’t want to get into anything political because we’re just hamburgers and fries,” she added.

When Congious inquired as to why the mask wasn’t an issue in all the days leading up to the customer’s complaint the manager claimed she was “waiting for the right time.”

When the manager tried to dismiss the importance of the BLM mask by saying, “We’re human beings, it doesn’t matter what color we are,” the teen can then be heard explaining, “My attitude’s been kind of crappy for the past couple of days because I had a Whataburger customer call me a n—-r. You know, that’s why my life matters.”

Instead of showing concern after that revelation the manager instead asked the employee to put in her two weeks notice.

“You want to put your two weeks’ notice in? We accept it and you don’t have to come back at all,” the manager stated.

That’s when a male voice can be heard agreeing with her immediate termination. When a then confused Congious asked for clarity on Whataburger’s mask policy, the managers then called the police and had five cruisers showed up.

“Officers made the scene and spoke with the female ex-employee who stated that all she wanted was the number to corporate to file a complaint,” a Fort Worth Police department spokesperson told The Star-Telegram. “Ex-employee was provided number by the manager and then left scene without incident.”

“Whataburger supports racial equality,” a statement from the company read along with assurance that the young woman will be paid for her last two weeks.

“This is simply a matter of enforcing our uniform policy. Whataburger employees are provided company-issued masks that comply with our policy and adhere to CDC and local government guidance.”

A day after the incident, local activists took to the streets to protest Congious’ treatment.

It has also been noted that when the company’s mask policy was reviewed it only read, “plain or work-appropriate patterned bandanas or other cloth material may be used to cover your nose and mouth.”