theGrio goes one-on-one with the award-winning author of young adult novels, featuring Afro-Latina characters, about manifesting your destiny and honoring your roots. 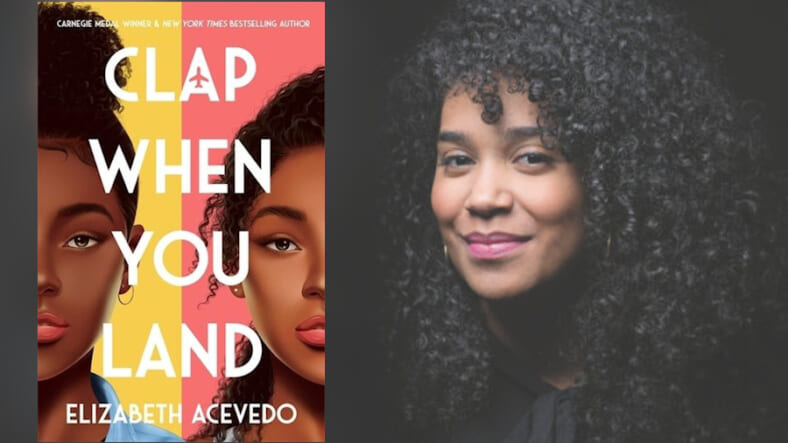 The first time I heard Elizabeth Acevedo speak, the world stopped. At least that’s how it felt when the NYC-born spoken word powerhouse raised her hand and spoke to the group. We were both young public school teachers at the time, trying to inspire our predominantly Black-Latinx students to realize their greatness in educational systems so fundamentally broken that even the best of intentions didn’t always feel enough.

Acevedo, who is Dominican-American, taught English to middle schoolers in Prince George’s County and I did the same in Washington, D.C. While our encounters were at professional development or teaching events, whenever Acevedo had something to say to the group, there was passion, rhythm, gravitas, and elevation in her words.

Her books center Black-Latin@ or Afro-Latinx characters in ways that mainstream novels often ignore. Even the book’s covers grab you with their rich colors and loving portrayals of melanin.

I reunited with Acevedo this summer across Zoom to get the 4-1-1 on her journey to becoming an author, how she’s making her mark on storytelling for the Black diaspora, and what Afro-Latinidad and negritude mean to her and the characters she creates.

theGrio: You have fans everywhere who know you as the author of The Poet X, The Fire on High and now Clap When You Land. But I want to take us back to your journey, talking about growing up in New York, your immigrant roots, and what led to you walking in your talent as a writer. Talk to us about what it took to get to this moment.

Acevedo: I was born and raised in this intersection between Harlem and Columbia University. Very much what felt like in-between worlds. But in a very Dominican immigrant Black community. My journey begins with my listening to my parents tell me stories, and with listening to bolero music and listening to hip hop. I wanted to write music long before I ever considered myself a poet or a writer…

But actually, it was teaching. I was an eighth grade English teacher, Prince George’s County, Maryland. I taught at a school that was 78 percent Latinx, almost 20 percent Black. They had never had an Afro-Latina teaching there at all. So here I am in this space where my students are so representative of the spaces I come from, and yet they had never seen a figure in front of them that reflected their background—and my students were struggling readers. So that was where the first kernel of “Maybe my writing is leading towards my offering something to these students.” That was where the idea of a novel first sprang up.

theGrio: In your journey, you talk about the “mainstream” interpretation of what stories matter and running into a professor who even challenged something that you suggested in class about what was worth writing about. How did you learn to assert your voice and to make space? And challenge people to make space for your stories?

Acevedo: I write hyper-specific work because I know that I have an audience and my audience might not be in that room, like in an MFA program or something like that. But my audience does exist. I think I’ve just been really lucky in knowing, “I know I have readers,” even before I knew I had readers. I mean I imagined the little shorty on my block, I imagined the homies. Like, let me write the book that I think they will want to read.

My books are very much about the little morenita that maybe doesn’t know how to come to terms with her religion and her Afro-Latinx identity. It is about a teen mother who is going to be the hero, who’s going to be the protagonist and saves herself. It is about this tragic event that happened in the Dominican community that nobody knows about. And my saying, “Like no, let’s take a moment and look at our stories too.” …So naysayers I always kind of knew, like maybe you’re just not my reader.

theGrio: I want to talk about grief in the realm of storytelling. Talk about your characters and the journey that’s in front of them [in Clap When You Land].

Acevedo: The story is taking these two girls whose father dies on the plane crash, but they don’t know about each other. He had a secret family and one lives in the D.R. and one lives New York, and they both want to travel to the other place. So this sister in New York desperately wants to accompany her father’s body back, and she’s never visited the Dominican Republic.

And then there’s the sister in DR who is in dire straits and with her father passing, realizes, “I actually can’t stay here in this way. Because I may not make it.” So she’s desperately trying to get to the U.S. And I think for me, it was a question of can we forgive people after they’ve passed? If they never ask for forgiveness. Can we bridge distance? And what is kin and how do we talk about kin?

theGrio: Why do you think it’s important for us to have characters that wrestle with their identity in this way and are part of the Afro-Latinx community at-large?

Acevedo: I’ve been reading up on Afro-Latinidad and “what is negritude?” and “how does Blackness in Latin America manifest?” for years. So when I am contemplating how to bring that into a novel, I’m thinking about how do I represent Latin Blackness in a way that doesn’t feel monolithic? Every one of my characters is Black. And every one of my characters wrestles with what that means.

I’m trying to think about the many ways that people might come to terms with their race and identity and provide young women reading different blueprints. There are many ways you can be you and that you can exist in your Blackness. And here are some questions you might be wrestling with because I know that I’ve kind of sat in, “what do I call myself?”

What doesn’t take up too much space? What does it mean to say, “Alright, I can be Black and not be Black American and still be in solidarity with Black Americans.” Recognize perhaps we have similarities, but also, like in supporting you, you might have differences. You might have things that you have going on because you generationally lived in this country that I may not understand. So I can stand here and be like, “I am Black, too, but I will be quiet because right now, this is a different beat. I can learn here.”

And this isn’t new. I think that’s my biggest thing, right? Negritude has been around. It has been a movement in Latin America for years, for decades. And we are finding the language and doing some deep dives, that also may complicate our understanding of our heritage.

theGrio: There are a lot of people in our community who have stories and have voices they want to raise. But they feel outside of the publishing world. Talk about that process of demystifying it. How would you encourage writers of color who are looking to break in?

Acevedo: I come from a place where I don’t like asking anybody for anything. It’s like I’ll go figure this out… I got on Twitter and started following agents and editors and kind of teaching myself the different roles, diving into people’s websites. It happened that I had left teaching and I was getting an MFA in poetry at the time. So I kind of modeled all of the things I was doing with publishing based off of what I was learning in the classroom. I kind of made my own MFA. In an attempt to overcompensate for what I thought everyone else knew that I didn’t, I think I was actually over-prepared.

I was paying attention to what editors were asking me about different projects and who was just trying to capitalize off, “Oh, this is a cute little trend, here’s a slam poet who wrote a book about, ‘Oh, Afro-Latinidad.'”

I think having that longterm vision was helpful. But I want folks to just do the work. Right. Do the research. Information is out there. There’s a lot of ways to hustle even before you’ve been signed to anything.

Read More: In NYC, how a new generation of Afro-Latinos celebrates their Blackness

theGrio: Basically, you set yourself up to manifest that destiny because you’ve got the knowledge. You sound like a teacher telling people to overprepare. Sounds like a teacher, right? (laughs)

Elizabeth Acevedo: It is manifestation. I mean, I remember when the book got picked up and there were questions around movie rights. I realized there’s a lot I don’t know about that. I started taking Shonda Rhimes, her master class. I made sure that I started taking filmmaking classes. I did all of this stuff so that I knew what that process might look like if and when.

When the second novel was acquired and they asked me to be the screenwriter. And I was like, “Yo, it’s a good thing that this last year I was already looking into what this means.” You know what I mean? That was my envisioning what could be possible and trying to ensure that I would be ready in the moment.

And I’m still learning a lot. For me, it’s like, “Where could this be going?” Alright, let me do that work now.

This interview was edited for length and clarity.