Allisha Tillman is still trying to wrap her head around the fact that news stations in Los Angeles have been front and center at recent police brutality protests, yet, the disappearance of her sister, Mikeona Johnson, did not get much air time.

Johnson’s family realized that the 23-year-old mother of two was missing after her boyfriend called her grandmother asking if she had seen Johnson. He told Johnson’s grandmother that he fell asleep after she went to get food for the family from a local burger stand and when he woke up, he realized that Johnson had not returned. 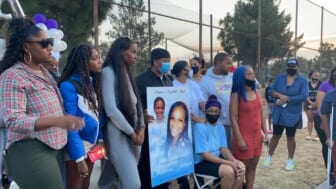 “It’s not like my sister to just disappear like that. She takes her kids everywhere like a wallet. Wherever she goes, they go,” said Tillman. “She doesn’t leave the kids behind for anything in the world, so we knew something was going on.”

Tillman found herself searching for her sister throughout the streets of Los Angeles with family members, using social media to gather tips and share the news of her sister’s disappearance.

Anytime someone would call with a tip, they would hop in the car and race to the scene, only to find that a car similar to Johnson’s had been spotted.

Johnson disappeared in her silver Mercedes on Wednesday, Sep. 9. Her decomposed body was found a week later in the backseat, parked on a quiet residential street in front of Manhattan Place Elementary school.

“My sister had the most beautiful smile and the deepest dimples. She had such a beautiful soul and wanted to help everyone. Mikeona has been through a lot and my sister tends to take on a lot,” said Tillman.

“People could do things to her and she would still break her back to make sure they are OK and that they have what they need.”

Johnson was a devoted mother who cherished her children, ages 1 and 5. She grew up in Compton and developed a strong faith at a young age, praise dancing with her sisters in church and joining a traveling choir.

Although she was a private person, Johnson had some relationship troubles, according to her family, and had devoted her life to the father of her recent baby.

“When you first meet someone, it’s the honeymoon stage where everything seems so cool and everybody’s so happy and does not want to leave each other’s side. But, as time progresses, that’s when you start seeing people’s true colors, especially when you have a child with someone.”

Tillman explained that the family questions the involvement of Johnson’s boyfriend not only because he was the last person to see her, but because he has given different responses to the same questions.

During a vigil held for Johnson last week, various Black women from the community spoke on the dangers of staying in abusive relationships, hoping to empower other women through their testimonies.

It was made clear that more resources need to be developed within local police departments to assist women who are dealing with domestic violence.

Tilmman expressed she would like to see quicker movement from police moving forward when women, and especially Black women, go missing in Los Angeles. She believes there is a chance her sister could have been found alive if police acted with more urgency.

Johnson’s aunt has mentioned setting up a trust for her young children. Tillman said she doesn’t know if anyone has told Johnson’s 5-year-old daughter yet, but she is aware of her mother’s disappearance.

“Everytime we would come back to the house from searching for Mikeona she would be at the door asking, ‘Did you find my mommy?’”