Republicans refused, saying they are taking advantage of the state's liberal ballot collection law that allows anyone to collect ballots from voters and deliver them to county election offices. 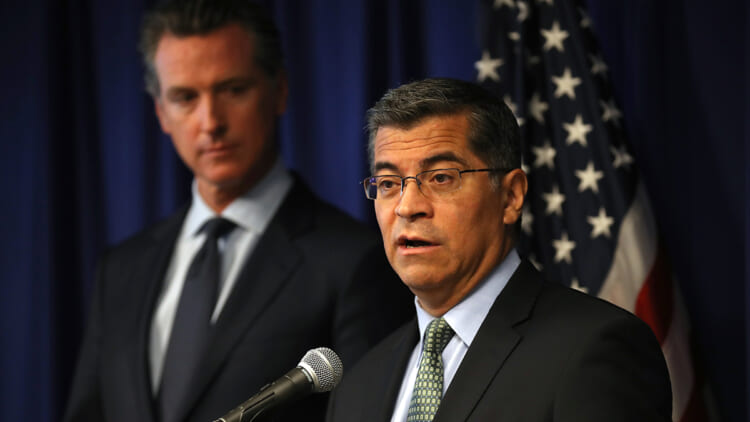 Republicans refused, saying they are taking advantage of California’s liberal ballot collection law that allows anyone to collect ballots from voters and deliver them to county election offices.

Due to the coronavirus and concerns about health safety at polling places, California for the first time mailed ballots for the Nov. 3 election to all active registered voters — more than 21 million people. The ballots come with pre-paid envelopes for voters to mail back, free of charge.

State law also allows county election officers to set up drop boxes throughout the county where people can drop off their ballots in person. The secure boxes can sometimes weigh more than 600 pounds and are monitored frequently by local election officials.

Republicans have set up their drop boxes at churches, gas stations and gun shops in at least three California counties. Some are identified as “secure ballot dropoff location,” while others say “approved and bought by the GOP.”

The party declined to say precisely how many boxes have been distributed and where they all have been placed.

Secretary of State Alex Padilla, a Democrat, said state law only allows county election officials to set up official ballot drop boxes, with rules for how often the ballots are retrieved. He said these unofficial drop boxes lack those protections, making them vulnerable to tampering.

Padilla had his chief legal counsel send Republicans a letter on Monday ordering them to remove those boxes by Thursday. He also ordered them to provide the state with the names, addresses and birthdays of all voters who have already dropped off ballots.

Attorney General Xavier Becerra, also a Democrat, went further, threatening to prosecute “anyone who knowingly engages in the tampering or misuse of a vote.”

“We hope that the message goes out loud and clear to anyone who is trying to improperly solicit, obtain, and manage a citizen’s vote that they are subject to prosecution,” Becerra said. “I’m trying to be careful with how I say this, but the reports we are hearing are disturbing.”

Padilla declined to speculate on why Republicans would be collecting votes via unofficial drop boxes.

“Our interest is in protecting the integrity of this election,” he said.

Barajas said the party’s drop boxes just provide voters with “another opportunity” to cast their ballots.

In a news release, the California Republican Party said state law does not specifically ban them from collecting ballots in a box. They say the law only prevents tampering or forging ballots and that people collecting the ballots cannot be paid for doing it.

“It appears Republicans are well within their right to collect ballots in this manner. It’s just that Democrats don’t like it,” Republican state Sen. Melissa Melendez posted to her official Twitter account.

The controversy surfaced during the weekend after state election officials received reports of the boxes in Fresno, Los Angeles and Orange counties, all areas with highly competitive U.S. House races. Democrats have blasted the use of the unofficial boxes and say they fear Republicans could use them to gather and discard ballots.

In California, state law says voters who can’t return their ballots themselves can ask anyone else to do it for them. Previously, people who returned a ballot for someone else also had to sign it and list their relationship to the voter. But a separate law passed in 2018 eliminated that requirement.

In Orange County, which is home to 3 million people between Los Angeles and San Diego, a regional field director for the state GOP posed for a photo with one of the boxes. The image posted to social media showed him wearing a face covering supporting the congressional campaign of Michelle Steel, a Republican county supervisor.

Orange County Registrar of Voters Neal Kelley said official drop boxes are clearly recognizable and carry official county elections logo. He said it wasn’t clear how many voters had used unofficial boxes but after receiving reports about them, he notified the state and district attorney’s office, which is investigating.

Rachel Potucek, a spokeswoman for the Democratic Party of Orange County, said she didn’t know what Republicans planned to do with the ballots they collected and worried they could target Democratic areas with boxes to suppress votes.

There also were reports of GOP drop boxes at a church in the Los Angeles County community of Castaic and at various locations in Fresno County in California’s farm-rich Central Valley.

Fresno County Republicans said they will remove the boxes and ballots will be turned in to county election officials, which was always the plan, the Sacramento Bee reported.