Tracey Brown was leading her social studies class when a Constitution lesson turned to talk of racial justice.

A teacher in Florida has been removed from her classroom after she made controversial comments during a virtual social studies lesson with students.

Tracey Brown, of Poinciana High School, was recorded on Microsoft Teams leading her class when a lesson about the Constitution turned to the topic of racial justice in America and the Black Lives Matter movement.

In part of the recorded discussion, Brown replies to a student, saying, “You’re implying that Black lives are more important than anyone else, and I have a problem with that.”

As their talk heats up, the teacher aggressively tells the student: “What you don’t know about me could fill a friggin’ swimming pool.”

Brown went on to share how “I was 16 years old, and I was attacked on a MARTA train by a gang — wearing bandannas, gang signs, language … of Blacks in Metro Atlanta! So I have as much right as anyone else to dislike Blacks for what happened to me.” 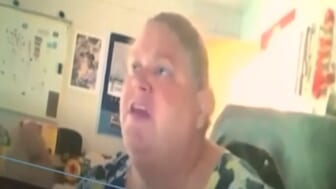 Also Read:
Florida teacher caught on video saying she has a right to ‘dislike Blacks’

She then adds, “However, I am a little bit more educated than probably the average member of that gang put together, and I was raised that skin tone is nothing but pigment. It has nothing to do with what is on the inside.”

Brown has been removed from her classroom and is not working with children while the incident is being investigated.

Also Read:
Florida teacher caught on video saying she has a right to ‘dislike Blacks’

A local news site is reporting that students submitted the video through an online platform called “Let’s Talk” that was originally created for students and parents to submit school-related questions during the pandemic.

Another teacher at the school, Tamika Lyles, who is also president of the Osceola County Democratic Black Caucus, said Brown’s words are concerning.

As of press time, Brown has not commented to any news outlets about her remarks.