‘Belly of the Beast’ doc exposes illegal sterilizations in California

The U.S. has a painful history of forced sterilizations, particularly with Black women such as civil rights activist Fannie Lou Hamer. Belly of the Beast is a PBS documentary that showcases just how much the brutal practice isn’t consigned to the past, but an ever-present violation.

Belly of the Beast is a 10-year investigative documentary that exposes modern-day eugenics in California correctional facilities despite the procedure being banned. Kelli Dillon, Co-Chairperson for the Empowerment Congress Southeast Neighborhood Council, anchors the doc as it is framed around her experience.

Read More: Black nurse speaks out after being identified as ICE whistleblower

Dillon was 24 years old in 2001 and incarcerated in a California correctional facility. She was sterilized without her consent.

“It really did take a moment for me to come forward, because not only there was a huge amount of shame, even though I was the one who was victimized, but there was a lot of shame,” Dillion explains in an exclusive interview with theGrio.

“There’s still a lot of pain that was involved. I wasn’t ready for that to come up every time I would be here to talk about it in the matter of how it affected [me] or how I was living with it. It just sat in the middle of my throat.”

However, Dillion felt compelled to take action by partnering up with Cynthia Chandler, a human rights lawyer, to fight for reproductive justice. She helped push for legislation that would prohibit California and its institutions from carrying out sterilizations. 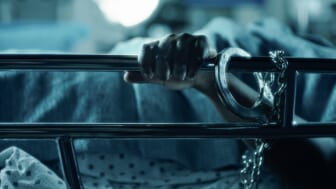 “Personally myself, I felt that if I did not testify, if I did not advocate that not only would more women be victimized by this method of population control, racism and all these other things that come with it, that there’s generations of children and children of color that you needed to be born, that would not be born,” Dillon says.

“So, I just felt like the call of action was larger than myself.”

Belly of the Beast is directed by Erika Cohn, who is a Peabody, Emmy and DGA Award-winning filmmaker. She details why the doc took a decade to complete, including whistleblowers who were fearful to come forward.

“I experienced the levels of secrecy and privacy these institutions hide behind, which makes it so incredibly difficult to uncover abuses of power and state-sponsored violence,” Cohn details.

“We often think about those who are in prison and not necessarily those who work for the facility. And in the case of the nurses in our film, It was very difficult to find people who would be willing to speak on camera about their experiences working for the prison on the record because of fear of retaliation.”

It was important to her that the documentary humanized the women who have not only been violated, but those who are still incarcerated.

“This film was really made for and with people who are in prison and the drive and the passion that all of us had in exposing this,” Cohn says.

Angela Tucker is one of the producers of Belly of the Beast and shares what drew her to the project. She invokes Hamer and the desire to amplify the discussion about forced sterilizations.

“I heard stories like that and always thought someone should make a film about this. So when I saw Kelli’s footage, I thought this was an opportunity to tell a story about a Black woman that would be complicated and important and that would be real and raw, which was something that I was really interested in being a part of,” she says.

As theGrio reported, forced sterilizations were a source of national controversy in September when Dawn Wooten, a Black nurse, claimed that the ICE detention center where she worked was performing mass hysterectomies. She described the doctor as a “uterus collector.”

The story receded from the front pages but Tucker wants a more engaged public.

“We still have a lot more work to get people to understand that this is something that we need to take action around,” Tucker says.

Belly of the Beast premieres on Independent Lens on PBS on Monday, November 23 at 10 pm ET (check local listings). The film will also be available to stream for free on the PBS Video App.