Fantasia announces pregnancy: ‘Keep trying and you will conceive’

The singer and her husband had been enduring fertility challenges and sought medical help.

R&B singer Fantasia is expecting a child with her husband, Kendall Taylor.

The couple, who have been married for five years, had been enduring fertility challenges and sought medical help.

“They were talking about in-vitro. They were going to do artificial insemination,” Taylor said. “I hear what y’all saying, but I know what God showed me.”

The couple announced their pregnancy on their Instagram Live show, Taylor Talks, which they air weekly. 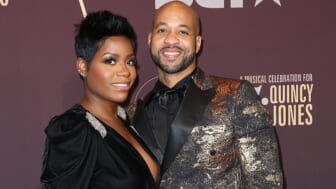 “Keep trying, and you will conceive,” Fantasia said.

“Only God can do it,” Taylor echoed.

The 36-year-old American Idol winner has two children from previous relationships: a daughter, Zion, and a son, Dallas. She didn’t disclose the sex of her soon-to-come bundle of joy.

Taylor, a businessman and motivational speaker, also has an adult son and two grandsons.

The pair had been trying for years to naturally conceive a child together.

“I was trying to hide it as hard as I could from y’all,” she said. “I promise you. Just keep waiting on God. It was really starting to depress me and him.”

The couple met in 2015 and dated for only three weeks before getting engaged.

In a November 2019 interview with Essence, Fantasia said, “I will have to say kudos to [my husband] because when he came into my life, he brought out a Fantasia that I didn’t even know was there.”

“It started with my whole transition and my fasting time,” she revealed, “because if I didn’t sit back and take the time to realize who I was and let go of some stuff, then I would have lost him.”

Fantasia’s most recent studio album, Sketchbook, was released in 2019. It was nominated for an NAACP Image Award for Outstanding Album.

During the coronavirus pandemic, the singer has also been sharing recipes from her new vegan lifestyle.