The late actor stars alongside Viola Davis in the film adaptation of August Wilson's 1982 play. 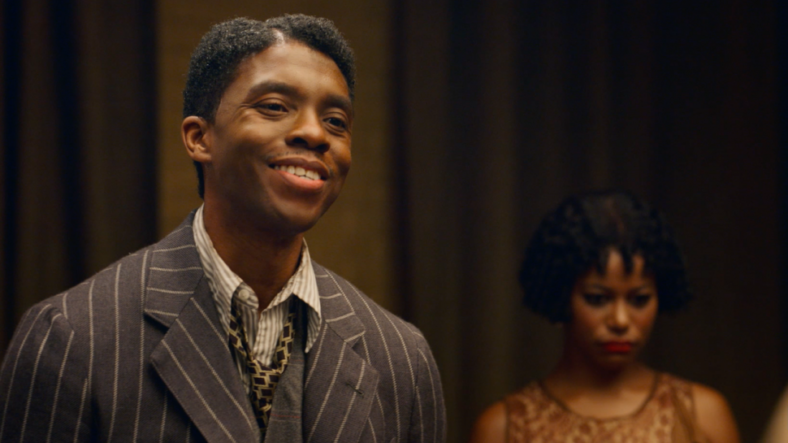 Ma Rainey’s Black Bottom is finally out on Netflix and the film that stars Viola Davis and Chadwick Boseman is nothing short of triumphant.

Executive produced by Denzel Washington and directed by George C. Wolfe, the film adaptation of the 1982 stage play by August Wilson is ripe with remarkable performances from the cast that also includes Colman Domingo, Glynn Turman, Michael Potts, and Taylour Paige.

Set in Chicago during the summer of 1927, the film is a celebration of the transformative power of the blues; as well as an exploration of themes that have transcended the times and are still relevant today, such as race, culture, faith, sexuality, music, and trauma.

Black Bottom follows the “fearless and fiery” Ma Rainey as she and her band come to town to attempt a one-day recording session of her music. Despite the crushing circumstances of the time, Ma Rainey is a force in full control of her power, which she knows comes from her voice and reputation as “Mother of the Blues.”

Davis truly transformed for the role, and her efforts pay off in every way as she channels the woman who won’t take an ounce of bullshit from anyone; be it a police officer after a fender bender or her white manager’s trying to control her music. She makes it clear that her opinion is the only one that matters and anyone or anything that gets in her way is easily expendable.

She nods at the uppity men and women whose eyebrows furl when she strolls through the lobby of a hotel, switching her sizable hips while arm-in-arm with her lover, Dussie Mae (Paige). She dismisses the notion that her best days are behind her; swatting away the idea that music is changing or that her protege, Bessie Smith, is outshining her.

She cares nothing about the white men who only need her to sell records and try to shortchange her every step of the way; and she has no patience for anyone else’s input, least of all, the opinion of her coronet player, Levee (played by Chadwick Boseman).

Boseman plays the ambitious cornet player who is determined to stake his own claim on the music industry. The performance is truly remarkable and worthy of all the posthumous award chatter it’s already prompting. The actor infuses so much depth to the character who exemplifies the internal torment carried around and covered up by so many Black folks at any given time.

We quickly realize that Levee’s jovial attitude and smooth talking is just the lid over the pot of emotions simmering under the surface. Like many of Wilson’s characters, Levee is instantly familiar and he draws you in from the start. Underneath his flashy exterior,

Levee is desperate for approval and validation and he craves the agency Ma has over every decision she makes. He’s easily ruffled by ribbing from his bandmates Cutler (Domingo), Slow Dragg (Potts), and Toledo (Turman) and his emotions escalate over time, leading to an explosive and heartbreaking climax.

Whether you have consumed every installment of The Century Plays or are new to the world of August Wilson, watching Ma Rainey’s Black Bottom is an emotional experience. Ma Rainey has no illusions about the fact that despite her success, she’s still just a Black woman in the world when she steps off the stage.

Levee seems to believe that success will somehow change the stakes and transform him from victim to hero and in that quest, he’s victimized all over again; this time by the white producer underpaying him for songs and then giving them to white artists to record.

The film highlights how our community contends with trauma and how the wounds never truly turn to scars but remain raw, delicate, and one moment away from being ripped open.

It’s also emotional because we know that this is the last performance of Boseman’s short life and we now realize the immense pain he must have endured to pull it off. Despite that knowledge, his performance is so strong we temporarily forget that we are still mourning him and there’s something healing about watching him shine so brightly.