Vanessa Bryant, widow of Kobe Bryant, documented the process of her newest tattoo on Instagram, a small but meaningful piece in memory of her daughter, Gianna.

The 38-year-old revealed a forearm tattoo that reads “Mambacita,” the nickname affectionately given to her teenage daughter, who tragically died in a helicopter crash alongside her father and seven others.

Completed by tattoo artist Nikkol Hurtado, the fresh ink was placed on Bryant’s forearm. In script lettering, the nickname is spelled out with a heart over the letter “i” and a butterfly at the end of the word, on the tail of the final “a.”

She shared the final piece with the caption, “Mambacita,” with a red heart emoji, butterfly emoji, and hashtags of her daughter’s name, nickname and jersey number.

In a video upload, she detailed the process behind the recent tattoo. Bryant explained the type of permanent ink she received and how long the entire session took.

“All my tatts are single needle to keep the lines clean)…jokingly referred to as “vato style” in this video since I’m still using this older historical process,” she wrote. “First tatt of the night done…. 8 hours to decide on the font… Tatt took 5 min.”

It’s been over a year since Kobe Bryant and his daughter Gianna, 13, tragically passed in a helicopter crash last Jan. 26. While the world publicly mourned the loss of an icon, Vanessa is opening up to the outlet about her terrible loss and how she has coped through the past year.

Bryant was interviewed for the ‘Women Changing the World’ issue, exclusively telling the magazine, “This pain is unimaginable [but] you just have to get up and push forward. Lying in bed crying isn’t going to change the fact that my family will never be the same again. But getting out of bed and pushing forward is going to make the day better for my girls and for me. So that’s what I do.”

Bryant is still incredibly busy with her daughters, Natalia, Bianka, and Capri, and opens up about how much they mean to her in the interview. She explains, “My girls help me smile through the pain. They give me strength.” 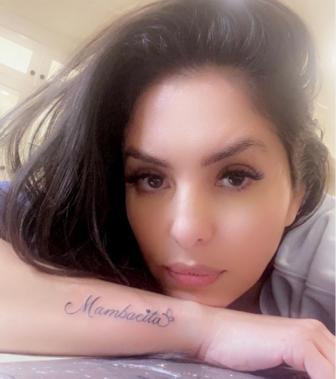 Bryant’s 18-year-old daughter Natalia also got a new tattoo. Notated as her fourth by the Instagram caption, the teenager got the word “muse” inked on her finger.

“I wanted my boo boo’s @kobebryant sweet message transferred on me,” she wrote in the caption accompanying a set of videos, in which the tattoo artist can be seen inking a spot on her neck.

“@nikkohurtado came through for me, Thank you! ” Bryant added, along with the hashtags “#inked #messagetransfer #BooBoo #throwback.”

“Shoutout to @nikkohurtado for coming over and helping me get my Gigi’s sweet message transferred on me. #throwbacktoFebruary,” she wrote in another post, revealing that she actually received the new ink back in February, just weeks after the tragic helicopter crash.