From slavery to segregation, the Senate filibuster is very much racist

OPINION: The parliamentary procedure that has been making headlines as of late has been used as a tool to disenfranchise Black voters 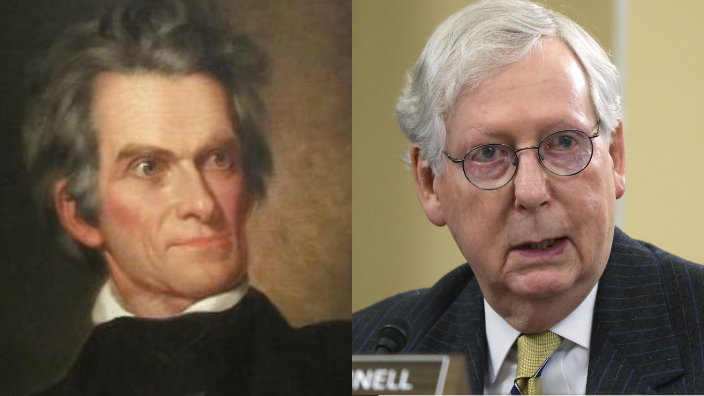 Most people try not to focus on what the U.S. Senate does, because candidly, it does very little. Over the past decade or more, the Senate has become a hostile, divisive, and ultra political body under the force of now Republican minority leader Mitch McConnell.

Simply put, the Senate passes little legislation. When it does, it is almost always a straight party-line vote. From the confirmation of our last controversial Supreme Court Justice, Amy Coney Barrett, to the most recent example of the $1.9 trillion COVID-19 stimulus bill, we saw a partisan vote on both sides.

Also Read:
From slavery to segregation, the Senate filibuster is very much racist

Republicans for Barrett 52-48 and Democrats for the COVID-19 relief bill 51-49. This is not how the United States Senate should work. The Senate is broken and everybody knows it.

One of the biggest reasons why the Senate is so broken is a parliamentary procedure known as the filibuster, which has become a hot topic in Washington and national politics given the Senate’s inaction and calls to abolish the procedure over claims of its racist origin.

The framers of the Constitution created the august body of the United States Senate to protect the rights of individual states and safeguard minority opinion in a system of government designed to honor federalism. The framers intended the Senate to be an independent body of responsible citizens who would share power with both the executive branch and the lower chamber of the legislative branch, the U.S. House of Representatives.

McConnell quipped the other day that, “the Senate filibuster has no racial history at all. None. There’s no dispute among historians about that.” McConnell knows better. What he said is a flat-out lie.

Former President Barack Obama called out the filibuster’s inherent racism at the funeral of Congressman John R. Lewis last summer: “If all this takes eliminating the filibuster, another Jim Crow relic, in order to secure the God-given rights of every American, then that’s what we should do.”

That is the question — to eliminate or not eliminate the Filibuster.

On Thursday at his first formal White House press conference as commander-in-chief, President Joe Biden said that he agrees with his former boss that the filibuster is a relic of the Jim Crow era, yet he does not think we should eliminate it.

The fact of the matter is that the Republicans have made it very clear that they do not intend to work in a bipartisan fashion on voting rights, immigration reform, climate change and a myriad of other bills that Biden wants to pass. With a 50-50 senate evenly split, Vice President Kamala Harris is the tie-breaking vote. And that is assuming Senator Joe Manchin, known as the Senate’s premier moderate, votes with them on these initiatives (which is a big assumption).

The history of the filibuster is clear: it has been used time and time again by both political parties since the founding of the republic. The difference is that the filibuster pre-20th century, versus the filibuster of the 20th century (specifically starting in the Woodrow Wilson era literally) targeted legislation designed to help advance the civil and voting rights of Black people.

According to Princeton University historian Kevin Kruse, “It has (the filibuster) been a tool used overwhelmingly by racists.” Adam Jentleson, author of the book “Kill Switch: The Rise of the Modern Senate and the Crippling of American Democracy,” and an expert on the filibuster and Senate procedures writes, “If there was any ambiguity in the antebellum era, it certainly shed that during the Jim Crow era — where it was widely taken for granted that the filibuster was directly tied to [blocking] civil rights.”

In their book, “Politics or Principle: Filibustering in the United States Senate,” professors Sarah Binder and Steven Smith, identified every Senate bill between 1917 and 1994 that they believe died because of the filibuster. Among these, half were civil rights bills, including anti-lynching bills proposed between 1922 and 1935.

Binder and Smith also found that most Senators’ views on filibuster reform were tightly linked to their own views on civil rights. Pro-reform senators mostly in the northeast and west tended to support civil rights bills, while anti-reform legislators, mostly in the south, opposed them.

So while one can safely argue that the early Senate’s position on the filibuster may not have had racist origins (except maybe South Carolina’s Senator John C. Calhoun, who used it to defeat anti-slavery bills in the mid-1800s), the modern filibuster — the one that allows Mitch McConnell to impose a 60-vote requirement on anything Biden and Democrats propose — clearly does.

And there is no clearer example than the one that Joe Biden called out at his first press conference around “voting rights” legislation sweeping the nation in the southern states and otherwise to severely limit and disenfranchise Black and Brown voters.

In response to a question about Voting Rights during Thursday’s press conference, Biden slammed proposed Republican legislators across the country who have proposed bills that would make it illegal to serve water and food to voters waiting in line and close voting polls during times when most working people clock out of work, among other restrictions many have called out as voter suppression, or as Stacey Abrams recently called, “Jim Crow in a suit and tie.”

“What I’m worried about is how un-American this whole initiative is. It’s sick,” said Biden.

“This makes Jim Crow look like Jim Eagle. I mean, this is gigantic, what they’re trying to do. And it cannot be sustained. I’m going to do everything in my power, along with my friends in the House and the Senate, to keep that from becoming the law.”

The bottom line is that the filibuster serves no good purpose. Particularly in a Senate so evenly divided. This nation right now is in need of action. We need major legislation to move forward. The dissent of the minority party is not in jeopardy — they are 50 in equal number.

But President Biden cannot have it both ways. He spoke boldly on Thursday about the Jim Crow nature of the age-old rule, yet in another breath said that he did not want to see it eliminated altogether. Black and Brown voters put Joe Biden in the White House. And we are the ones most likely to be negatively impacted by keeping the filibuster alive. We must collectively raise our voices and demand to Biden and Democrats that the filibuster must go.