Opinion: White male Democratic leaders have to actually walk the talk of diversity and opportunity within their party 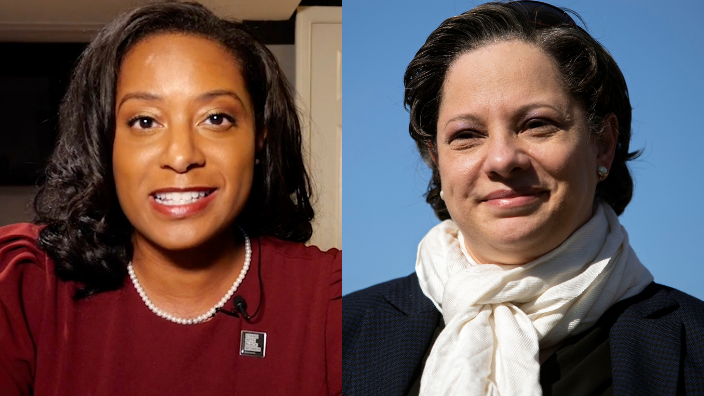 Right here in the Commonwealth of Virginia, my home state for over 30 years, we remain the only southern state to have elected a Black man as governor since Reconstruction. Let me repeat: the only state, and L. Douglas Wilder won his historic election as Virginia’s first Black executive when I was in college back in 1989.

Fast forward to 2021 Virginia. Once a powerfully predictable red state, and important electoral college state throughout the 1990s and 2000s with Republican governors like George Allen, Jim Gilmore, and Bob McDonnell running the state government and the GOP was in charge of the state legislature for years.

Not so much anymore.

Virginia is now a very blue progressive southern state that has elected nothing but democrats statewide since 2009, and both U.S. Senators, the majority of Congressional districts and we have a woman speaker of the House of Delegates as well as a woman of color as majority leader. This is a huge shift that happened, in part, thanks to one person: Donald J. Trump.

Trump’s racist and sexist rhetoric helped mobilize women in the suburbs and turn a once red Virginia, blue. Women mobilized after the 2016 election and they ran for office in large numbers never seen before. For Black women, the impact has been huge at the local and mayoral levels over the past five years.

According to a recent CNN report,  “Political observers say the growing number of Black female mayors signals they are gaining electoral strength and appealing to voters in races that have been historically won by white men. They say Black women have proven they are relatable with an ability to lead, organize and engage new voters. Black women are also speaking out against the racial disparities in their communities at a time when the nation is having to reckon with systemic racism and police violence against Black people.”

So why doesn’t that translate for Black women who want to run for governor or the U.S. Senate as current Florida Congresswoman Val Demmings is considering doing as early as 2022?

Again, I come back to my home state of Virginia and our current gubernatorial race and the Democratic field has two viable Black female candidates (both elected state legislators) running, yet they are lagging in the polls and in fundraising. Why? It’s typical; Black women usually cannot raise the large amounts of funding needed for a successful statewide race, or to win in a contested primary where male candidates, as with former Virginia Governor Terry McAuliffe, usually seize the early dollars, big party boss endorsements and media attention.

To that point, I was annoyed when Governor McAuliffe announced he was running again (Virginia does not allow governors to serve back-to-back terms) when we had two Black female candidates (State Senator Jennifer McClellan and former Delegate Jennifer Carroll Foy) who were viable and had a good shot at winning their party’s nomination.

Now, their chances seem dim, as recent polling data show McAuliffe ahead by 40%, to their single-digit numbers (8% and 6% respectively). What could have been a historic run for one of these women, and for the Commonwealth of Virginia is now likely to end up with yet another white man as the party standard-bearer.

McAuliffe, who has deep ties to the national Democratic Party dating back to the Clinton years, could have sat this one out and mentored and worked to get one of these sisters elected. Instead, the crafty, unabashed former governor (a millionaire in his own right) locked up early Democratic money, and the endorsements of Virginia’s elder Black states woman (State Delegate Louise Lucas) and the current Democratic Governor Ralph Northam.

This leaves the Black women candidates who were once viable, unlikely to prevail during the primary.

Here’s the bottom line: if we want to see more Black women elected to the U.S. Senate (currently there are none serving, and there are 24 white female U.S. Senators and 3 of Asian/Hispanic descent), and eventually to governorships (my bet is on Stacey Abrams winning in Georgia if she decides to run in 2022, but it will not be easy with the new anti-voting rights passed since 2020), we need to build a bench of successful Black women mayors, congresswomen, and statewide officials like attorney general, secretary of state, etc., so that they can raise the early money, get the party backing, and lead their tickets.

More importantly, however, is to follow the Harris model. The now-vice president was in the circles where she could tap into California’s wealthy donors, and she had a powerful mentor and ally in Speaker Willie Brown. All of those factors, plus her brilliance and bravery to run for statewide office got her elected, first as attorney general, then as a United States Senator.

Lastly, white male Democrat Party leaders like McAullife and Northam here in Virginia have to decide that they will actually walk the talk of diversity and opportunity. Too bad they blew a really great one, right here in 2021 Virginia.