If ever there was a singular moment to underscore the painful reality that America is decidedly cleaved into two halves, it is Memorial Day. For many, the last Monday in May has always been reserved for reflecting upon the lives and sacrifices made by military personnel who died in service to their country.

This week on the Dear Culture Podcast we’re asking: Dear Culture, how are we still paying for the lies of white history?

Moriba is also the host of the Southern Law Poverty Center podcast, Sounds Like Hate. The new season documents Bennett’s fight to remove Confederate monuments in Florence, Alabama. Moriba and Bennett talked with us about the removal of Confederate monuments being imperative if the country hopes to ever achieve an honest reckoning with its past and begin a new path forward.

“Imagine going to pay your taxes, going to do your business and having to look at a statue that was literally erected to intimidate Black people and for no other reason than that,” said Bennett. “They were fighting to own us and that’s a slap in the face that we can no longer live with.”

Moriba agreed and added that for too long, history has remembered the lie of the “Lost Cause” which posits that the rejection of federal interference in the lives of private citizens was the primary cause of the Civil War and not slavery.

“It (monuments) represents a false history. It’s all lies,” said Moriba. “The truth is 200,000 Black men and some Black women fought in the struggle for freedom and they earned it by bravery and sacrifice and it was done through the Emancipation Proclamation. They stepped forward to volunteer and fight for their freedom and that’s not the story that’s told when you look at these confederate monuments.” 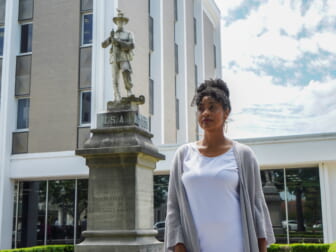 The monument where Bennett lives was erected in 1903, nearly four decades after the Confederacy lost the war. For Bennett, the battle to remove the monuments is both racialized and gendered.

“Historically in Alabama, Black women are erased,” said Bennett. “It’s always a battle to fight the violence of patriarchy because it’s our everyday experience as women. The only anti-protest bill written in Alabama was written for the movement that I started.”

Though we’ve honored the lives of those who’ve served their country this Memorial Day, Dear Culture encourages you to also honor the full truth of American history and the names of those who fought for our freedom without recognition and certainly without a monument.

“It’s not as simple as getting angry and ripping it down,” said Bennett. “It is a political process that takes time.”