The "fully-realized" character Zendaya plays is featured in a promo video parodying ESPN's "30 for 30" with LeBron James and other Looney Tunes.

Fans only have to wait about a month for the Space Jam sequel to hit theaters! In a new clip making the rounds this week, Zendaya makes her debut as Lola Bunny in Space Jam: A New Legacy.

As theGrio reported in April, Zendaya is joining the Space Jam family in the highly-anticipated sequel, voicing one of the original film’s most iconic characters. The film’s official Twitter account tweeted a GIF of Lola Bunny a few months ago and tagged the Euphoria star, writing, “Welcome to the Jam, Zendaya.” The account recently shared a new promotional clip in which they parody ESPN’s popular 30 for 30 series, previewing some of the dynamics in the film, while giving fans a sneak peek at all the players, including Zendaya’s new iteration of Lola Bunny.

Like the popular ESPN series, the parody sees the Space Jam characters and Tunes sitting down to recall their version of the film’s events in what is titled 30 for 30: The Bunny and the Goat. When Bugs Bunny calls himself the face of the team — saying, “It’s called the Tune Squad, not LeBron Squad” — Zendaya’s Lola Bunny makes her debut, noting, “So cute to watch them bicker when everyone knows this is Lola’s team.”

Later, when speaking to James’ challenge leading them, Lola Bunny appears again, saying, “Makes it sound like LeBron had to save us … we’re the best teammates he’s ever had.”

“When it’s crunch time,” she shares, “the ball is gonna be in my paws.”

James then seems to confirm all of Lola Bunny’s boasting throughout the clip. When asked what the key to bringing the team together is, he says, “Two words: Lola Bunny. Greatest sidekick ever” over clips of her playing on the court. She cheekily responds: “You know, don’t love the sidekick label but, we’ll let it go because of LeBron.”

As theGrio previously reported, Lola Bunny looks a little different form her original iteration in 1996’s Space Jam. TheGrio‘s Ashley Terrell reported in April that director Malcolm D. Lee hopes to reintroduce the character as a “fully realized” version compared to the original film. In an interview with Entertainment Weekly, Lee opened up about his feelings watching the original film and what immediately struck him about Lola Bunny, sharing, “Lola was not politically correct. This is a kids’ movie, why is she in a crop top? It just felt unnecessary, but at the same time, there’s a long history of that in cartoons.” 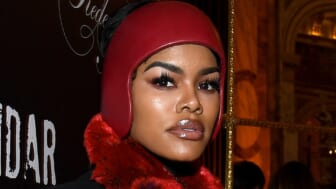 Speaking to the reworking of the character, Lee explained, “She probably has the most human characteristics of the Tunes; she doesn’t have a thing like a carrot or a lisp or a stutter. We reworked a lot of things, not only her look, like making sure she had an appropriate length on her shorts and was feminine without being objectified, but gave her a real voice. For us, it was, let’s ground her athletic prowess, her leadership skills, and make her as full a character as the others.”

“This is 2021,” Lee added. “It’s important to reflect the authenticity of strong, capable female characters.”