The Temple trustees' board chair said Wingard was chosen because he has a vision for the future of education.

Wingard, 49, grew up in West Chester, Pennsylvania and lives in Chestnut Hill, Pennsylvania, both suburbs of Philadelphia. He still currently works at Columbia as a professor and will begin his new post as president of more than 37,000 students at the Philly-located Temple on July 1.

The Temple University board of trustees approved Wingard’s appointment in a unanimous vote, according to the The Philadelphia Inquirer.

Mitchell Morgan, chair of the trustees’ board, said Wingard was chosen because he has a vision for the future of education and understands that the industry is ever-evolving. “Dr. Wingard recognized that and wrote about that before COVID hit,” he said in a statement to The Inquirer.

Wingard, who was chosen after a 10-month search, says he was “honored by the board’s selection.”

“Temple will continue to provide its diverse and talented community of learners an unparalleled, accessible opportunity to leverage a best-in-class network of faculty and academic resources in support of dynamic and lifelong professional goals,” he said. “At a time when the uncertainty of the global marketplace is challenging the future of learning and work, Temple will lead the progression of a career readiness agenda, built on a foundation of innovation and adaptability, to advance knowledge for relevant impact.”

“I look forward to the work that we will undertake together,” he continued, “and I believe that for all this institution has achieved over the past 137 years, Temple University’s best days are yet to come.” 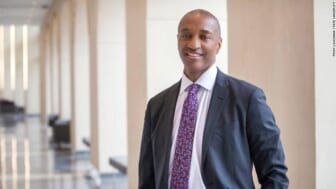 “What I’m really most excited about is I met students here who really are amazing, and for me, this position is all about what we can do to help students and give people access and opportunity in higher education,” said Tate, who currently serves as provost and executive vice president for academic affairs at the University of South Carolina.

TheGrio’s Jamal A. Hansberry contributed to this report.