3 dead, including toddler after shooting at Florida Publix

The shooting occurred around 11:30 a.m. at The Crossroads shopping center located in Royal Palm Beach

On Thursday morning, a shooting has occurred at a local Publix grocery store in Royal Palm Beach, and officials say one of the victims is a toddler.

According to WPTV News, three people were shot at the grocery store in Royal Palm Beach, Florida. Officials say one of the deceased was the shooter. The incident occurred around 11:30 a.m. at the Crossroads shopping center located at the corner of Royal Palm Beach Blvd at Okeechobee Blvd.

“It is possible they know each other,” said Spokeswoman Teri Barbera.

The names of the victims have not been released as the investigation is ongoing.

The grocery store released a statement, saying, “Our thoughts are with those who are impacted by this tragedy,” per CNN News.

The news comes just days after a Florida man allegedly shot and killed two women. As reported by theGrio, a Fort Lauderdale man has been identified as the culprit in another case of senseless killings.

On Saturday, 53-year-old Jeffrey Henley turned himself in to police at the Broward County Jail after fatally shooting two women and injuring another, according to WSVN.

After midnight on Saturday, Henley targeted two of his exes, who were also the mothers of his children. He first drove to the 900 block of Northwest 11th Place, where his ex-wife India Crawford and their six-year-old daughter shared with Henley lived.

India Crawford and a friend had just arrived at the house when Henley opened fire on the vehicle they were in, killing both women, WSVN reports.

“Pow, pow, pow’ in the back, ‘pow, pow, pow’ in the front, and I said, ‘Jeff, you done killed my daughter!’” Gail Crawford, who is the mother of the slain woman, described the horrific incident to WSVN. The six-year-old child reportedly ran outside when the shooting started. 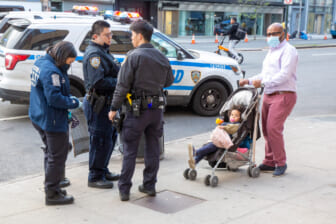 Henley then drove to a residence on Northwest 36th Avenue in nearby Lauderdale Lakes, where his ex and their teenage daughter lived. The woman who survived the attack identified herself as Sandy to the police.

She told WSVN that her daughter came into her room, alerting her that her father was outside. Henley told Sandy to come out because he wanted to speak with her, but Sandy stayed inside. Henley then fired through the door, striking Sandy in the chest.

Sandy says that her daughter is traumatized by what she witnessed. “My daughter is not really talking right now because she’s kind of shocked, what happened, what her daddy did, ’cause she couldn’t believe it,” said Sandy.