"I'm hoping folks all around the state will learn more about it and celebrate it together," said the bill's champion, Rep. Larry Selders.

Sytonia Reid   |
House Bill 554, which was introduced by Democratic state Rep. Larry Selders (above), would reserve the third Saturday of each June as a holiday in Louisiana.
Loading the player...

After passing unanimously in the Louisiana House and Senate on Monday, a bill that would make Juneteenth an official state holiday awaits the signature of Louisiana Governor John Bel Edwards.

If signed into law, House Bill 554 would reserve the third Saturday of each June as a holiday in Louisiana, KLFY reports. The bill was introduced by Democratic state Rep. Larry Selders, who heralded it as a bipartisan victory.

“It’s exciting for me to see this kind of bipartisan effort that we can all celebrate together,” Selders told USA Today Network Tuesday.

“I really hope making Juneteenth an official state holiday raises awareness about this important event in American history,” he said. “I’m hoping folks all around the state will learn more about it and celebrate it together.” 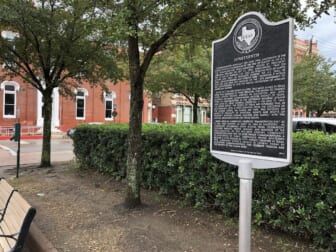 Juneteenth honors the memory of enslaved peoples in Galveston, Texas, who did not receive news of their freedom until June 19, 1865 — two and half years after President Abraham Lincoln issued the Emancipation Proclamation on January 1, 1863. With the arrival of troops led by Union General Gordon Granger, they officially learned:

“The people of Texas are informed that in accordance with a Proclamation from the Executive of the United States, all slaves are free. This involves an absolute equality of rights and rights of property between former masters and slaves, and the connection heretofore existing between them becomes that between employer and hired laborer.”

On Tuesday, James retweeted a video from the Louisiana Black Caucus, in which he spoke of the success of the Juneteenth state holiday bill: “We passed a bill that mandates that Juneteenth will be a state holiday. Larry Selders passed that bill yesterday, and it’s on its way to the governor’s desk.”

“The celebration of Juneteenth is special because we celebrate the day when the last of us were freed,” said Jason Roberts, executive of the Now and Then African American Museum in Baton Rouge. “I think that if everyone actually participated in Juneteenth and got in the spirit of it, we would all come together a lot easier.”

As previously mentioned, Texas was the first state in the U.S. to make Juneteenth an official holiday in 1979. Louisiana is poised to join Virginia and New York, which already observe Juneteenth as paid state holidays. As theGrio previously reported, Oregon and Washington passed legislation earlier in 2021 to make the observation of Juneteenth official in their states.