“I just try to stay up here and take the high road in every situation,” said Harvey

Lori Harvey has mastered the art of staying in the press without uttering a single word. But this week in a rare interview, she finally addressed ex-boyfriend Future’s decision to take a dig at her in his lyrics.

“Tell Steve Harvey I don’t want her,” Future rapped in a leaked track that immediately went viral. “One thing I never seen was a bitch leave.” 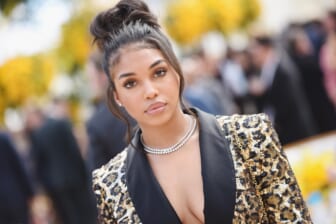 He then takes another dig at Harvey’s new boyfriend, Hollywood heartthrob Michael B. Jordan, saying, “Must’ve forgot to tell her daddy she begged me not to leave. Put baguettes on ya ankles damn near up to ya knees / She didn’t have a choice, but to go f**k a lame after me.”

Harvey and the Atlanta based emcee broke up last August after less than a year of dating. In a new interview with Bustle, she takes a detour from her usual code of silence and explains why she’s chosen to avoid publicly clapping back at those who speak about her and her love life.

“I think they get from me that I try to just not let any type of negativity or rumors or anything like that make me stoop down to that level and go back and forth with it or whatever. Just maintain my position of I know who I am, I know what’s going on,” the 24-year-old model explained.

“I just try to stay up here and take the high road in every situation,” she continued. “So I think that would probably be what they get from me, because I am private, so I like to just give enough.”

In regards to her new relationship with Jordan she said, “We know there are people that love and support us and want to see us. So [we want to] give just enough, but keep the majority of it just for us. We’re trying to find a balance.” 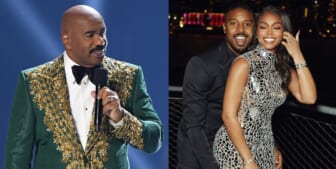 While some may be content to stand on the sidelines and speculate about her life, Harvey’s attention appears to be more focused on building her brand, which now includes her new skincare line.

“I definitely want to have my hand in everything at some point,” she clarified to the publication. “I think Rihanna has done an amazing job and laid some really great groundwork. I love how she’s kind of done everything and done it so, so well. I think I’ll definitely dabble in different parts of the beauty industry and fashion industry.”

As we previously reported, in April, Jordan shared his thoughts about his new love in People Magazine, explaining why he opted to go public this time about his relationship.

“I’m still private,” he admitted. “And I want to protect that, but it just felt like it was a moment of just wanting to put it out there and move on…I am extremely happy.”

The Without Remorse actor also explained that his many years of experience in the public eye ultimately led to his decision.

“I think when you get older, you feel more comfortable about the [public nature] of the business that we’re in,” Jordan concluded. “So for me, it was a moment to, I guess, take ownership of that and then get back to work.”