In one of the latest episodes of “In These Twitter Streets,” Marc Lamont Hill and conservative commentator CJ Pearson have been going at it since late Thursday night following a public debate on critical race theory.

On Thursday, he appeared on the Black News Channel’s  “Black News Tonight” hosted by Hill to discuss his opposition to the teaching of critical race theory. 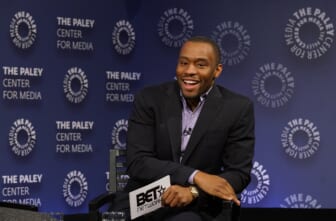 Also Read:
Marc Lamont Hill confronts race theory critic: ‘Name something you like about being white?’

Pearson tagged Hill in a Friday evening tweet following the interview, writing, “While @marclamonthill sought to misconstrue the words of MLK Jr. to justify hate, I made one thing clear. Critical Race Theory is nothing more than taxpayer funded anti-white racism. It’s not education.”

Initially, Hill responded in a simple retweet with no comment other than a few laughing emojis, but the journalist and progressive commentator soon followed that up with a rebuttal, hinting that Pearson doesn’t know what Critical Race Theory is.

“He says he has read CRT, taken courses, and been on panels. I asked him a simple question: name ONE Critical Race Theory author, book, or article title. Here’s what he said,” Hill tweeted a video clip of the interview just after midnight on Friday.

In response to Hill’s request for an example of an academic work of CRT or an author who writes it, Pearson pointed to Nikole Hannah-Jones’ indelible 1,619 Project, saying that Hill himself has cited it as CRT.

Hill then said that he actually has not categorized the 1,619 Project as CRT and then pivoted to a question about Rev. Dr. Martin Luther King’s assertion that “most white people are subconscious racists,” asking whether Pearson agrees with it.

“We can parse Martin Luther King’s words all day long but the fact of the matter is that any type of racism, whether it’s directed at Black people, white people, Asian people, yellow people, green people, it’s wrong. It has no place in our schools and it certainly doesn’t have a place in being taxpayer funded,” said Pearson. 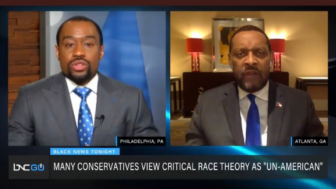 As the feud circulated on Twitter, more influencers in the political and media arenas chimed in, including journalist Joy Reid.

“The answer to Marc’s question is “no.” None of these people who have made attacking Critical Race Theory their life’s work HAVE ANY IDEA WHAT CRITICAL RACE THEORY IS!!!!,” Reid wrote on Friday.

Hannah-Jones herself made an appearance in the comment section of one of Hill’s tweets, writing, “This was both great and depressing at the same time. P.S: He hasn’t read the 1619 Project either.”

For the record, the American Bar Association describes Critical Race Theory as a “malleable” or evolving practice that “acknowledges that the legacy of slavery, segregation, and the imposition of second-class citizenship on Black Americans and other people of color continue to permeate the social fabric of this nation.”

Its architects include minds such as Kimberle Crenshaw, Derrick Bell, Richard Delgado, Alan Freeman, and Cheryl Harris, to name a few.