The movie, titled "Playing Through," to illustrate the life of Ann Gregory, the first Black woman to play in a national golf championship event

A film depicting the first Black woman to tee up in a national golfing championship is in the works.

The story about Ann Gregory, known as “The Queen of Negro Women’s Golf,” will be told by following a pivotal golf match between Gregory, the first Black woman to play in a U.S. Golf Association event, and a fictional white female golfer from the South named Babs Whatling.

The film titled Playing Through hails from writer Curtis Jordan, a former rowing coach at Princeton University who now lives in Sarasota. His own mother and her real-life golf match with Gregory in the 1950s were the inspiration for Whatling’s character.

“My mom was a pusher of barriers and adventurous and she was over the top with her life, and she would let you know about it. But she never talked about this. I don’t think it was a very bright light in her life,” Jordan said as reported by Sarasota Magazine.

“When I found out about Ann Gregory, I thought, why don’t I know more about this woman? Why isn’t she more celebrated for her courage and bravery and the things that she did?” Jordan recalls. “That was the driving factor for me to write this.”

The Playing Through synopsis on IMDB reads, “Late in her career, Ann Gregory finds the courage to be the first woman of color to enter the USGA Women’s Amateur. She collides with Babs Whatling, a privileged white woman from the south who is searching for her own identity.”

Jordan has teamed with producer Peter Odiorne to develop the project. Actress Andia Winslow has been tapped to play Ann Gregory with Julia Rae as Babs Whatling.

Director Balbinka Korzeniowska is currently filming the $1 million – $2 million project in Sarasota at the Laurel Oak Country Club. According to the report, locations also include the Historic Spanish Point, the Waffle Stop restaurant and several homes in the Rosemary District.

There’s reportedly no distribution plan for the film but Odiorne says the Playing Through team is open to selling it to Hulu, Netflix or A24. 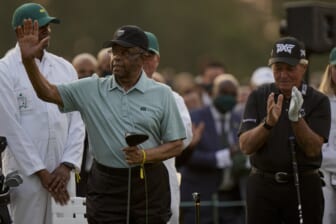 Gregory died in 1991 at age 77. She was the first Black female golfer to compete on the national scene. Emmy-award-winning sports journalist Michael Eaves noted on Twitter that in 1971, Gregory “finished runner-up at the Senior Women’s Amateur.”

“[I]n 1989, at the age of 76 and competing against a field of 50 women, she won the gold medal in the U.S. National Senior Olympics, beating her competitors by 44 strokes. Gregory won nearly 300 tournaments,” he added.

“She was a determined and confident golfer,” said Renee Powell of Canton, Ohio, who turned pro in 1967, “and she was such a warmhearted, inspirational individual that she helped me by her example, by the kind of person she was. Not enough people know about Ann. She set the stage for every other black female who came into golf after her.”

Powell is part of a shortlist of Black women who have made history in women’s golf, including Eoline Thornton, of Long Beach, Calif., who played in the 1958 Women’s Amateur, and Althea Gibson, who became the first African American to win a Grand Slam title in 1956. The following year she won both Wimbledon and the US Nationals and won both again in 1958.

The Associated Press voted her as Female Athlete of the Year in both years. In 1963 she became the first Black to play on the LPGA tour.