Kelis shares details about farm life and her journey to motherhood

"It wasn’t the easiest,” Kelis said

Grammy-nominated singer Kelis is sharing details about her journey through motherhood and raising a newborn baby for the third time.

The multitalented artist, songwriter and chef opened up about motherhood with Harper’s BAZAAR.

In addition to being the mother of her 8-month-old daughter, Kelis is the mother of two boys, 5-year-old Shepherd and 11-year-old Knight, according to PEOPLE. She shares her daughter and son Shepherd with her husband Mike Mora, and shares her son Knight with ex-husband Nas.

Kelis shared how nutrition played a big part in her life and helped her build back her strength as a mother.

“Looking at how I was going to build myself back up, the first thing I started doing was the food, and I was able to get myself back to a place where I felt physically strong again,” Kelis told Harper’s BAZAAR.

The mom of three went on to talk about what it was like to transition from city life in Los Angeles to farm life in Temecula, California with her husband in the middle of a pandemic.

She shared how the farming transition made her think more about her historical ties and how people in the Black community don’t have access to foods that would best serve them.

“We were proud agriculturists,” Kelis told Harper’s BAZAAR. “The idea of farm-to-table is not a new, trendy thing. That’s an African concept. We were thriving because we were able to work the land in such a way that it was feeding our people and for generations.” 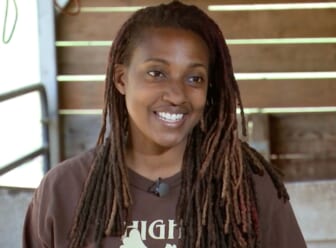 Kelis explained how she sometimes gets pushback from family and friends saying, “‘Black folks don’t eat that.’ But we do…Because if it’s soul food, that’s not really soul food. That’s American food, and there’s nothing wrong with it. I love it. But when was the last time you saw cheese in any of the diaspora? When there is assimilation you lose something. Something has to be lost in order to properly assimilate. Part of being here is wanting to get some of that back and wanting to be able to have my children understand the balance of that. It’s not to say we never have a burger. That’s ridiculous. But how do we gain some control back? How do I control the quality of what we’re intaking?”

In addition to opening up in the article, Kelis shared an adorable photo on instagram of baby toes and supporters shared lots of kind words and celebratory messages.

“Congratulations! That milkshake still bringing the boys to the yard I see!!!” one instagram user wrote.

Some were even surprised to learn about the new addition to her family.

“You had another baby?! When?!” another user wrote.

Kelis is known widely and has performed around the globe. Her popular song from 2003, “Milkshake,” continues to be a hit as she creates new waves of impact through her work.