Brian Everett Anderson, 19, is seen with his hands up before dropping to the ground after being tasered by an officer, who also kneed him in the stomach

Police in Ocean City, Maryland have gone viral for aggressively enforcing a ban against vaping on the boardwalk on Saturday evening.

In the viral videos of the incident, a Black teenager is seen with his hands up and then drops to the ground after being tasered by an officer, who also repeatedly kneed the teen in the stomach.

The incident left four teenagers arrested, including the teen who was tasered and is seen being carried away from the scene hog-tied by officers. The teenager has been identified as 19-year-old Brian Everett Anderson.

In a news release, the Ocean City Police Department said that officers were on foot patrol when they observed a large group vaping on the boardwalk. In their release, they say that as the group walked away, officers observed the same teen begin to vape again. 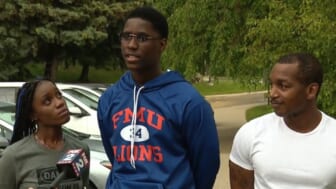 According to the department, “during the course of the interaction, the male refused to provide his proof of identification and became disorderly. A large crowd of people began to form around the officers.”

The officers then attempted to arrest the young man for “failure to provide necessary identification for the violation of the local ordinance.”

Anderson was later charged with disorderly conduct, resist/interfere with arrest, assault second degree, and failure to provide proof of identity. He was seen by a Maryland District Court Commissioner and released on his own recognizance.

Another 19-year-old, Kamere Day, was charged with disorderly conduct, obstructing and hindering, failure to obey a reasonable and lawful order, resist/interfere with arrest, and assault second-degree.

Another teen, John Lewis, was arrested when officers accused him of attempting to strike a public safety aide with a bicycle.

A fourth teen was arrested when, according to the report, he was “observed” standing on “private property next to two “no trespassing signs”. 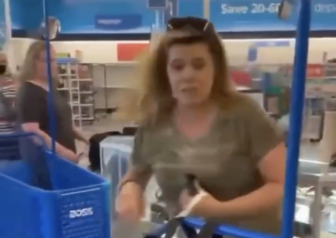 The release concludes by saying, “We are aware of the social media videos circulating regarding this incident. Our officers are permitted to use force, per their training, to overcome exhibited resistance.”

The department notes that all uses of force will “go through a multi-level examination by the Assistant Patrol Commander, the Division Commander, and then by the Office of Professional Standards.”

Despite the account provided by the Ocean City Police Department, social media users maintain that the use of force by officers and public safety aides was unreasonable.

“The police brutality video from Ocean City is horrific,” one user wrote. “That officer should be arrested IMMEDIATELY. To the young Black men who intervened & put their lives on the line to save that young person – your courage is as immeasurable as it is heartbreaking.”